The species is native to southern Madagascar (province of Toliara) where it grows on calcareous stony soils from the sea level up to about 500 m of altitude.

The generic name is after some the diminutive of Uncaria, genus with which there might exist some affinities; the species is honoured to Walter Röösli (1948), Swiss optician lover of botany who during several expeditions in the most arid zones of Madagascar has discovered and collected specimens of numerous new species.

The Uncarina roeoesliana Rauh (1996) is a little ramified erect deciduous shrub, 1-2 m tall, with a basal underground enlargement (caudex) but that in cultivation is usually partially exposed, and stem and branches with greyish bark that with the time tends to enlarge.

Very variable leaves, on a 5-14 long petiole, alternate and grouped at the apex of the branches, can be entire, subcordate with irregularly undulated margin, or palmate-lobate, of dark green colour above, paler below, pubescent and slightly sticky, 5-12 cm long and 5-10 cm broad. 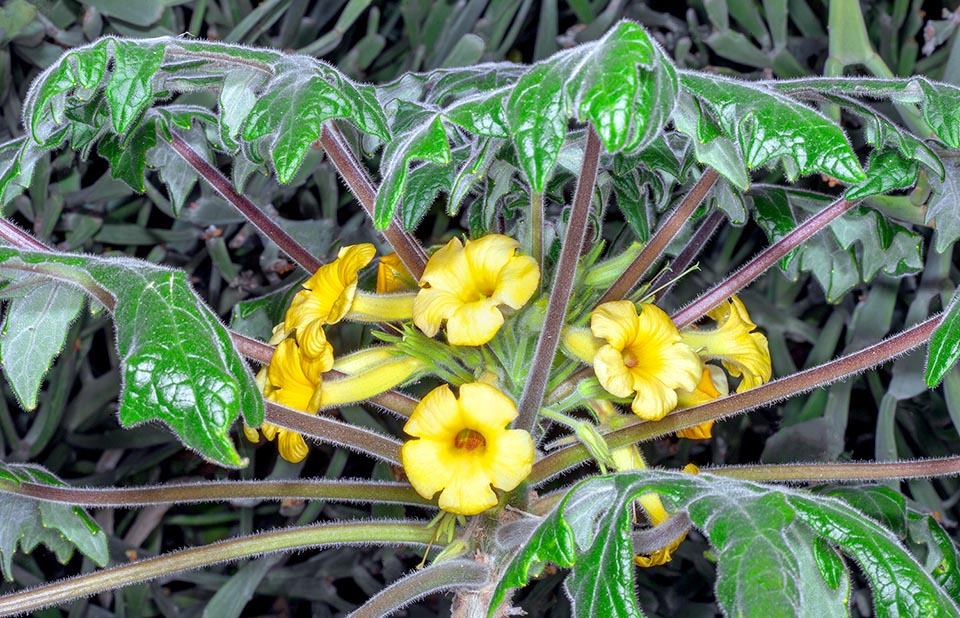 Uncarina roeoesliana is a deciduous shrub of Madagascar erect and little ramified, 1-2 m tall, with an underground basal enlargement, usually partially visible in cultivation. The flowers, ephemeral, but produced continuously from spring to autumn, are hermaphrodite, but not self-pollinating and in cultivation it’s necessary to proceed manually © Giuseppe Mazza

The flowers, ephemeral, but produced continuously from spring to autumn, are hermaphrodite, but not self-pollinating, in nature the crossed pollination is done by Coleoptera, in cultivation it is necessary to proceed manually “squeezing” the anthers to get out the sticky pollen and to deposit it with a toothpick between the two lobes of the stigma.

The fruits are ovoid capsules, 4-5 cm long, of green colour, pubescent, covered by long and thin protuberances similar to spines with apex provided of tiny hooks that facilitate the dispersion by clinging tenaciously to the skin of the animals, and not only, in fact its is advisable to handle them with gloves or tongs in order to avoid painful hassles.

It reproduces by seed, previously kept in water for two days, placed in particularly draining and aerated loam maintained humid at the temperature of 24-28 °C, and by cutting, but with low percentage of germination and rooting. The seeds germinate starting from 1-2 weeks, but some may take much more time, and the first blooming may happen after 1-2 years from the sowing.

Species of easy cultivation and fast growth, very appreciated by the lovers of caudiciformes, requires full sun or at most a slight shade, particularly draining and aerated rich loam and abundant watering during the vegetative period, but allowing the substratum to dry up before giving water again. In winter to limit it to 1-2 light watering per month to be done in the morning in warm and sunny days. It requires high temperatures in summer, preferably over the 14 °C in winter, even if it can stand, perfectly dry, lower values, even close to 0 °C, but only if exceptional and for very short period.

→ To appreciate the biodiversity within PEDALIACEAE family please click here.