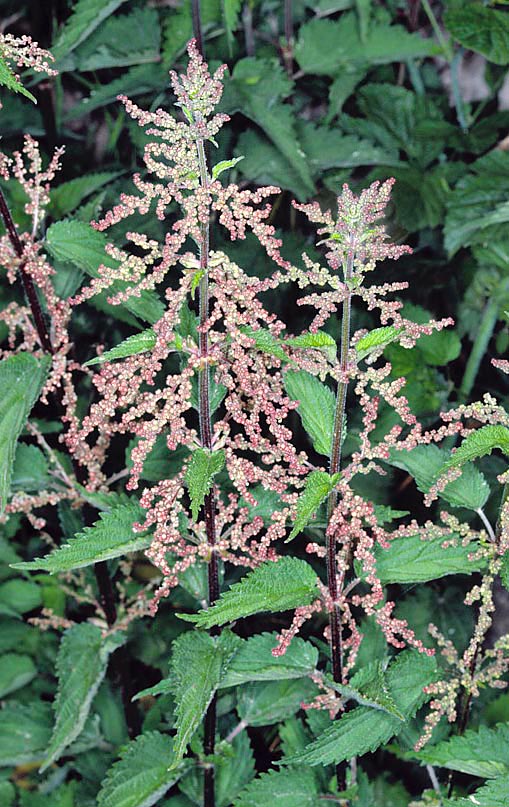 Urtica dioica with male inflorescences. It can be 120 cm tall © Giuseppe Mazza

The genus Urtica includes about a hundred of species of the temperate and subtropical regions of the world. Urtica dioica is a sub-cosmopolite plant, spontaneous or naturalized in most countries of the planet.

The name of the genus “urtica” comes from the Latin terms “ùro-ùrere” = I sting, to sting, and from “tàctus” = touch, that is, plant stinging when touched. The name of the species “dioica” comes from the Greek “di”= two, and from “oikos” = house, (two houses), due to the fact that this species has separate male and female flowers, on different plants.

The common nettle (Urtica dioica L. 1753) is a very well known perennial herbaceous plant, usually dioecious, even if, rarely, do appear monoecious specimens with male and female flowers and even hermaphrodite flowers, equipped with a ramified, stoloniferous, yellow, fibrous rhizome and erect, striated, herbaceous, 30-120 cm tall, tetragonal and grooved upward, bristly stems; big, opposite, ovate-oblong, acuminate, cordate at the base, serrated-jagged, with edge 2-4 times longer than wide, with petiole longer from 2/3 to 4/5 of the lamina, 4-stipuled, equipped with stinging hairs, leaves.

The flowers are very small, yellow greenish, merged in glomerules grouped in 2-3 cm racemes, simple or ramose, arcuate, patent and more or less pendulous, at the axil of the upper leaves, with four hirsute tepals and persistent in the fruit.

The genetic evolution has done so that the male flowers have the four stamina remaining scrunched till when the pollen is ripe; at that point they stretch suddenly throwing in the air the pollinic granules so that these ones are dispersed around for favouring the anemophilous (done by the wind) fecundation of the female plants.

The flowering is concentrated from May to November. The fruits are tiny oval brown-olivaster achenes with a tuft of hairs at the apex.

If we look closely at a plant of nettle we see that it is covered by transparent hairs. Many of them, observed at the microscope, appear rigid, with the shape of long-necked ampoules. The basal part, bigger, calcareous and hard, operates as reservoir of formic acid and amines (histamine, serotonin, choline, etc.). The upper part, on the contrary, is siliceous and fragile, ready to crumble at the slightest bump with an oblique fracture line which facilitates its penetration under the skin and the injection of the liquid pushed by the basal cells determining, as an old text relates, “a stinging pain, followed by white swelling in the touched part, which becomes red later on”.

In the past with bunches of nettle they used to flog the back or the limbs for fighting the rheumatic pains, lumbagos and sciaticas. It is a very common species loving the soils tendentially alkaline, fresh and rich of organic substance and of nitrates (nitrophilous), of phosphorus, potassium and of iron oxides, and which grows in the abandoned grounds, on the waste piles, in the thickets, along the banks of ditches, in places frequented by the man and by the animals. It is an extremely common grass from the plain up to 1800 m (rarely up to 2300 m) of altitude.

Female plant with inflorescence detail. Males emit the pollen suddenly and give it to the wind. Ladies wait for it with starry stigmas © Giuseppe Mazza

Already in the Middle-Age, but surely also before (there are documents relating the use of the nettles already during the Bronze Age and in the old Egypt) from the stems of the nettles they got long fibres, similar to those of the hemp and for such purpose they were cultivated also in the ‘800 and during the autarchy periods for producing tissues (ramie). The relator of the third voyage of Capt. Cook wrote in the XVIII century that the inhabitants of Kamchatka, peninsula sited at the eastern extremity of Russia bordered by the Pacific Ocean, known as the Land of the bears and of the volcanoes, that without the nettles they would have not been able to survive. In fact, they employed these plants for fabricating fishing nets, cordages, sewing thread and heavy gear, etc. For this purpose, they did cut the stems of nettle in August, macerated them, dried them and during their long winters spun their fibres. 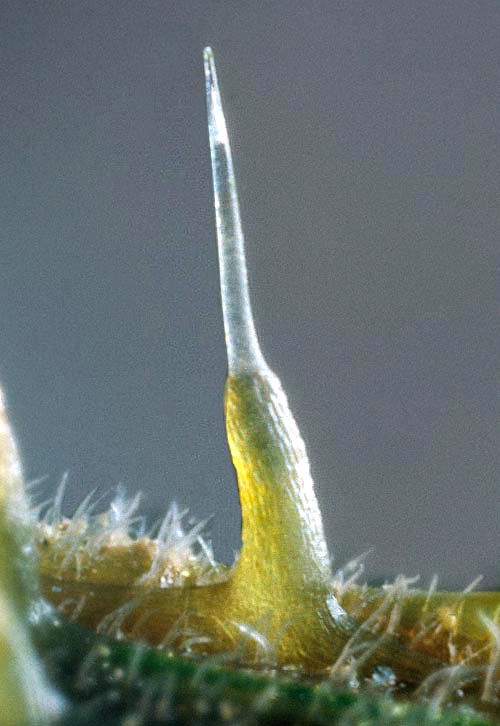 Much enlarged stinging hair. The wide and calcareous base contains formic acid. The siliceous tip breaks at the bump with an oblique break line © Giuseppe Mazza

The relator did add that the thread obtained was of a quality little lower than that of the hemp and of the flax and did get white more easily.

In many North European countries the nettle was cultivated for long time as fodder for livestock and still now, after shedding, the fresh nettles, rich of carotenes are administered to the courtyard animals for colouring more the skin, the flesh and the eggs.

In the biological agriculture, they employ the nettles, after maceration in water for 123 hours, for obtaining an antiparasitic useful against the aphids of the crops.

The nettle is also an excellent vegetable: the leaves, absolutely harmless after a short blanching, and then squeezed, are used for preparing risottos, soups, omelettes, tortellini, salted pies, stuffing, etc.

In the countryside, it was chopped and added to the mash of the hens for increasing the production and the colour of the eggs, to the fodder to increase the production of fat in the milk and to colour the butter of a nice yellow. Before taking the horses to the market, they were nourished with nettle hay in order to get the hair shiny and strong.

Mixed to the bread or to the bran, it was given to the pullets for preventing the infections and for furnishing a proteins and vitamins concentrate useful for stimulating a fast growth. This is still now a utilization of great relevance, especially in the biological agriculture, seen the right prohibitions of the use of meat meal in the fodders for animals.

From the maceration of its stems it is possible to get a resistant textile fibre and the industry uses the whole plant for getting its chlorophyll. It is also used in dyeing for silk and wool. In this genus of plants there are species far more dangerous: the Urtica urentissima of Java Island and the Urtica ferox of New Zealand cause very violent reactions and convulsions due to the tremendous pains which sensitize the affected part for months.

Also among the home-grown species (Urtica atrovirens, Urtica membracea, Urtica pilulifera, Urtica rupestris,) there is the small Urtica urens which lives in soils very rich of nitrogenous substances, much more stinging than the common nettle and therefore much care is to be done for avoiding it!

In phytotherapy they use the whole plant collected from April to September, the rhizomes collected in autumn (for decoction with the vinegar to be used externally against alopecia and dandruff) and in some countries (Germany) also the fruits, containing an oil rich of unsaturated fatty acids, phytostimulins, phytohormones, tocopherol, are used in form of alcoholic extracts, as corroborant and tonic. Besides the remarkable richness in chlorophyll, in the nettle are present numerous active principles (tannins, nitrates, formic and salicylic acids, flavonoids, carotenoids, iron, vitamins C, B, K1) which confer it diuretic, astringent, haemostatic, depurative, anti-rheumatic, anti-haemorrhagic, hypoglycaemic, antiseborrheic properties. 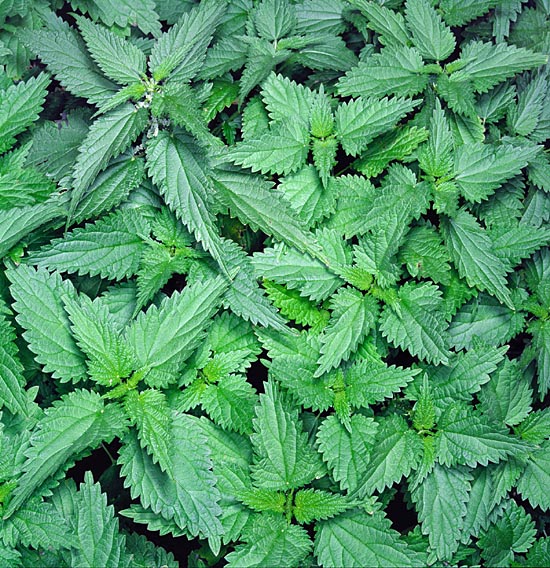 Edible boiled leaves. In the old times they made textile fibre from the stems © Giuseppe Mazza

Recent studies, still going on, appear to confirm a remarkable activity of the extracts of the rhizomes and of the roots of nettle for the reduction of the hypertrophy or benign adenoma of the prostate.

In Belgium, since some years, some researchers of the Catholic University of Leuven are experiencing the fungicidal action of a protein, the lectin, contained in the rhizomes and roots of the nettle, capable to interfere in the forming of cellular wall of the parasitic fungi; the aim is that, through techniques of genetic engineering, of transferring the lectin of the nettle to other plants for rendering them more resistant to the fungal diseases.

In one of the splendid paintings by Albrecht Dürer, famous German incisor and painter of the late fifteenth century, is shown an Angel offering the Creator a plant of nettle.

What better testimony we might recall about the consideration in which was kept this precious wild plant?

One full teaspoon boiled for 5 minutes in a cup of water. To drink three cups per day sweetening with honey and adding some drops of lemon juice.

Juice of fresh plant extracted by blending and filtering. One tablespoon thrice a day for at least 4-6 weeks.

→ To appreciate the biodiversity within URTICACEAE family please click here.

Urtica dioica was last modified: May 19th, 2020 by Giuseppe Mazza