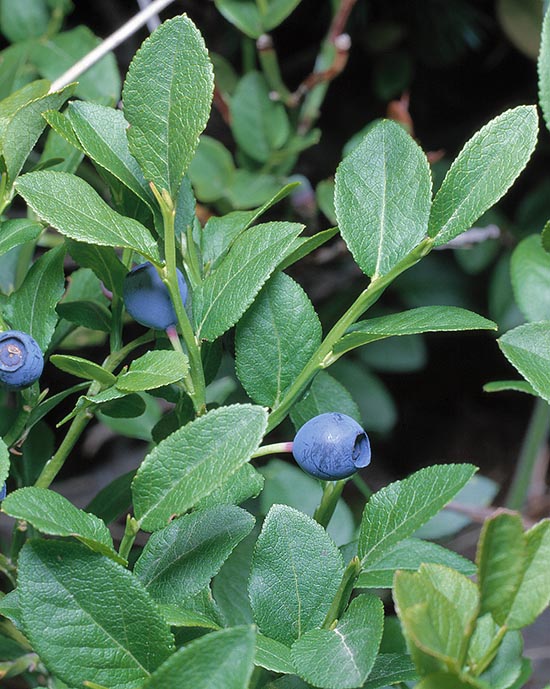 The name of the genus is thought to come from a “Vaccinia nigra”, cited by Theocritus and recalled by Virgil, or perhaps from a corruption of the term “baccinium”, due to the numerous pseudo-berries produced; the name of the species is a clear reference to a certain resemblance of the plant to the fructiferous small branches of the myrtle (Latin “myrtus”, hence, “myrtillus” = small myrtle).

Deciduous subshrub, perennial, 10-40 (<60) cm tall, with elongated rhizome (underground stem), creeping, with reddish bark, and erect or ascending small branches acutely tetragon, green and glabrous, carrying alternate leaves, of 10-30 x 6-18 mm, thin to membranous to rigid depending on the age, oval or elliptic, acute, toothed on the margin, paler green below and crossed by reticulated nervations, with 1 mm petiole.

The blooming occurs from June to July; the flowers develop at the axil of the leaves, usually isolated or rarely two, pendulous, with (4) 5-7 mm petioles, usually reddened; urceolate-globose 4 x5 (6) mm corolla, with restricted to 5 small revolute lobes mouth, greenish and pinkish-vinous shaded. The flowers are rich of nectar and are very much visited by the bees.

The European blueberry is a characteristic element, usually gregarious, of the sparse woods of conifers (especially of European spruce) of siliceous soil, of the moors, the shrublands, the grasslands, the humid locations, always on humified and acidic soil (1200-2000, rarely 300-2800 m). All European species of the genus Vaccinium are more or less calcifugal, that means are species growing on acidic soil. The blueberry is considered by the forester and the woodsmen as a harmful species because its intricate and thick cover, which occupies vast spaces of the wood soil, hinders the natural dissemination and the development of the small plants of the trees and of the shrubs.

In the same places of growth lives also a species similar to the blueberry, which is the Bog bilberry Vaccinium uliginosum or false blueberry, easy to distinguish as having spatulate leaves, rounded at the apex and with entire margins, stems with circular section, flowers grouped in 4-5 and bigger fruits, ovoid with whitish, flourish and insipid pulp. For some Authors, the berries are edible (even if of poor value), for others, they cause, if consumed in quantity, vomit, hot flushes, vertigoes, swallowing difficulties, and other.

For phytotherapeutical purposes, the leaves are collected in spring, but specially during the flowering period (VI-VII) and are dried, preferably in the shade in aerated locations.

The fruits are collected when ripe (VIII-IX) and are dried n the oven at moderate temperature to be conserved in dark glass pots, hermetically sealed. 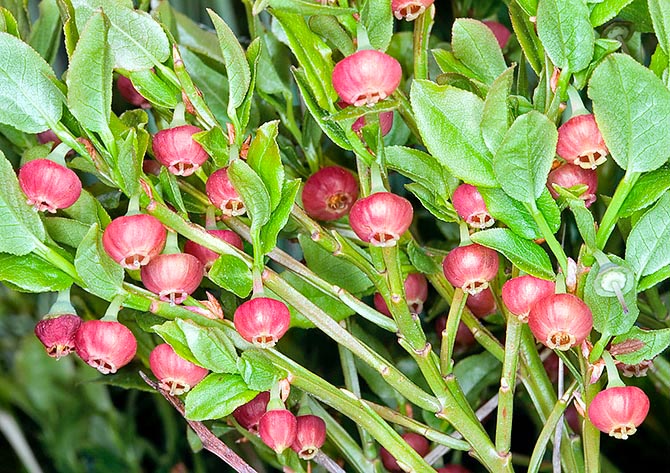 Reddish hanging flowers, rich of nectar, open in June-July and are much visited by bees © Giuseppe Mazza

They contain numerous substances, including catechinic tannins, among which dimeric proanthocyanidins, anthocyanosides, flavonoids, iridoids, pectin, myrtillin (also known as vegetal insulin), organic acids (lactic, malic, quinic, tartaric, nicotinic, citric, quinolinic), and phenolic acids (chlorogenic, caffeic, p-Coumaric, ferulic), fructose, saccharose, provitamin A, vitamin B complex, vitamin C, iron and manganese. They are utilized as astringent against the persisting diarrhoeas and the acute enteritis, regulators of the intestinal function, and in the cases of irritable colon, mouthwash in mouth diseases, antiplatelets, in the phlebitis and varicose veins, and in the capillary fragility, they protect the microcirculation from the damages of diabetes (diabetic retinopathies), and in the cases of nyctalopia to improve the night vision (this was suggested by the fact the RAF pilots during the Second World War, who consumed huge quantities of blueberry jam, had a better night vision) and for external use to favour the healings caused by burns.

The active principles of the leaves are the quinolizidinic alkaloids, tannins, the anthocyanosidic glucosides (vaccinin, ericolin and delphinidin, cyanidin, etc.), the enzyme arbutasi, ursolic acid, chrome and manganese. They hold diuretic, hypoglycaemic (decoction) properties useful in the cases of urine retention, atony, vesicles, cystitis and urethritis. I remind that the misuse or prolonged use of the leaves leads to intoxication by hydroquinone and to jaundice and anemia due to the change of the status of oxidation of the haemoglobin of the blood which diminishes its capacity to tie in reversible way the oxygen. The leaves are suggested for lowering the glycemic level in the cases of diabetes, the fruits (decoction or tincture) give good results as mouthwash in the oral diseases.

The anthocyanosides of the blueberry are present in numerous medicinal specialities with specific indications relevant to the fragility and the altered permeability of the blood capillaries, vascular disorders of the eye retina, high myopia, poor night or crepuscular vision. Preparations based on blueberry are used in the gastric ulcers and in the varicose ulcerations.

Since prehistory the blueberry was collected and consumed by the Neolithic populations as witnessed by the numerous findings of its fossil seeds in the excavations in pile-dwelling areas. The fruits are very much sought after for the preparation of healthy preserves, jams, syrups, sauces for boiled items, etc. Moreover, they are consumed fresh, with sugar, honey and wine. 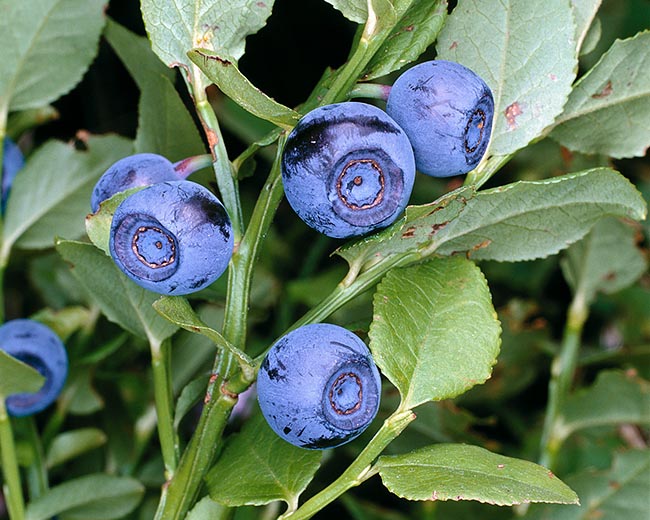 The fruits, besides tasty, have important medical virtues and give the E163 colouring © Giuseppe Mazza

In France, in the Vosges department, from the fermented pseudo-berries of blueberry they produce a typical liquor, analogous to the Kirschwasser (cherries liquor), called Heidelbeerwasser. In the fruit and vegetable shops and in the supermarkets are often found packages of fresh and frozen fruits with written “blueberries”, but actually they not the European blueberries but another species of North American origin, that is the Vaccinium corimbosum having much bigger and more juicy but much less tasty than those of “our” wild blueberries.

Yore, the leaves as well as the fruits were used for dying the tissues in green or blue; the blue anthocyans of the blueberry are still now used as natural food colouring and are identified under the acronym E 163. The red-violet juice of the fruits may be utilized as a litmus paper for establishing the pH as it becomes bright red in acidic ambient and green in the alkaline (basic) one. The fruits of the blueberry are sought as food by several species of birds such as the lesser whitethroat, the Alpine chough, the rock partridge, the Bohemian waxwing, the fieldfare, the blackbird, the song thrush, the black grouse, and the wood grouse.

Sweet antihemorrhagic paste, protector and reinforcer of the capillaries, useful for improving the eyesight due to its positive action on the retinal purple of the eye

The tip of a knife of dried and powdered fruits, blended with a teaspoon of honey. To consume five or six times per day.

Two tablespoons of fresh crushed fruits macerating with a teaspoon of juniper berries, in one litre of sweet or dessert red wine (i.e. Porto, Malvasia): leave resting one week. To filter and to drink a shot after meals.

→ To appreciate the biodiversity within the ERICACEAE family please click here.