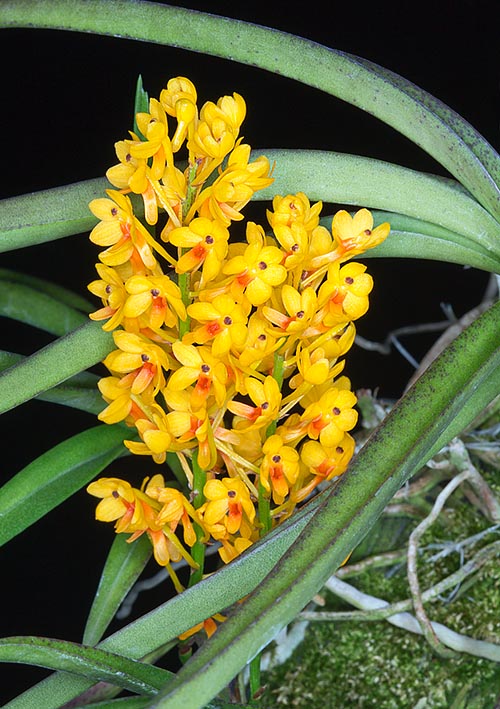 The species is native to the Moluccas (Sula), where it grows in the forests at low altitudes characterized by monsoonal climate.

The name of the genus is that in Sanskrit of the Vanda tessellata; the name of the species is the Latin adjective “aureus, a, um” = golden, of gold; with reference to the colour of the flowers.

It reproduces by seed, in vitro, and micropropagation. At amateurish level it can be reproduced by cutting the apical part of the stem, provided of a sufficient number of leaves and roots, and placing it in the compost maintained slightly humid in a location with high atmospheric humidity and temperature, 24-28 °C; the remaining part will produce a new stem.

Species with bright inflorescence frequently utilized in the hybridizations, requires high luminosity, also some hours of direct sun on the day, medium-high temperatures, with lowest night values of 18-20 °C, high humidity, 60-80%, and constantly moving air. During the growth period the watering must be regular and abundant, slightly reduced when in vegetative stasis in order to allow a slight resting period. For the watering and nebulisations is to be utilized rain water, by inversed osmosis or demineralised; the fertilizations, duly distributed and alternated, in way to avoid salts accumulation at the roots, are done during the vegetative period preferably with hydrosoluble balanced products with microelements, at half the dosage suggested in the package. It can be mounted on trunks, bark, cork raft or cultivated in pot or, preferably, in baskets with fragments of bark and big sized coal, in way to allow the roots to freely elongate and quickly dry up after the watering. Transplants and repotting are to be done, when strictly necessary, at the vegetative restart, which is signalled by the appearance of the new roots.