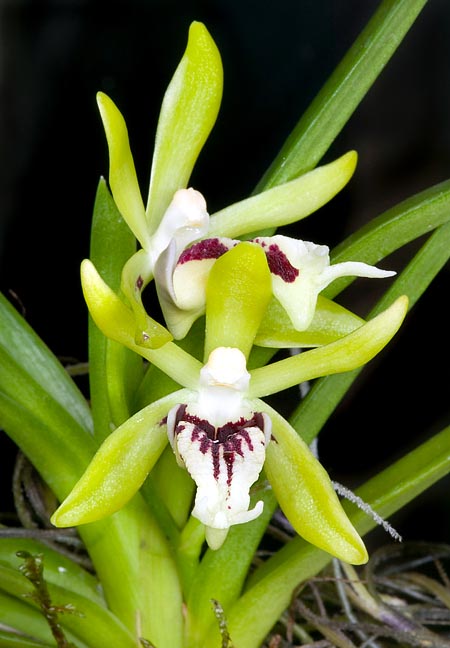 The species is native to Bangladesh, Bhutan, Cambodia, China (Tibet and Yunnan), India (Arunachal Pradesh, Assam, Darjeeling, Himachal, Jammu-Kashmir, Pradesh, Sikkim, and Uttaranchal), Myanmar, Nepal and Vietnam, where it grows in the humid forests between the 700 and the 2300 m of altitude.

The name of the genus is that in Sanskrit of the Vanda tessellata; the name of the species is the Latin adjective “cristatus, a, um” = crested.

The Vanda cristata Wall. ex Lindl. (1833) is a monopodial epiphytic species with alternate leaves imbricate at the base, distichous, coriaceeous, 8-15 cm long and 0,6-1,8 cm broad, curved with tridentate truncated apex.

In spring-summer, it produces, at the axil of the leaves 1-4 erect inflorescences, 3-5 cm long, carrying 1-3 waxy flowers, of 4-5 cm of diameter, perfumed, with sepals and petals of yellowish green colour and white or greenish yellow labellum with dots and striae from dark purple to brown red, of variable shape and colour even on the same plant, long lasting. Oblong dorsal sepal of 2-3 cm of length and 0,5-1 cm of breadth, lanceolate lateral sepals having the same size, oblong, falcate, petals, 2-3 cm long and 0,3-0,5 cm broad, trilobed fleshy labellum of the same size as the sepals with erect triangular lateral lobes and ovate central lobe, slightly rugged at the base and with two divaricated and pointed terminal appendices.

It reproduces by seed, in vitro, and by division with portions provided with leaves and roots; the plant which will form from the dormant buds of the lower part can be removed as soon as they have formed their own rooting apparatus.

Species of relatively easy cultivation with much particular flowers due to the shape of the labellum, it requires temperatures from cool to intermediate, with winter lows of 10-12 °C, even if it can stand some degree less for a short period, high and constant humidity, 60-80%, with a good air circulation, maximum luminosity, also direct sun in winter, and slight shade in summer.

The waterings must be frequent and abundant in summer, rather reduced in winter, utilizing, for the nebulisations too, rain water, or water obtained by reverse osmosis or demineralised; the fertilizations, during the vegetative time; are to be done with hydro-soluble balanced products, with microelements, at ¼ of the dosage suggested on the package, distributed and alternated in way to avoid salts accumulations at the roots.

It is to be preferably mounted on bark, raft of cork or of arborescent fern, if it is possible a high atmospheric humidity is to be kept, otherwise it is to be cultivated in pots or baskets with a compost which may be formed by medium-big sliced bark fragments and charcoal with possible addition of sphagnum for maintaining the humidity if that of the air is rather low. Movings, repottings and divisions are to be done in the moment when the new roots take form.