The species is native to Myanmar and Thailand where it grows on the trees of the humid forests of broad-leaved trees at low and medium altitudes.

The name of the genus is the one in Sanskrit of the Vanda tessellata; the specific name is the combination of the Latin adjective “curvus, a, um” = curved and of the substantive “folium, ii” = leaf, with obvious reference. 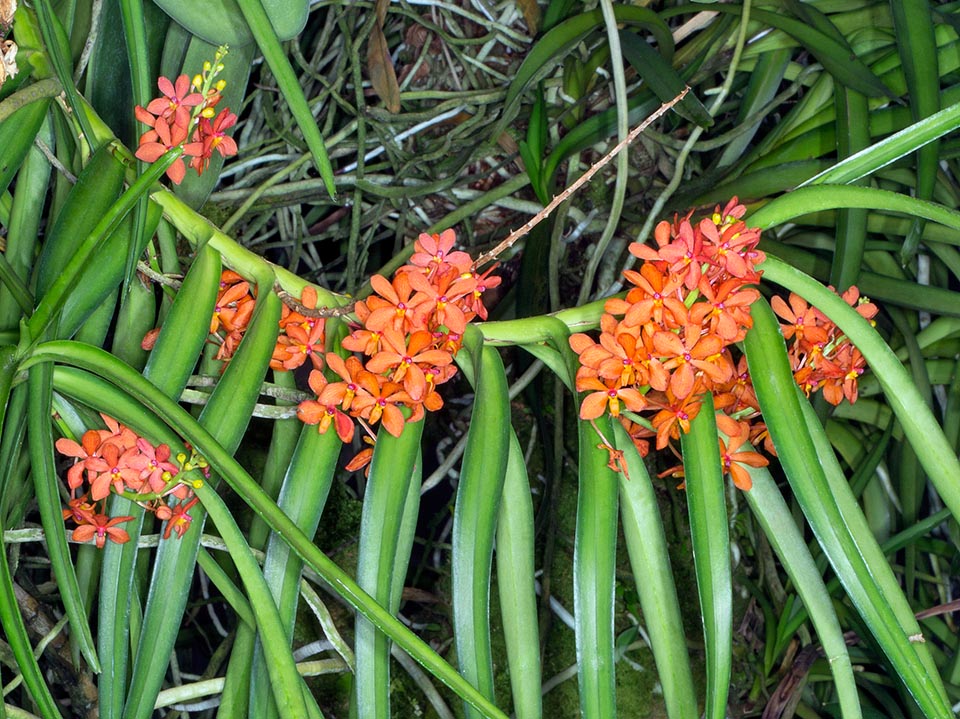 The Vanda curvifolia (Lindl.) L.M.Gardiner (2012) is a monopodial epiphytic specis with usually erect stem, at times ramified, woody, up to about 30 cm long and of 1 cm of diameter, completely hidden by the imbricate foliar bases, from where depart robust aerial roots. The leaves are alternate, distichous, arcuate downwards, linear with obliquely truncated and toothed (praemorsus) apex or bidentate, coriaceous, of pale green colour dotted of purple along the margins, 10-30 cm long and 1-1,5 cm broad. 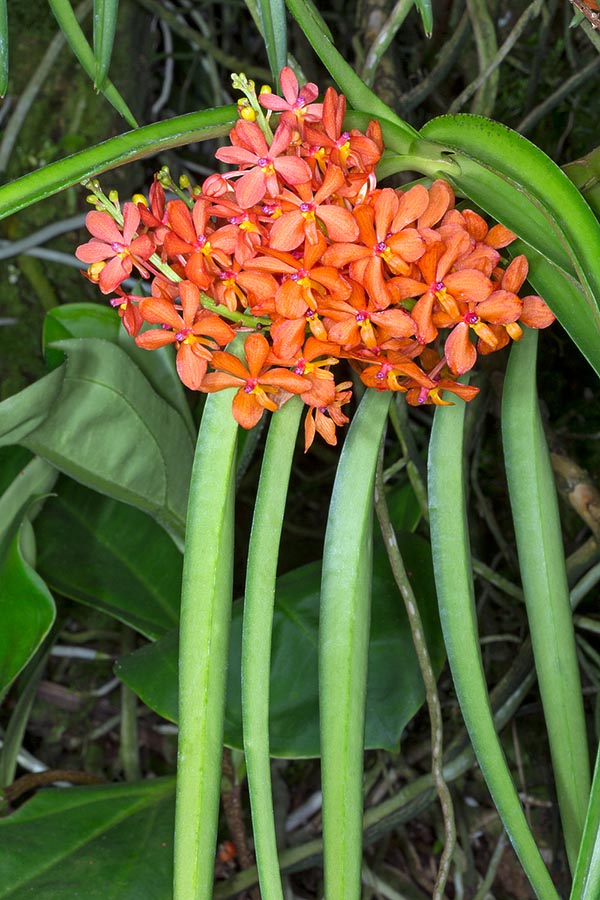 It reproduces by seed, in vitro, and micropropagation. At amateur level it may reproduce by division, in the case of tufted plants, or by dividing the stem in two portions provided each of a sufficient number of leaves and roots, the upper part is to be treated as an adult plant, the lower one, placed in an environment with high temperature and humidity, will produce from the dormant buds one or more plants that may be removed as soon as they will have formed their own rooting apparatus.

Very floriferous species with small flower, but united in dense inflorescences, of intense and bright colour, particularly appreciated by the collectors, for a long time known with the name of Ascocentrum curvifolium, placed on 2012 in the genus Vanda after genetic studies, that had originated countless hybrids, among them the most known are the Ascocenda, from Ascocentrum Vanda.

It requires a very luminous position, even some hours of direct sun in the morning, and well aerated, medium-high temperatures, with lowest ones not under the 16 °C, and high humidity, 75-80 %. The waterings must be frequent and abundant during the growth phase, possibly limiting to the only nebulizations in presence of temperatures averagely low, utilizing rain water, demineralized or by reverse osmosis. Frequent fertilizations in spring-summer, at low dosage, with hydrosoluble balanced products specific for orchids, more reduced in autumn-winter.

It can be mounted on trunks or rafts or cultivated in fenestrated clay pots or suspended baskets without any substratum or with a compost formed by fragments of bark and charcoal in large pieces in order to allow a good aeration of the roots. The repottings are to be done when strictly necessary, at the vegetative restart, trying to damage the least possible the roots that are to be previously soaked to render them more flexible; after the repotting to wait some days before resuming the usual regime of the waterings.