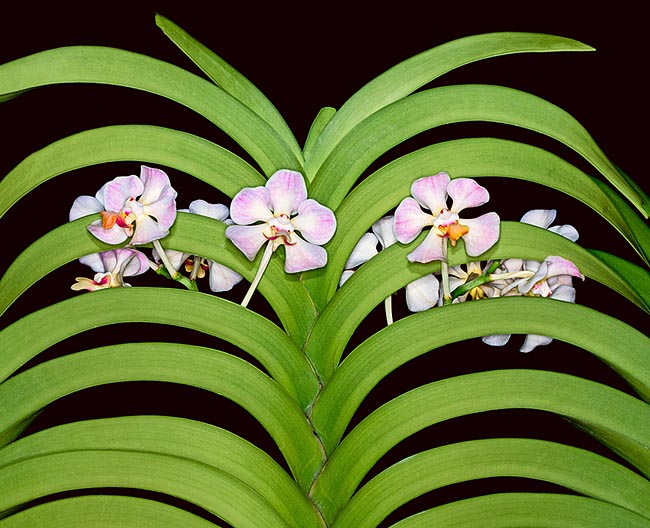 Much decorative, Vanda foetida is an even 1 m tall epiphyte native to Sumatra © Giuseppe Mazza

The species is native to Sumatra where it lives in the humid forests in the southern part of the island.

The name of the genus is that in Sanskrit of the Vanda tessellata; the name of the species is the Latin adjective “foetidus, a, um” = fetid, stinking, with reference to the smell of creosote emitted by the flowers.

The Vanda foetida J.J.Sm. (1906) is a monopodial epiphytic species with erect stem, up to 0,88-1 m tall and of 1,2 cm of diametre, entirely covered by the imbricate foliar bases, from which depart robust fleshy aerial roots. 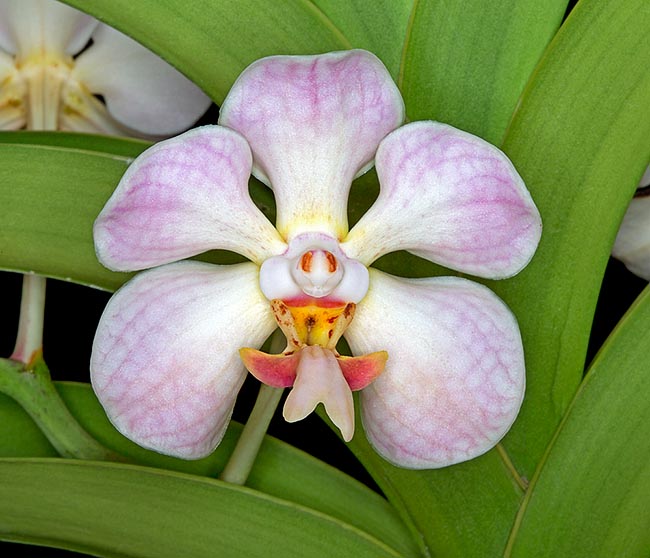 Species of great ornamental value in spite of the smell, actually not pleasant, emitted by its flowers, requires a very luminous exposition, even some hours of direct sun in the morning, high temperatures in summer, 25-32 °C, sllightly cooler in winter, with lowest night values not under the 15 °C, high humidity, 70-85%, and air constantly in slight movement.

Daily abundant waterings and nebuli- zation of the roots in summer, in particular for the plants with bare root, but without stagnations, more spaced in winter, using rainwater, demineralized or by reverse osmosis at ambient temperature.

Biweekly fertilizations from late spring to early autumn, then monthly, utilizing a balanced product, with microelements, specific for orchids, at ½ - ¼ of the dosage suggested on the package.

It can be mounted on branches, bark, rafts of cork or of arborescent ferns or cultivated in pots provided of excellent draining, with compost that can be formed by medium-large sliced bark fragments and charcoal, or preferably in baskets, in order to allow the roots to freely grow, even without any substratum. The repottings are to be done when strictly necessary, due to the delicacy of the roots, by the time of the vegetative restart.