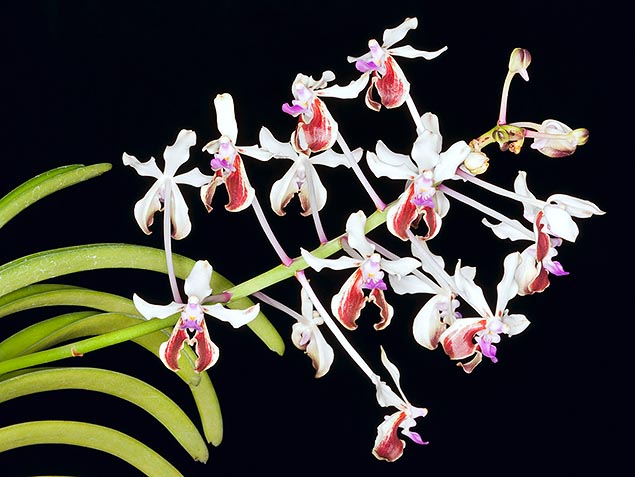 The species is native to Borneo, Mariana Islands, Philippines, Ryukyu Islands and Taiwan, where it grows in the forests at low altitudes preferably along the coasts and the water streams in zones characterized by monsoonal climate.

The name of the genus is the Sanskrit one of the Vanda tessellata ; the name of the species is the Latin adjective “lamellatus, a, um” from “lamella”, small lamina, lamella, therefore, equipped with lamellae, with reference to the two reliefs present on the labellum.

The Vanda lamellata Lindl. (1838) is a monopodial epiphytic species with shirt stem enclosed by the imbricate foliar leaves, robust roots and several alternate, nastriform leaves, distichous, coriaceous, curved, 15-30 cm long and 1,2-1,8 cm broad. Axillar inflorescences usually racemose, 20-30 cm long, more or less erect, carrying numerous waxy flowers of 2,5-3,5 cm of diameter, rather variable as per colour and shape, usually they are of pale yellow colour dappled of reddish brown, but the white lateral lobes of the labellum; the flowers are long-lasting, 4-6 weeks, and emit a slight scent. Oblong dorsal sepal, about 1,8 cm long and 0,8 cm broad, falcate lateral sepals, about 1,8 cm long and 1,2 cm broad, spatulate petals, 1,8 cm long and 0,8 cm broad, trilobed labellum 1,4 cm long and 0,8 cm broad, with erect lateral lobes and oblong median lobe with retuse apex (rounded apex with a slight notch) run by two longitudinal reliefs, from which comes the name of the species. It reproduces by seed, in vitro and by micropropagation.

The Vanda lamellata var. boxallii Rchb.f. (1880) native to Luzon Island (Philippines), honoured to its discoverer, the English orchids collector William Boxall (1844-1910) differs from the species for having longer and narrower leaves, about 1 cm, slightly bigger flowers, up to about 5 cm of diameter, with white or cream background colour, the inner half of the lateral sepals of brown colour and labellum with purple pink median lobo (see photo). 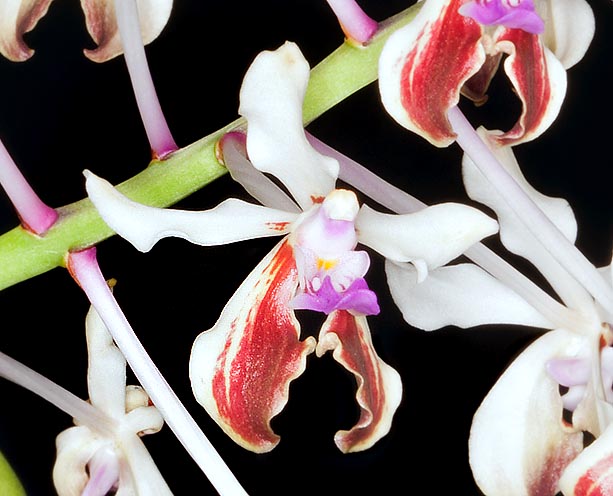 This variety, for its characteristics, is more frequently cultivated and utilized in the hybridizations than the species.

Species and variety have the same exigencies of cultivation, medium-high temperatures with winter lowest values over the 14 °C, high luminosity, also with some hours of direct sun, and constant humidity, 60-80%, with air in constant movement. During the growing time, the waterings must be regular and abundant, slightly spaced when in vegetative stasis for allowing a short resting time.

For the waterings and the nebulisations, rain water is to be utilized, or water obtained by reverse osmosis, or demineralised.

The fertilizations, duly distributed and alternated, in way to avoid salts accumulation at the roots, are to be done during the vegetative period preferably with hydro-soluble balanced products, with microelements, at half dosage than what suggested on the package.

It can be mounted on trunks, bark, cork raft, or cultivated in pot or, preferably, in suspended baskets with bare root or, at most, with large sized bark and charcoal fragments, in order to allow the roots to freely extend and to dry up quickly after the waterings. Transplants and repottings are to be done, when strictly necessary, by the vegetative restart, which is indicated by the appearance of the new roots.