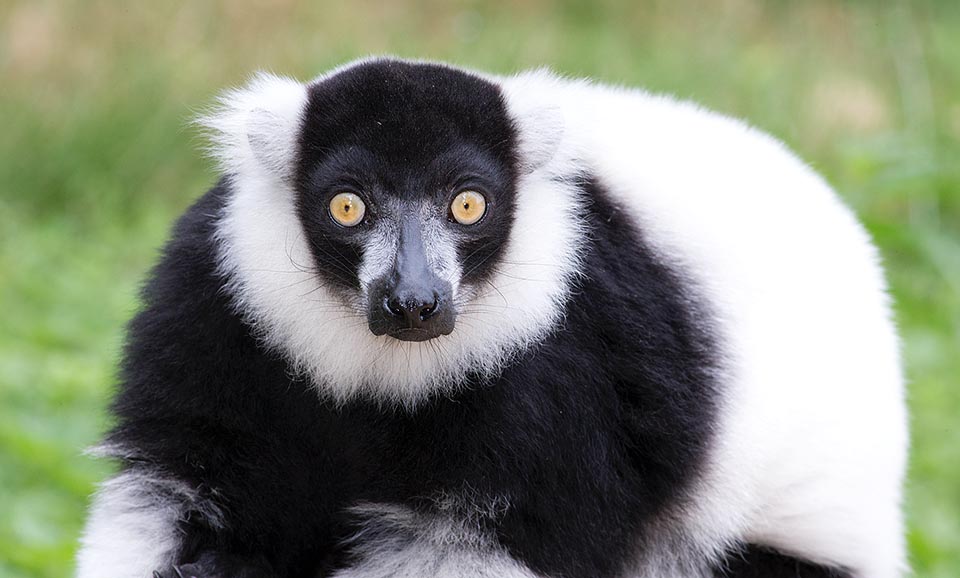 Varecia variegata is a lemur living, with three subspecies, in the forests along the east coast of Madagascar up to 1350 m of altitude. The typical thick black
and white fur shows at least 5 type of colour combinations, with the white predominating progressively in the southern populations © Giuseppe Mazza

Il The Black-and-white ruffed lemur or Variegated lemur (Varecia variegata Kerr, 1972) is a strepsirrhine monkey, belonging to the family Lemuridae, subfamily Lemurinae (including the genera Lemur, that is the lemurs having a ringed tail, Eulemur, the so-called brown lemurs, and, rightly, Varecia, to which belong the so-called ruffed lemurs). 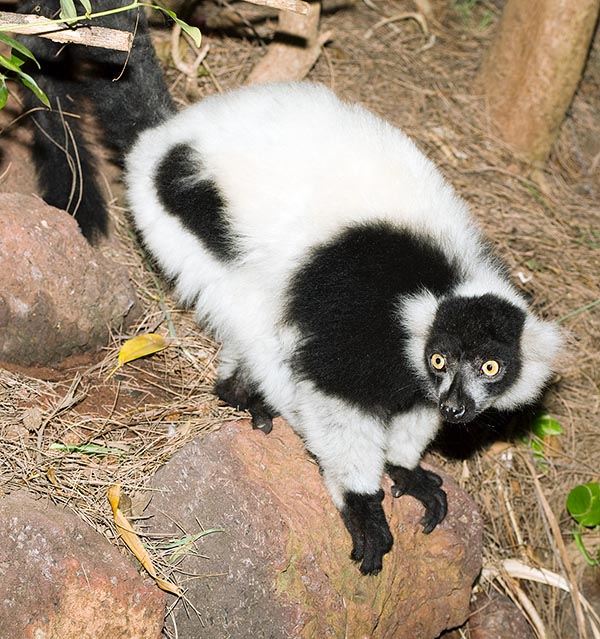 Unlike many lemur, they are very active animals especially in the morning and by late afternoon © G. Mazza

The name of the genus Varecia to which belongs the Black-and-white ruffed lemur should come from the name under which the local populations do call these lemurs, that is “varijatsy”, whilst the specific name comes from the Latin “variegatus” = variegated, to indicate the “optical” (black-and-white) colouration of its pelage.

The Strepsirrhines (Strepsirrhini) are a suborder of Primates and distinguish from the Haplorrhines (Haplorrhini) due to the shape of the nose, characteristic from which comes the name of both suborders.

In fact, in the Strepsirrhines the nose is united by a band of connective tissue to the upper lip, in its turn fixed to the gums, thing absent in the Haplorrhines, conferring these last a much more complex facial expressiveness. Conversely, they are unable to produce autonomously the vitamin C enzymatically, thing that happens in the Strepsirrhines.

Moreover, the Haplorrhines have, almost all, diurnal habits, whilst the Strepsirrhines are mainly nocturnal; for this purpose these last have developped a “tapetum lucidum” on the rear side of the eye, that is a reflecting layer placed behind the retina, in order to better capture the dim nocturnal light. The Strepsirrhines include the lemurs, the lorisoids and the galagos; most of the species are endemic to Madagascar, but they are present also in continental Africa and in South-East Asia (galagos and lorisoids). 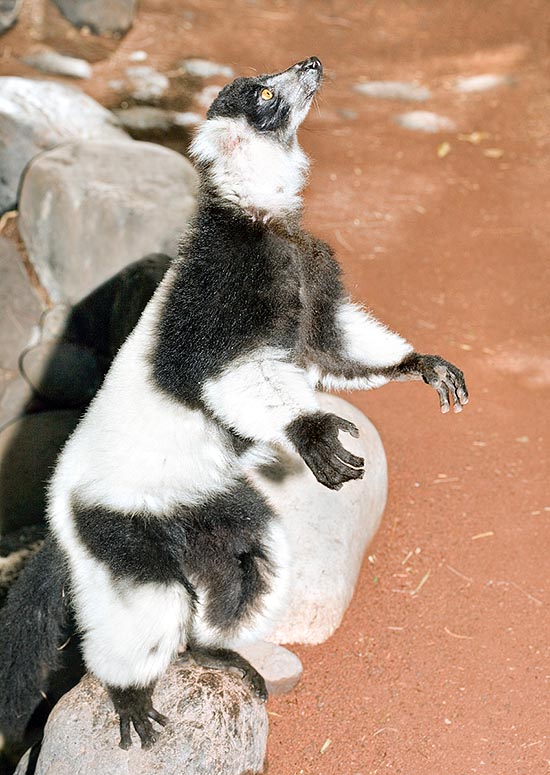 Menaced by raptor and mangooses, not to forget man, they are always watchful and when a lookout sniffs danger emits a deafening alarm cry © Giuseppe Mazza

A further characteristic that unites the Strepsirrhines is the presence of a toothcomb, a structure coming from the fusion of 4 incisors and 2 canines, elongated and pointing forward, that is utilized for the grooming and for collecting the trees resin they nourish of.

For what concerns the Black-and-white ruffed lemur, this one lives in the primary and secondary plain and altitude rainforests, up to 1350 metres, of eastern coast of Madagascar. Three subspecies are known: Varecia variegata subcincta (A. Smith, 1833 that is the one with the northernmost range, and present in an area north to the river Antainambalana (present in north-eastern zone of Madagascar); Varecia variegata variegata (Kerr, 1792), that occupies an area south to this river and finally Varecia variegata editorum (Osman Hill, 1953), the southernmost species, living in an area going from the Mantadia National Park up to the Manombo Reserve.

The once considered as a subspecies (Varecia variegata rubra) has been acknowledged as an independent species (Varecia rubra É. Geoffroy, 1812) in 2001, and is the only other species belonging to the genus Varecia along with the Black-and-white ruffed lemur.

Among the lemurs, the Black-and-white ruffed lemurs are those having the most arboreal habits. They spend much of their time resting among the branches of the trees, in the forest canopy.

The rest of the day is employed for eating and for moving. These movements take place by land or by jumping from a tree to another, displaying a great skill in performing long leaps with extreme precision.

Unlike many lemurs, the Black- and-white ruffed lemur displays diurnal habits, being particularly active especially in the morning and in late afternoon.

Varecia variegata is the most frugivorous among all lemurs, but its diet includes also leaves, seeds, nuts and nectar, depending on the season. 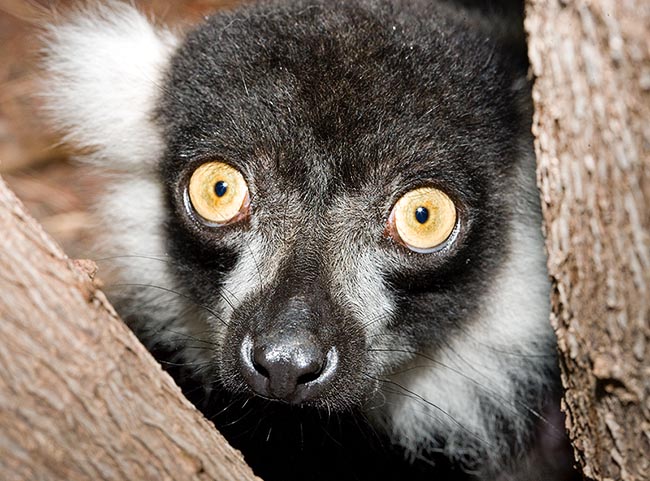 Particular attention deserves its nectarivorous attitude: with its pointed snout and its long tongue it is able to reach the flowers deeply and rightly due to this predilection for the nectar has meant that it developped a strict relation with the Traveller’s tree, the Ravenala madagascariensis, a herbaceous plant endemic to Madagascar. The Black-and-white ruffed lemur is able to reach its white flowers protected by large bracts and to nourish of the nectar, filling its nose with pollen and becoming in all respects a very important pollinator for the concerned vegetal species.

This characteristic has rightly granted him the title of biggest pollinator in the world !

It is deemed to be one of the most beautiful species of the Lemuridae species; this reputation comes to him due to its thick and morbid fur, varying of colouration and of shades in the pattern. 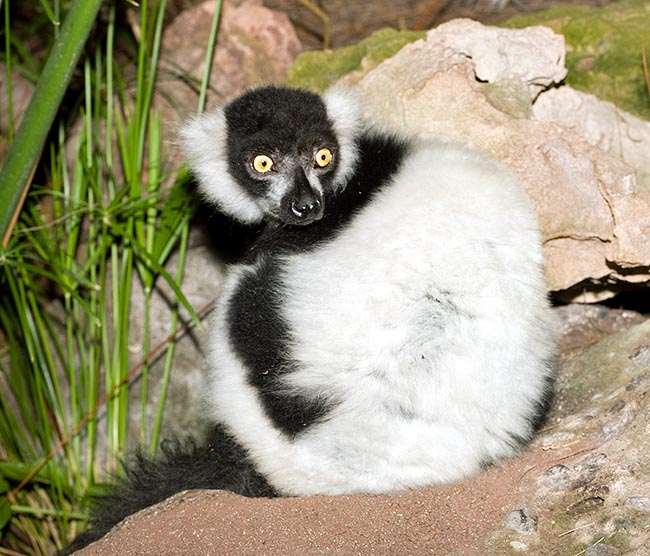 With 50-60 cm of length plus as many of tail, it’s a giant among lemurs, that may reach the 4,5 kg of weight in females. It eats, after the seasons, fruits, seeds, leaves, buds, resin and nectar © Giuseppe Mazza

Though being typically bicoloured, at least 5 different patterns have been observed, with which white and black do combine.

However, a trend can be outlined: in the northern area of its home range, it has a mainly black fur, whilst the white prevails in the southernmost popula- tions.

The face and the upper part of the head are usually black, in clear contrast to the big and quite lively yellow eyes and with a white collar that surrounds the face. Also hands, feet and tail are black.

Contrary to the species belonging to the genera Lemur and Eulemur, that have only two of them, the Black-and-white ruffed lemurs are equipped with three pairs of teats.

The reproductive system of the Black-and-white ruffed lemur is not well known: the studies performed in captivity as well as in nature have highlighted a huge variety in the social organization of the species, that may live in couple or in great groups.

It seems, in fact, that it lives often in those that would appear to be familiarly groups as an average formed by 2-5 individuals, that is a reproductive couple and their possible progeny. These observations might lead to assume a monogamous reproductive system. 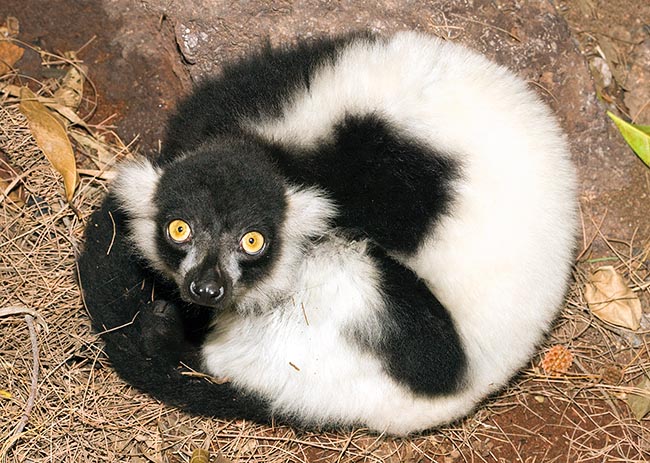 Sometimes they rest on the ground, but more often on the trees, where before delivering the future mothers look for a well protected cavity and tear off own hair, creating with the leaves a stuffed comfortable nest for the young © Giuseppe Mazza

However, in some areas of Madagascar, have been observed groups up to 16 individuals, and this would not rule out the possibility that the species can display also polygamy. We have to point out, however, that these bigger groups divide in several under groups when the humid cold season arrives.

The couplings usually take place between May and July, the gestation appears to be quite short in respect to other species of lemurs: it lasts from 90 to 120 days only, and may originate a fairly numerous progeny, even up to 6 newborns. Usually however, 2-3 of them are generated at a time. Half of deliveries are, in fact, twins.

Weaning occurs around the 4 months of life, whilst the adult dimensions are reached when about 6 months old. The sexual development in the females is very fast: before the two years of life they are already able to conceive, even if usually, the first pregnancy does not occur before the 3-4 years.

The mothers display a quite particular behavior: shortly before delivery they tear off hairs from the sides and with this soft and warm down, along with leaves and twigs, “fill” some trees cavities, at heights comprised between 10 and 20 metres from the ground, for building nests suitable to host the arriving kids. 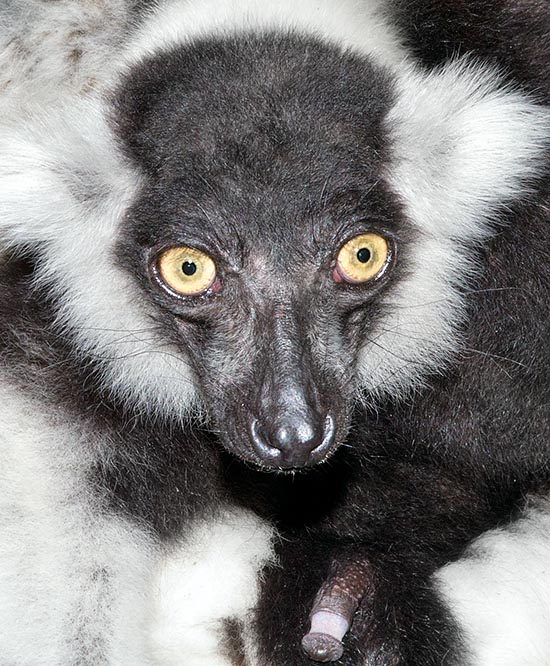 Males are smaller and less pugnacious. In their society it’s a female who commands © G. Mazza

Also the way with which the mothers carry the kids is particular: it is known how, in many species of lemurs and primates in general, the young do cling firmly on the belly of the mother for being transported, and then move, when bigger, to the back. Well, in the Varecia variegata the mother uses the mouth for carrying the kids, who usually leave the nest after 3 weeks of life, acquiring full capacity of movement by around the 7 weeks of life.

The males have a role in looking after the progeny especially in the small groups, where the security of paternity is high. In bigger groups, the possibility that a female couples with more than one male increases considerably: this tends to reduce the level of care reserved to the offspring by the males.

When they feel menaced, the various Black-and-white ruffed lemurs defend their territory emitting an almost deafening alarm call and the female are clearly more active in the defense of a group than the males.

Like all primates, they display a sophisticated of intraspecific system of communication based, besides the vocalizations, also on particular postures and facial expressions. “Grooming”, moments of play and aggression form most of the tactile communication that takes place inside the species. Males as well females, furthermore, release fragrant substances to mark the territory.

Undoubtedly, it must be emphasized another particularity of this funny lemur: it shows a rare phenomenon of female dominance inside the social groups. The aggressive interactions between males and females are usually won by the females, who prove to be able to establish their dominancy over the male for what the food is concerned, having usually access to the same the first. This behavior is justified in the fact that the females often deal alone with the progeny and therefore need many energies not only during the pregnancy, but also and especially after the birth of the babies for transporting and caring them. 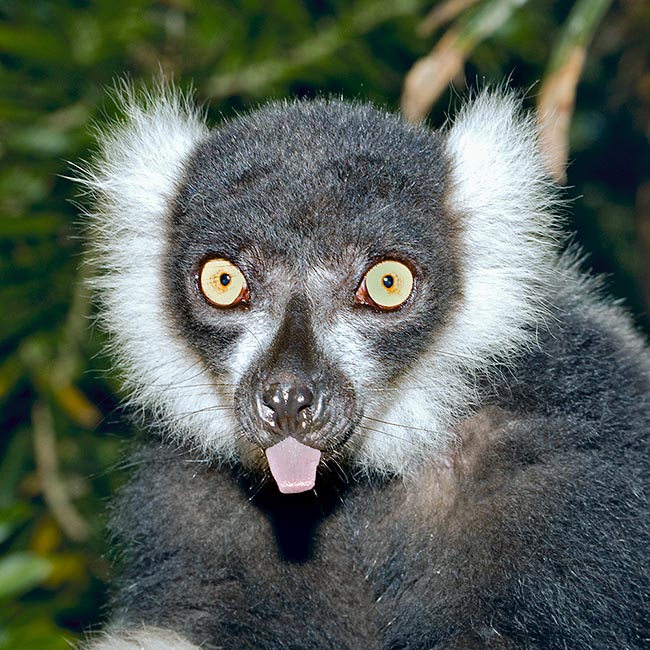 Is it a rude Vareciaiensis, protégées par de gran wanting to imitate Einstein? No, it reminds us that it’s the biggest pollinator in the world. Thanks to its pointed snout and the long tongue, in fact it can reach in depth the Ravenala madascariensis flowers, protected by big bracts, to drink the sweet nectar and thus transporting its pollen © Giuseppe Mazza

It is also true that the dominancy is never established by the youngest females of the group and therefore, in case of absence of an adult female, the group usually keeps without a dominant figure. When this is present, it leads it to the source of food and eats more than the other members.

The Black-and-white ruffed lemurs live as an average 19 years in the wild, but may reach even the 30 when captive. After IUCN, the Black-and-white ruffed lemur is classified as “critically endangered” (all three subspecies), therefore as a species under high risk of extinction, especially due to the destruction of its habitat, due to the cultivations, mining and the develop- ment of other productive activities, but also due to the hunting of which is victim, for the meat as well as for the fur. Its size and its diurnal habits render it a particularly “easy” target to locate. Last but not least, it is involved in a profitable trade as company animal (pet trade).

Among its predators we can count the Henst’s goshawk (Accipiter henstii), the Fossa (Cryptoprocta ferox), the Ring-tailed mongoose (Galidia elegans) and the Brown-tailed mongoose (Salanoia concolor). The predation rate borned by the species looks high, especially due to its “nidification” behaviour in the trees cavities.