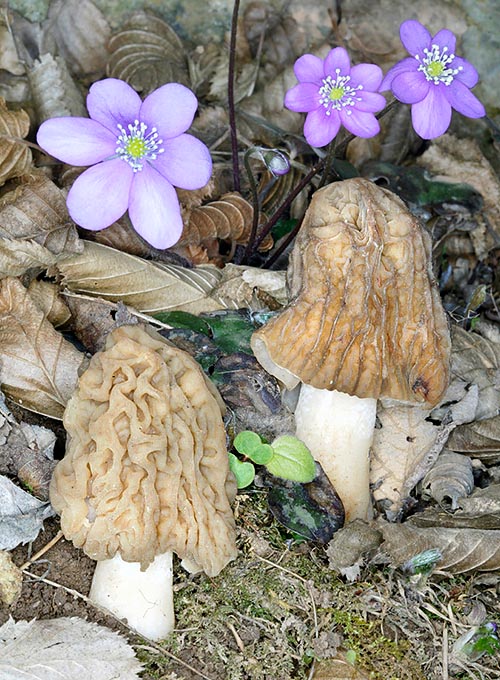 The etymology of the epithet comes from the Latin, “bohémicus” = of Bohemia, region of Central Europe.

It is a species known all over Europe and America; in some zones (in Italy), it is very appreciated, sought for and, locally, even commercialized.

In Italy it is colloquially called “spugnola” like the species of the genus Morchella; in France, “Verpe de Bohême”; in Spain, “Falsa cagarria”, “Falsa colmenilla”; in Germany, “Runzel-Verpel”, “Böhmische Verpel”; in UK, “Early false morel”.

To the genus Verpa are ascribed species presenting an ovoid apothecium, campanulate, digitaliform, with wrinkled or more or less alveolate surface, with edge completely free from the stipe. The hymenophore, placed on the outer part of the apothecium, is of brown colour, with honey-coloured hues. The stipe is sub-cylindraceous, rough, zebra striped at times, hollow, and frail. The spores are smooth, ellipsoidal, hyaline, and develop in 8-spored or 2-spored asci. They are all terricolous species, usually growing in deciduous forests in spring.

Cap: it is formed by a 3 to 5 cm tall apothecium, formed by labyrinthiform or also brain-like ribs, more or less irregular, similar to a Morchella, at times even so much dissimilar to resemble to a Gyromitra, united to the stipe only in the apical part, conical or flattened, edge free from the stipe, the lower surface is slightly rough and whitish. The colour goes from ochre to brown-pink, up to dark brown, with darker ribs in the mature fungus.

Hymenium: placed in the outer surface of the apothecium, smooth, with irregular ribs brown, dark brown; the spore print is cream.

Stipe: 7-15 x 1,5-3 cm, whitish or white-ochraceous, finely velvety, in the young fungus stuffed, but soon becoming hollow, yielding to the pressure, usually slender and enlarged at the base. 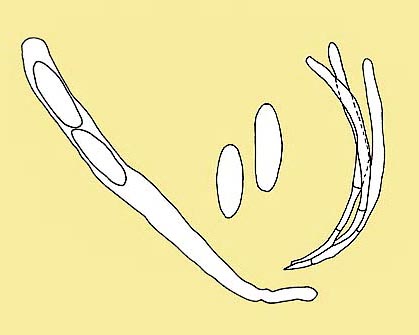 Flesh: typically waxy, as all the species of the Family, elastic but fracturing neatly, whitish, with ochre or tawny shades at the base of the stipe; unpleasant smell and taste, not particular, similar to that of the Morchella.

Habitat: it’s a spring fungus, growing preferably in the open spaces of broadleaf trees, poplars, on soil fresh and rich of humus, sandy, in riparian meadows, among the bushes and in the city parks and gardens, isolated as well as gregarious; saprotrophic species; recent studies appear to show that it may be a mycorrhizal species.

Edibility: edible after long cooking, of lesser value than the Morchella, even if in some zones it is much consumed. Many cases of allergies are reported, sometimes giving coma.

Remarks. This is a species which, due to its shape, might be mistaken with a Morchella or with a Gyromitra, but the longitudinal section will remove any doubt, in fact, it will emphasize the insertion of the apothecium to the apex of the stipe, typical of the genus Verpa. In the Morchella the apothecium and the stipe are contiguous, with or without a small depression (vallecula), all the carpophore is hollow. The Gyromitra do have medium-large sized carpophores, with irregular apothecium, brain-like, saddle-shaped, of reddish brown, brown or amber brown colour; the stipe, short, stocky, smooth, sulcate, hollow, but also with ribs and irregular intersections.

Verpa bohemica was last modified: May 19th, 2020 by Giuseppe Mazza