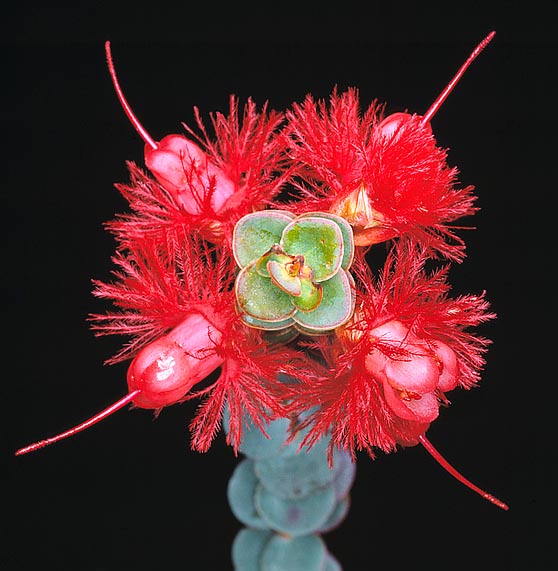 This species is native to Western Australia, where it lives in prevailingly sandy soils in zones characterized by sclerophyll vegetation and by a climate of type Mediterranean, with humid and mild winters and warm and dry summers; where the fires contributing to the renewal of the vegetation are frequent.

The Latin name of the genus, “verticordia” = which turns the hearts, was one of the epithets of Venus; the name of the species is the Latin term “grandis” = large, with reference to the size of the flowers.

The Verticordia grandis J.Drumm. (1853) is a woody evergreen shrub, 0,5-3 m tall, usually little ramified, with red branches in the younger part, opposite sessile leaves with the base partially wrapping the stem, roundish, of about 1,5 cm of diameter, of green grey colour, aromatic due to the presence of oleiferous glands.

The axillary hermaphrodite flowers are concentrated in the terminal part of the branches, are of 2-2,5 cm of diameter, with the about 1 cm long sepals, fringed, of bright scarlet red colour, and five petals of the same colour, 1-1,5 cm long, partially united at the base so to form a sort of tube; the long red style juts out from the centre.

The fruit is an indehiscent (which does not open when ripe) capsule, containing one seed only.

It reproduces by seed, which germinates in long times, even more than one year, and rather painfully by woody cutting; the grafting on other Myrtaceae, such as the Camelaucium uncinatum, for a major adaptability to different types of soil, has already proved positive. In order to meet the growing demand, the micropropagation of plants genetically modified, more resistant to the diseases and to the cultivation conditions, is increasingly used.

This species is considered as the most ornamental of the genus, for the foliage as well as for the lively flowering, but, unluckily, it is not of easy cultivation and reproduction; it requires a climate of Mediterranean type, with long warm and dry summers, and mild winter temperatures which only exceptionally may reach values just below the 0 °C; it does not stand humid climates and water stagnations.

Basic requirements for its cultivation, even in Mediterranean climate, are a perfectly draining soil, also poor and possibly sandy, in preference acidic or neutral, and a full sun exposition.

It requires regular watering in summer only during the first year of planting, much less frequent or completely absent in the following years; drastic prunings, up to the base, are useful in order to render more compact the vegetation and to stimulate a greater flowering, which happens on the new vegetation, in nature, the fires have the same effect, destroying the aerial part which regenerates thanks to the particular resistance of the woody base.

Very much appreciated for the floral compositions are the cut flowers, of which there is an increasing demand, fresh, which last little more than a week, and, mostly, dry, which are long lasting.

Verticordia grandis was last modified: May 6th, 2018 by Giuseppe Mazza