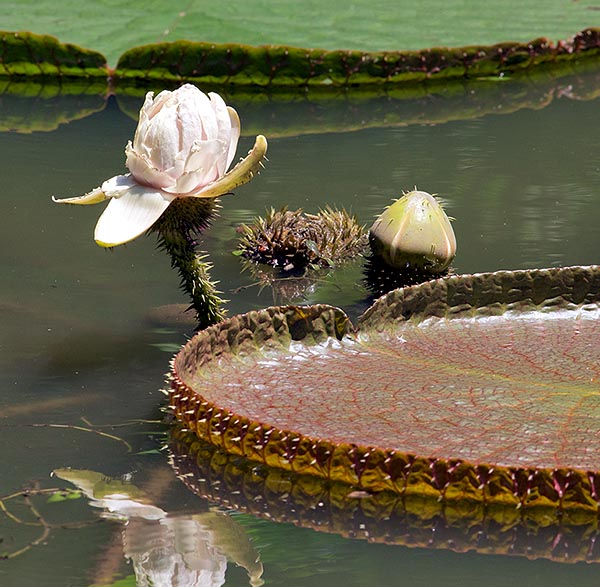 The Victoria cruziana is native to Argentina, Bolivia and Paraguay where lives in shallow and slow waters © Giuseppe Mazza

The species is native to Argentina, Bolivia and Paraguay where it lives at the margins of the Parana and Paraguay rivers in shallow and slow waters.

The genus is honoured to the Queen Victoria (1819-1901) of United Kingdom; the species to Peru and Bolivia President, Andrés de Santa Cruz Villavicencio y Calaumana (1792-1865), sponsor of the expedition in Bolivia during which was collected the first sample of the species.

The Victoria cruziana A.D. Orb. (1840) is a rhizomatous herbaceous freshwater plant, perenial with short life, with rhizome rooted into the bottom sediment.

It has almost circular floating leaves, up to 2 m of diameter, of pale green colour, water repellent and unarmed above, of purple colour and equipped with robust spines below, with the margins raised at right angle, up to 20 cm of height, but two opposite openings for the outflow of the water. The leaves are peltate (with the petiole inserted almost at the centre of the lamina) and connected to the rhizome by a long petiole, flexible and spiny, run by canals where air is present for ensuring the floatiness and the gassy exchanges between leaves and roots. From the point of insertion of the petiole with the lamina radiates a net of robust and prominent veins run by canals full of air that help in its floatiness and in maintaining it flat and rigid and capable to support the weight of some tens of kilos, if evenly distributed.

Solitary flowers of 18-30 cm of diameter, floating, on a robust spiny peduncle also provided of canals where air is present, with 4 green sepals spiny at the base, unarmed or almost towards the apex, and more than 50 petals. The flowers, nocturnal, last two days, open at dusk of the first day with the petals of uniform white cream colour and close in the first hours of the following day, open again the evening, with the petals that have become pale pink, to close definitively, the following morning, and start to plunge towards the bottom where the maturation of the fruit will continue that will resurface, when perfectly ripe, after about 6 weeks.

The pollination process is the same as that of the Victoria amazonica, the flowers are hermaphroditic, but proterogynous, the stigma, the female part of the flower, is receptive the first night, whilst the pollen is released the second night, phenomenon that prevents the self-pollination favouring the crossed one. The pollination is done by scarabaeids belonging to the genus Cyclocephala Dejean, 1821, mainly Cyclocephala castanea Olivier, 1789, that by dusk, when the flower opens, are attracted by the white colour of the flowers, by the high inner temperature, about 10 °C more than the ambient one, and by the intense scent, that to many reminds that of the pineapple, that such increase of temperature enhances and renders it noticeable at a distance of several metres. 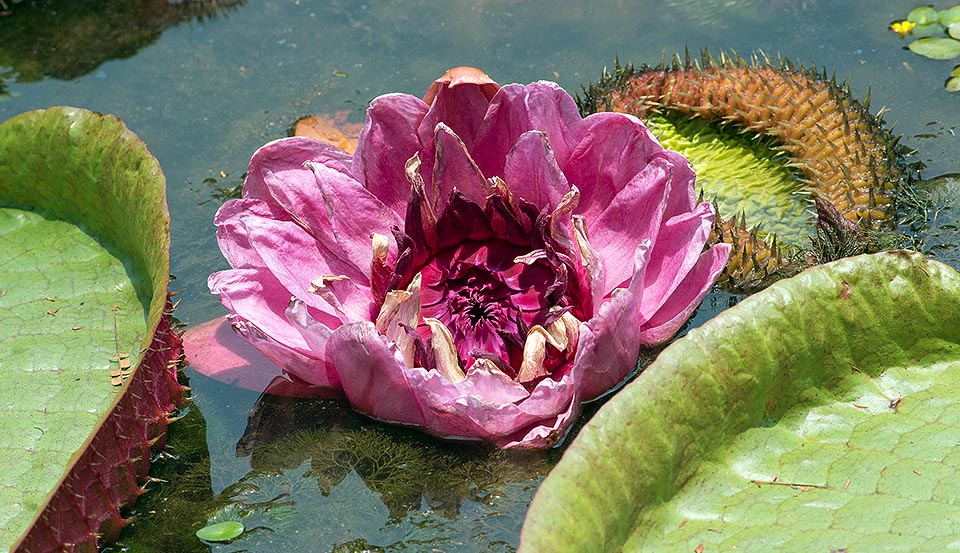 An interesting hybrid of Victoria cruziana x Victoria amazonica. The flower, clearly red, is at the and of the second day of life © Giuseppe Mazza

The abundant presence of starch in the staminodes induces the insect to “feast” inside the flower remaining imprisoned there until the following evening, when it opens again with the stigma no more receptive, the petals become pink and the pollen, ripe, released. The insect, now free and covered by pollen, no more attracted by the colour of the petals and by the temperature back to normality, can fly away and go to pollinate a flower at the first day of opening that has just stretched its attractive white petals and has the stigma receptive.

The fruits are globose, of 10-15 cm of diameter, spiny, containing several almost spherical seeds, of about 1 cm of diameter, covered by a spongy aril with cavities full of air that allow their floating and facilitate their dispersion through the currents till when it dissolves letting them to deposit on the bottom.
It reproduces by seed, that, for not losing the germinability, is to be stored constantly humid, or immersed in distilled water, at a temperature of 13-15 °C to inhibit the germination. At the time of planting the seed is scarified and put in clayey loam rich of organic substance under a thickness of water of 5-10 cm at a temperature between 22 and 24 °C; after the germination the young plants are to be placed progressively in bigger containers until the final planting; the first blooming takes place after about 7 months.

Even if perennial and more tolerant about the temperature than the Victoria amazonica, being able to grow in waters with temperatures of 18-20 °C, it is usually cultivated as annual, sowing early winter, with the aforementioned procedures, and then to be placed by the beginning of summer in large pools, 1-2 m deep, preferably in full sun and with abundant weekly fertilizations, where it represents one of the main attraction spots of parks and botanic gardens.