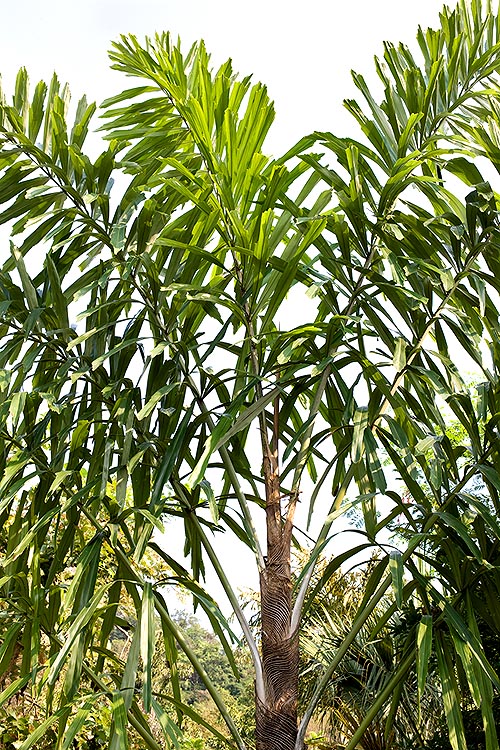 This plant is native to Assam, Bangladesh, central-southern China, eastern Himalaya, Laos, Myanmar and Thailand, where it grows in the humid forests between the 600 and 1500 m of altitude, often on rocky and steep slopes.

The genus is honoured to the Danish botanist Nathaniel Wallich (1786-1854); the name of the species comes from the Greek “distichos” (from “dis” = two and “stichos” = line) = distichos, with reference to the leaves disposed in two rows on opposite sides of the stem.

The Wallichia disticha T. Anderson (1869) is a monoecious plant, monocarpic (bearing fruit only one time during its existence), with solitary stem with slightly elliptic section, up to 10 m tall, with a diameter of 15-25 cm, covered by a mass of blackish fibres produced by the foliar bases.

The pinnate leaves are disposed on the same level on the sides of the stem, fan-like, ascending, up to about 3 m long on a 0,5-1,5 m long petiole. The pinnulae are linear, lance-shaped with the margins slightly lobed and undulated and indented apex, dark green on the upper side, silvery green below, about 60 cm long in the median part and 6-8 cm broad, irregularly disposed in groups of 2-8 along the stem and inserted at different angles, thus giving the leaf a fluffy appearance.

The inflorescences, between the leaves, are unisexual and produce, as soon as the plant has reached the floriferous maturity and proceeding from the top to the bottom; the female ones develop in the terminal part first, are hanging, long about 1 m with about 50 floriferous branches, long up to 60 cm; then, the male flowers follow, they are lateral, pendulous, 1,2 m long, ramified, with even 1000 floriferous branches (rachillae), 30 cm long.

The fruits are ellipsoid, 2 x 1,5 cm, reddish brown. Once completed the ripening, the plant, as said before, will die. It reproduces by seed which germinates in about 4 months. Its growth is relatively rapid in the optimal conditions of cultivation and reaches the floriferous maturity in 10-20 years.

It’s a plant having an odd and unusual look for the palms, but is rarely cultivated, maybe for the difficulty in finding the seeds; in fact, it is extremely difficult that a single plant may produce fruits, seen the particular way of proceeding of the blossoming, as described before. It is cultivable in full sun and in particularly draining soils, in the tropical, subtropical and warm temperate climate zones, as it may resist to exceptional and very short periods with temperatures as low as even -4 °C; it profits of frequent watering in the warmest months and of periodical fertilization.