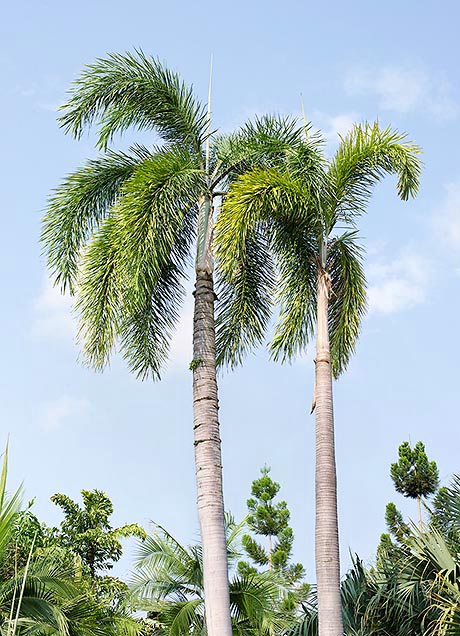 The Wodyetia bifurcata is much cultivated for its fluffy elegance © G. Mazza

This plant is native to Queensland (Australia), where it grows on the open forests on sandy, granitic soils in a restricted zone, Melville Range, of the Cape York Peninsula, up to 400 m of altitude; the climate is characterized by a marked seasonality.

The Wodyetia bifurcata A.K. Irvine (1983) is a monoecious plant with solitary stem, up to 20 m tall with a diameter of 20-25 cm, slightly swollen on the median part, smooth, of pale grey colour, on which are visible the rings trace of the junction of the fallen leaves.

The leaves are pinnate, 2,5-3,2 m long, on a 20-40 cm long petiole, with up to 70 cm long pinnulae in the median part, light green below, subdivided in several parallel segments, even 17 in the central ones, with truncated and toothed apex, and wrapping partially the rachis, which give the leaf a particularly fluffy look; petiole and rachis have the surface covered by grey to brown scales. The foliar base, of green colour with a thin greyish-white tomentum, wraps wholly the stem for a length of 0,8-1,2 m.

The inflorescences come out under the leaves, are horizontal or hanging, much ramified, up to about 1 m long, with cream flowers disposed on the branch (rachilla), in the typical triad (one female flower between two male ones), but at the extremity, where are present only male flowers in pairs or single. The fruits are ovoid, 5-6 cm long, orange-red when ripe, containing one only seed surrounded by a layer of flat blackish coriaceous fibres.

It reproduces by seed which germinates in 2-3 months; the growth is fast if regularly watered and fertilized. It is a plant of a very high ornamental and landscape value, due to the particular appearance of its leaves, as isolated specimen, on group or in rows; plant which, in very few years after its discovery has become one of the most popular and sought for palms, also due to its growing speed and its adaptability to various situations. It may be cultivated, in full sun, in the tropical and subtropical climate zones; its cultivation may be tried also in the warm temperate zones having particularly mild winters, where the adult plants can resist to exceptional and very short lasting decreases of temperatures to -2 °C.

It also grows well in fairly windy zones and is rather resistant to the marine aerosol. It may be, therefore, utilized close to the sea side. It is not particular about the soil, provided the same is perfectly draining, and may bear, like in its origin countries, drought periods, but with a slower growth and a less luxuriant look, unless underground water is available.