An ugly but nice marsupial digger, the wombat is an Australian relative of the Koala. Furry like a bear, its teeth are like a beaver’s and, like a mole, it digs tunnels that can reach hundreds of meters. The pouch opens downwards so that it doesn’t fill with earth. 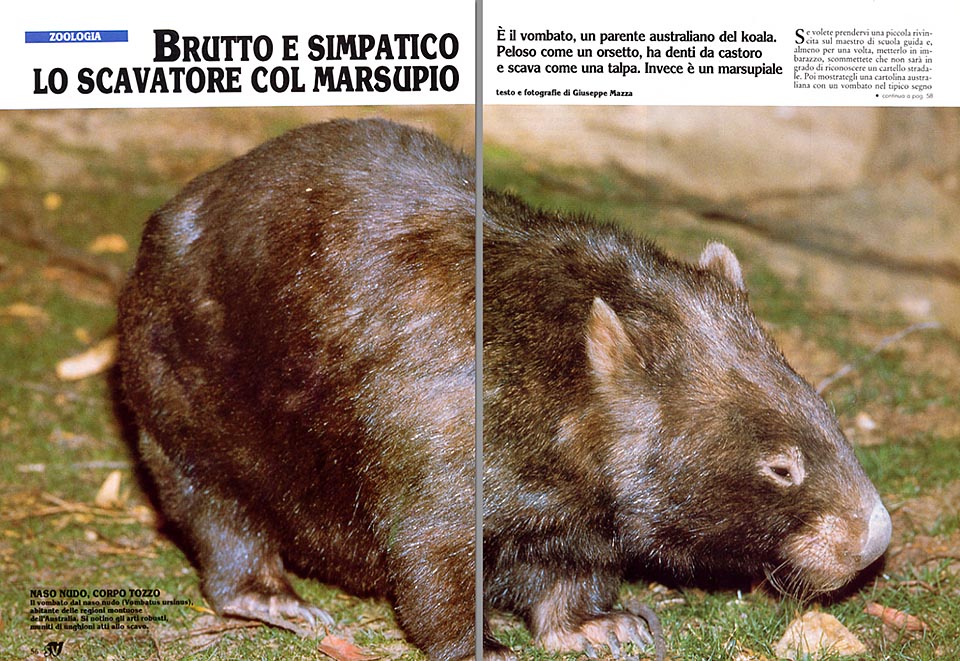 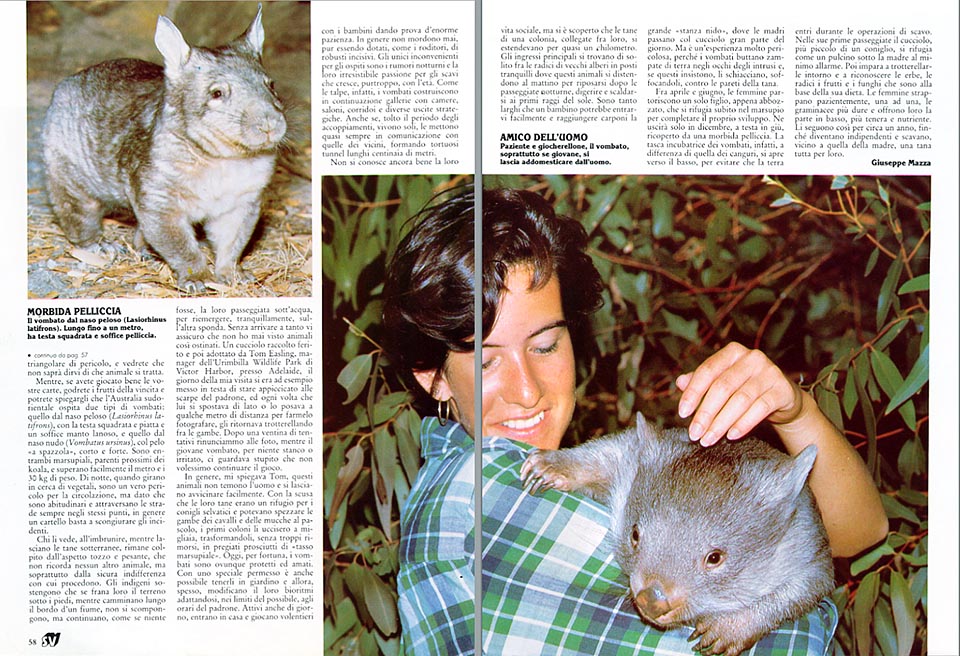 If you wish to get a small revenge with the driving school teacher, and, at least once, embarrass him, bet with him that he will be unable to recognize a certain road sign.

Then show him an Australian postcard with a wombat in the typical triangular signal of danger, and you will see that he will not be able to tell you which animal is concerned.

While, if you have well played your cards, you will enjoy the fruits of your victory, you will be able to explain him that south eastern Australia has two kinds of wombats: the Southern hairy-nosed wombat (Lasiorhinus latifrons), with a squared and flat head and a soft woolly mantle, and the Coarse-haired wombat (Vombatus ursinus), with “brushy” hair, short and strong.

Both are marsupials, next of kin with Koalas, and easily weigh more than 30 kg. During the night, when they are wandering around, looking for vegetables, they are a real danger for the traffic, but, seen that they do not change their habits, and cross the roads always in the same points, a road sign is usually sufficient to avoid accidents.

He who sees them, at dusk, while they leave their underground dens, is impressed by their stumpy and heavy appearance, which does not recalls any other animal, but, especially, by the absolute indifference with which they move.

Natives aver that if the land sinks under their feet, while walking along the bank of a river, they don’t get troubled at all, but they continue, as nothing should be happening, their walk under the water, and emerge, calmly, on the opposite bank. Without affirming this, I can assure you that I have never seen other animals so much stubborn.

A puppy, picked up as wounded, and then adopted by Tom Easling, manager of the Urimbilla Widlife Park of Victor Harbor, close to Adelaide, on the day of my visit, for instance, had decided to remain stuck on the shoes of his master, and every time that he was moving on a side, or was placing it on the ground a few metres far away, in order that I could photograph it, was going back, toddling, between his legs.

After about twenty attempts, we gave up, while the young wombat, absolutely not tired or upset, was looking at us, astonished, because we did not wish to go ahead in the amusement.

“Generally”, Tom explained me, “these animals do not fear man and can be easily approached. With the excuse that their dens were a shelter for the wild rabbits and could break the legs of horses and cows while grazing, the early settlers killed them by thousands, transforming them, without many second thoughts, into precious hams of “marsupial badger”.”

Nowadays, luckily, wombats are everywhere protected and loved. With a special permit it’s also possible to keep them in the garden, and then, often, they modify their biological rhythms, adapting themselves, in the limits of their best, to their master’s timings. Active also during day time, they enter the house and play willingly with children, showing an enormous patience.

Generally, they never bite, even if they hold, like the rodents, strong incisors. The only drawbacks for the hosts are the nocturnal noises and their irresistible passion for digging, passion which unluckily increases with age.

Like the moles, in fact, wombats make continuously tunnels with chambers, halls, corridors and several strategic exits. Even if, apart the mating period, they live alone, they connect their dens with those of the neighbours, thus forming tortuous “tunnels”, long even hundreds of metres. Their social life is not yet well known, but it has been discovered that the dens of a colony, connected between them, extended for almost one kilometre.

Main entrances are normally located under the roots of old trees, in quiet places, where these animals can rest in the morning after their night walks, digest, and warm up under the rays of the sun. They are so wide, that a child could enter them easily, and reach, going on all fours, like Alice in Wonderland, the long “nest chamber”, where mothers spend a big part of the day along with their puppy.

But this is a very dangerous experience, inadvisable, even for a dog, because wombats throw, with their claws, soil towards the eyes of the intruders, and, if these ones insist, they crush them, suffocating them, against the walls of the den.

Between April and June, females deliver only one son, just roughed, which shelters immediately inside the marsupium to complete its development.

It will get out only in December, head down, covered by a soft fur. Wombats incubating pouch, in fact, unlike kangaroos, opens towards the bottom, to avoid that the soil enters during the digging operations.

During its first walks, the puppy, smaller than a rabbit, takes shelter like a chick, under the mother at the least alarm. Later on, he learns how to toddle around the mother, and to recognize the herbs, the roots, the mushrooms and the fruits, which form its diet.

Females tear off, patiently, one by one, the harder poaceae and give them the lower part, which is more tender and nourishing. They care them in this way for about one year, till when they become independent, and dig, close to mother’s one, a den all for themselves.