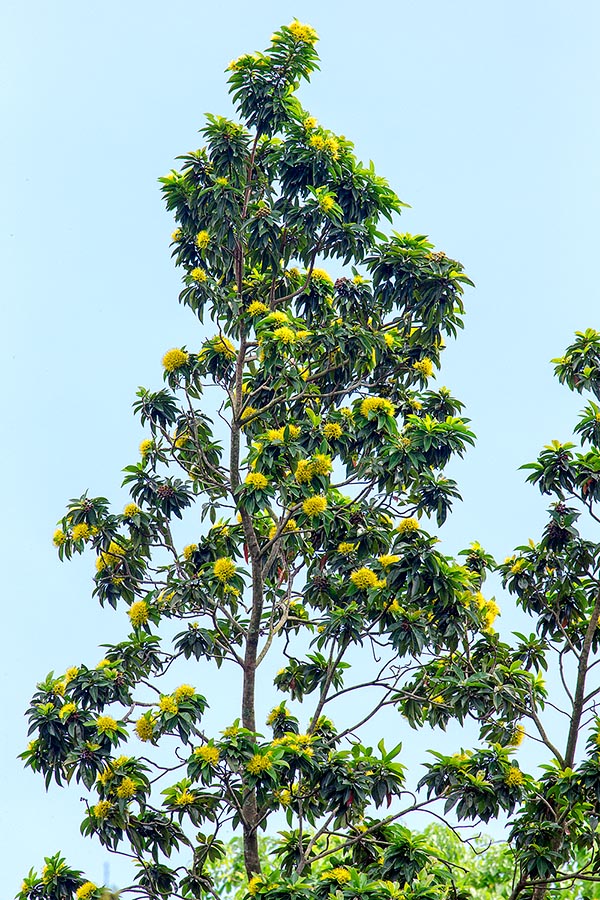 The species is native to Australia (north-eastern Queensland) where it grows in the coastal pluvial forests mainly along the banks of the water streams, from the sea level up to about 600 m of altitude.

The Xanthostemon chrysanthus (F.Muell.) Benth. (1867) is an evergreen tree up to 20 m tall, even if in cultivation it usually maintains lower, 4-6 m. The leaves, on a 0,6-1,2 cm long petiole, grouped at the extremity of the branches, are alternate, simple, elliptic to lanceolate with pointed apex and entire margin, 8-18 cm long and 2-8 cm broad, coriaceous, glossy, reddish when young, then intense green above, paler below. Cymose inflorescences at the axil of the apical leaves, compact, globose up to 15 cm of diameter, carrying several flowers of golden yellow colour with campanulate calyx of about 0,5 cm of length and of diameter, orbicular or triangular petals, about 0,8 cm long, 20-25 stamina, 2,5-3 cm long, and about 4 cm long style; the flowers are rich of nectar that attracts bees and nectarinids. The fruits are sub-globose capsules with persistent calyx, of 1-1,5 cm of diameter, containing numerous flat seeds about 0,4 cm long.

It reproduces by seed in sandy organic loam maintained humid at the temperature of 22-24 °C, with germination times of 1-2 months or more, and first blooming, under the best cultivation conditions, after 2-3 years, and by cutting.

Species of great ornamental and landscaping value, due to the luxuriant foliage and the long bright blooming, which needs few attentions, cultivable in full sun or slight shade in the humid tropical and subtropical zones; its cultivation may be tried in the milder warm temperate climate zones where temperatures around the 0 °C are short-lasting exceptions, but with less abundant blooming. It is not particular about the soil, provided draining, and well rooted can stand drought periods, but grows at the best in the rich ones maintained almost constantly humid, but without stagnations. Utilizable in parks and gardens in group or as isolated specimen, or as road tree, furthermore, it bears even drastic pruning and can be grown as bush or shaped for hedges, fences and windbreaks. 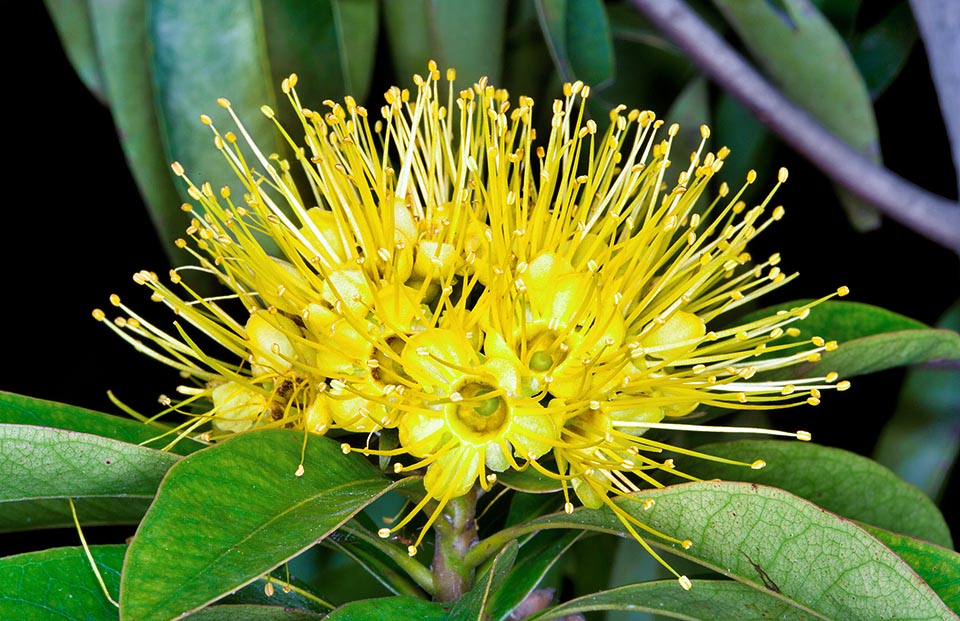 Cultivable also in capacious containers, in particular the dwarf varieties, in organic loam with addition of coarse siliceous sand per a 30%, to be sheltered in winter in particularly luminous location, where the climate does not allow the continuous permanence in open air, with lowest temperatures not under the 10 °C. Regular and abundant watering in summer, more spaced in winter, but without ever allowing the substratum to dry up completely, and fertilizations in spring summer preferably with hydrosoluble balanced products with microelements.

The plant is the emblem of the city of Cairns in northern Australia. The brown, hard, wood resistant and long-lasting was in the past used in the constructions.