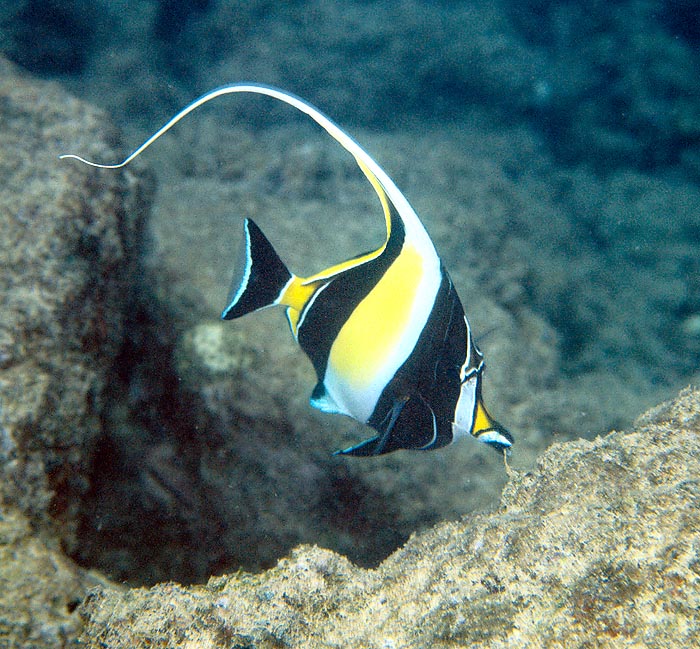 The Zanclids (Zanclidae) form a small family of marine tropical fishes, whose most known member, because much sought for in the aquariophily (and for whom the CITES monitors the relevant trade), is a species widely used as ornamental fish, known under the common names of Moorish idol or Horned zanclus (Zanclus cornutus Linnaeus, 1758).

Taxonomically, this fish and the other species are afferent to the class of the Actynopterygii, order Perciformes, family Zanclidae and genus Zanclus.

More precisely, till several years ago, it was generally thought that the species of the genus Zanclus were two, the Zanclus canescens and the Zanclus cornutus.

Nowadays, on the contrary, we are almost convinced that in reality, there is only one species: the Zanclus cornutus.

This concept is still not accepted by all; some biologists say that the difference the others were pointing out in the past comes from the sex; the International Code for Zoological Nomenclature (ICZN), for the moment accepts the species Zanclus cornutus.

The zanclids, and therefore also the moorish idol, which, by some Muslim ethnic groups is considered as a sacred fish, live in the coastal waters of the tropical seas. They may be found in the Indian Ocean, the southern Atlantic, the Red Sea, but are mainly present in the tropical waters of the Pacific Ocean.

They mainly frequent the reefs rich of vegetation (algae, marine phanerogams), venturing also inside the mangroves.
Their diet is essentially vegetarian, not too frequent particularity in the marine fish species; on the other hand the too narrow mouth and the teeth they have would make very difficult for them to seize animal preys, however small the might be.

The Zanclidae form a minor family as number of species, intermediate for various characters between the extremely elegant Chaetodontids (Chaetodontidae), and the Acanthurids (Acanthuridae), otherwise known as surgeonfishes. 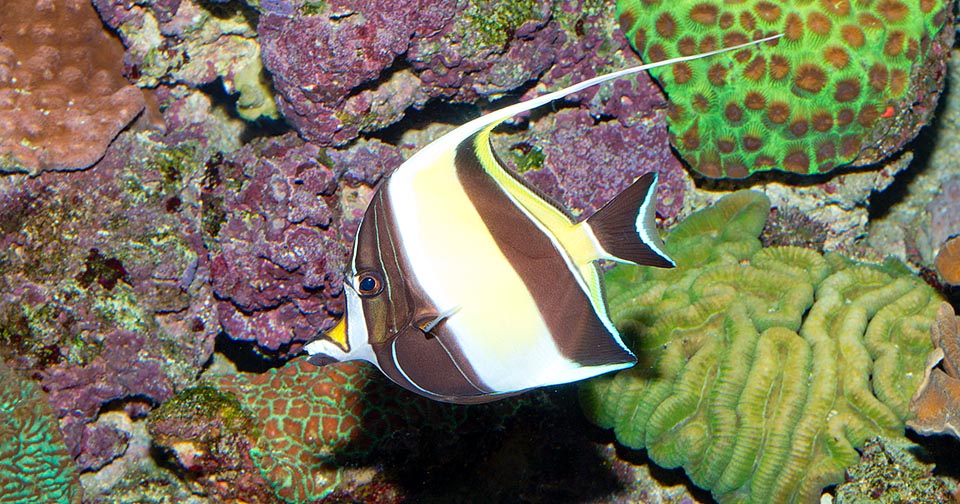 Zanclidae form a family intermediate for various characters between the elegant Chaetodontids, the butterfly fish, and the Acanthurids, the surgeonfishes © Giuseppe Mazza

A similar character is found only, and even rarely, among the chaetodontids, which, even if smaller than the zanclids, are however paradoxically less related systematically than what are the acanthurids. In fact, anatomically, these last have thorny rays of the fins less developed and in a lesser number, thus evidencing a taxonomic affinity. The Zanclus cornutus, in the shape of the body and the colouration of the livery, at a first glance reminds more the Pennant coralfish (Heniochus acuminatus), one of the most diffused ornamental species. 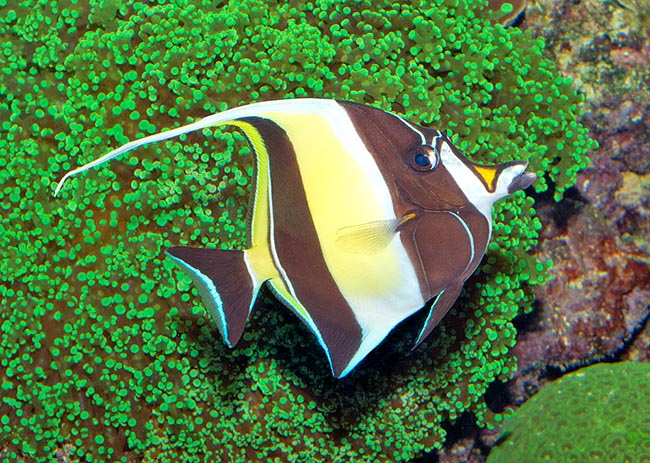 Young captive specimen. They are herbivorous and delicate fishes to be left to big public aquaria © G. Mazza

An odd characteristic of the species, to which is due also the scientific name, stands in the presence, close to the eyes, of two small bony protuberances similar to small horns. The livery, very showy, is formed by dark vertical stripes, on a pale background with very neat outlines. The background colour is a nice very pale golden yellow; the stripes, on the contrary, have a nice blackish brown colour.

It is a very delicate and friendly fish. It needs temperatures of 25-29 °C. In aquarium, it is suitable for living together with reef fishes of other species, such as those afferent to the family of the Acanthurids. There have never been cases of interspecific hybridization.

When captive, it needs constant additions in water of trace elements and of bioelements, in order to improve its resistance to the fungal and protozoic deseases, and, especially, it is necessary to furnish it of vegetables, such as boiled spinaches. It swims with alternate strokes of the pectoral fins. Till now, there is no information and data about its reproduction, even if many ichthyological biologists suspect an external reproduction. The vulnerability index of this species is of 12 over 100.