The Elongate surgeonfish or Yellowmask surgeonfish (Acanthurus mata Cuvier, 1829), belongs to the class Actinopterygii, the ray-finned fishes, to the order of the Perciformes and to the family of the Acanthuridae.

The name of the genus Acanthurus comes from the Greek “akantha”, thorn, and “ura” = tail, due to the spine, sharp as a razor, these animals do have on both sides of the caudal peduncle. The name of the species mata , resumes that given by the natives in India along the Coromandel Coast.

It has a very vast distribution in the tropical Indo-Pacific. Starting from the Red Sea and from South Africa, it reaches eastwards the Marquesas and Tuamotu Islands, northwards, Japan and southwards New Caledonia.

It is associated with the madreporic formations, and even if going down along the outer ridges of the reefs it may reach the depth of 100 m, it usually goes swimming between the 5 and the 45 m. It does not disdain the murky waters it often frequents looking for plankton and debris. 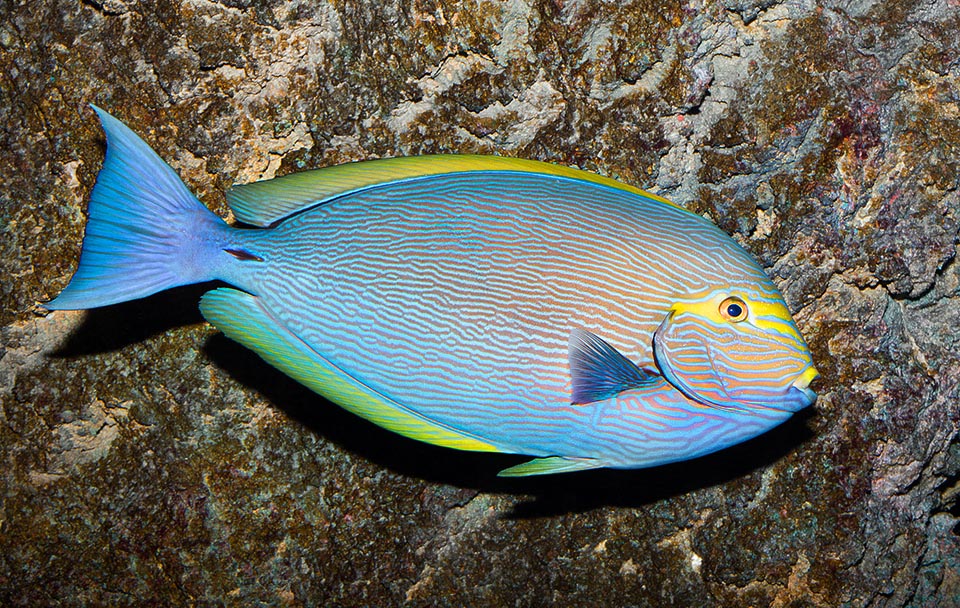 The Elongate surgeonfish (Acanthurus mata) has a vast diffusion in tropical Indo-Pacific. It can instantly change colour if needed. It reaches 50 cm and exceeds the 20 years of life, mainly eating when young phytoplankton and benthonic algae and then zooplankton, benthonic invertebrates, vegetables and various detritus © Giuseppe Mazza

The scales are tiny and the livery is quite variable depending on the camouflaging exigences and the mood of the fish. The light blue horizontal arabesque on reddish brown background, may in fact get paler and disappear instantly to leave the place to a pale and uniform bluish livery. More stable are the typical yellow stripes around the eye: two parallel on the front and one between the eye and the operculum, as highlights the vulgar name of yellowmask surgeonfish. Like for Acanthurus chirurgus, the retractile sharp blades of the caudal peduncle are dangerous for man.

The Acanthurus mata may exceed the 20 years of life and the reproduction occurs in group, usually during the full moon night, with the males in nuptial livery and the eggs entrusted to the currents.

The young nourish of phytoplankton and of benthonic algae, the adults mainly of zooplankton, but also of small benthonic invertebrates, vegetables and debris. In short, they eat a little of everything, so much that they have been sighted even while chasing the schools of big carnivorous fishes like the Caranx sexfasciatus in order to it eat up their feces.

Locally, especially in Thailand and Philippines, the yellowmask surgeonfish is caught for feeding purposes. As a whole, it shows a stable population but the vulnerability index of the species marks already 39 on a scale of 100. If it is true that the Acanthurus mata has a very vast diffusion and that, whatever happens, it will never have difficulty in nourishing, the resilience is unfortunately vey low: all going well, are in fact necessary 4,5 to 14 years for doubling the populations decimated by the events.