The Doctorfish (Acanthurus chirurgus Bloch, 1787), belongs to the class Actinopterygii, the ray-finned fishes, to the order of the Perciformes and to the family of the Acanthuridae that presently (2016) counts 6 genera and 82 species.

The name of the genus Acanthurus comes from the Greek “akantha”, spine, and “ura” = tail, due to the spine sharp like a razor these animals do have on the sides of the caudal peduncle. 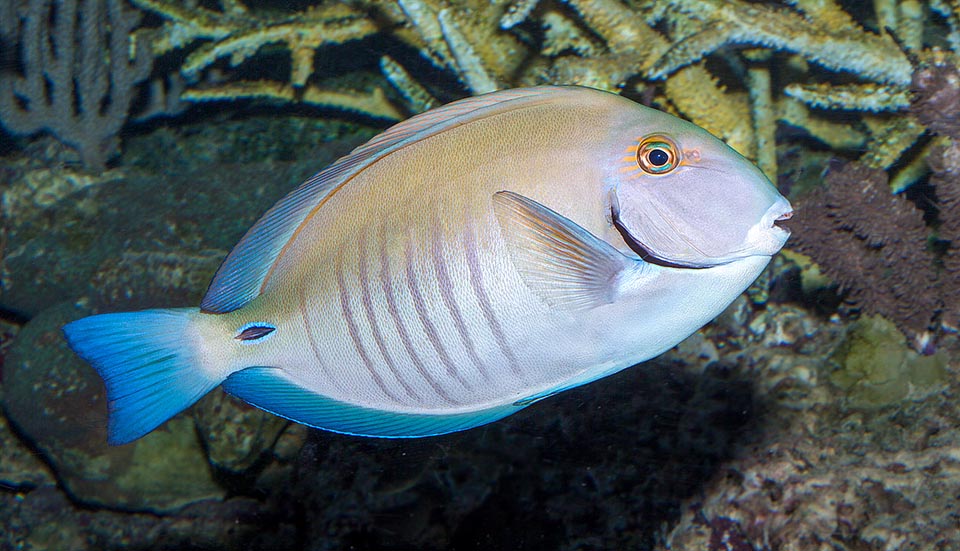 Almost exclusively, it lives in the tropical waters of the Atlantic Ocean. The greatest concentration stands in America, from Massachusetts and Bermuda to Rio de Janeiro, but eastward we find it in the waters of Senegal and at Ascension Island.

It swims among the rocks and the madreporic formations between the 2 and the 15 m of depth, going down occasionally even to 25 m along the ridges of the reefs.

The Acanthurus chirurgus usually reaches the length of 35 cm with a record of 39 cm and 5 kg of weight. 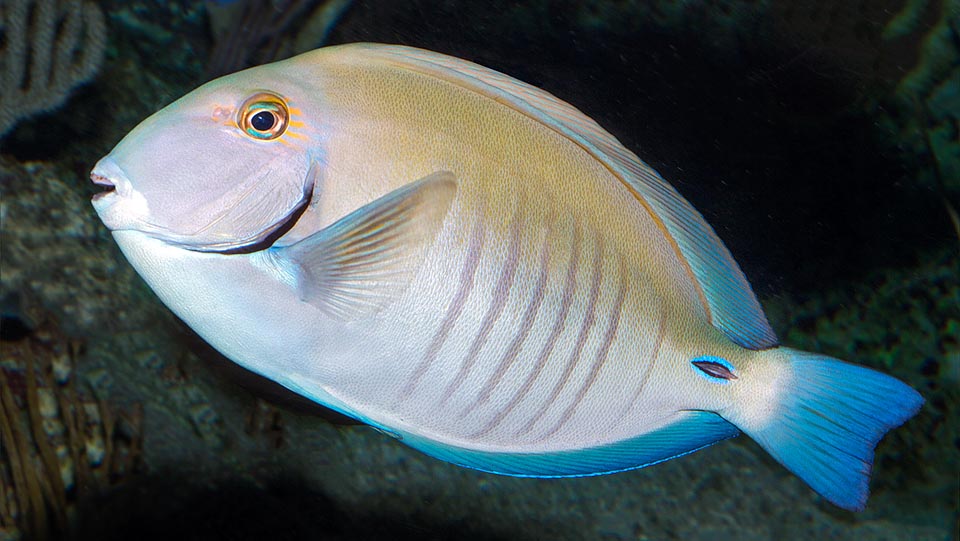 It reaches 5 kg with 39 cm of length and the showy sharp blade of the caudal peduncle, that has given him the name of surgeon, is dangerous also for man © G. Mazza

Flat, oval body, with a set of teeth made to cut the plants, with a maximum, in the adults, of 18 small maxillar teeth that interlock like scissors on the 20 of the mandible. One big dorsal fin only with 9 spiny rays and 24-25 soft rays. The anal is symmetric but shorter, with 3 spiny rays and 22-23 unarmed ones. The pectoral fins, dark, have 16-17 rays, the ventral 1 spine and 5 soft rays. The caudal fin, almost truncated in the young, is trimmed in the adults, for a slow swimming with quick bursts when needed. The livery, in the whole greyish brown with elegant light blue fins, presents a ten of dark vertical bands. The eye is camouflaged by orange yellow traits between the nostrils and the operculum and the cutting blade of the caudal peduncle is particularly showy, emphasized by a fleshy bright light blue containment case. Unmistakable reminder for predators looking for trouble.

The Acanthurus chirurgus nourishes mainly of more or less filamentous algae of the genera Chaetomorpha, Cladophora, Dictyota and Wurdemannia, but also of more consistent algae and of aquatic plants belonging to the genus Thalassia, that form the seagrass meadows of the tropics. In order to better crush them in the stomach, it often swallows, as the birds do, some sand, and often integrates, like other Acanthurus, this vegetarian diet with organic debris; so much that at the New York aquarium a specimen has lived 5 years contenting, besides some occasional algae, of small fragments of fish and of bivalved molluscs. 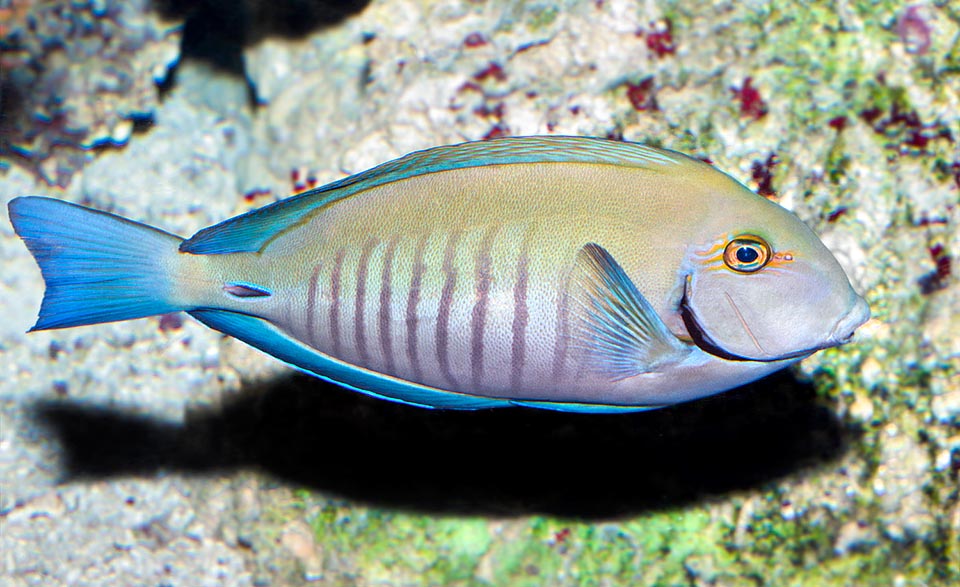 Easy to recognize, due to the light blue fins and a ten dark vertical bands, is a vegetarian and detritivore species with very low vulnerability index © Giuseppe Mazza

The doctorfish grazes, especially during the day, in free groupings. The fecundated eggs are abandoned to the currents and the planktonic larvae develop in the open sea. When, once reached a certain size, the young come back in school to the reef, they often behave as cleaner fishes, like the young of the Acanthurus coeruleus. They grow up ridding from the parasites big animals, including the green sea turtles (Chelonia mydas) incluse.

Though locally caught for feeding purposes, the doctorship is not an endangered species. It has a good resilience, with populations that can double in 1,4-4,4 years, and a surely low vulnerability index of 23 on a scale of 100.

Acanthurus chirurgus was last modified: May 3rd, 2022 by Giuseppe Mazza