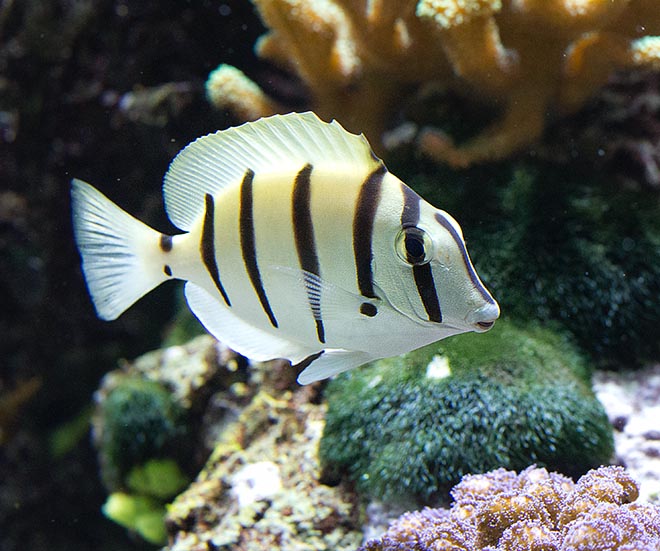 Convict surgeonfish (Acanthurus triostegus Linnaeus, 1758), belongs to the class of the Actinopterygii, the ray-finned fishes, to the order of Perciformes and to the family of Acanthuridae.

The name of the genus “acanthurus” comes from the Greek “akantha”, spine, and “ura” = tail, due the spine, shaped as a razor that these fishes have on the two sides of the tail.

The name of the species comes from the Greek “treis” = three, and “stego” = to cover, with reference to the branchiostegal membrane (the mobile membrane on the ventral and back side of the operculum which allows the breathing movements of the fish) protecting the gills and in this species has, seemingly, three rays instead of five as in the other Acanthurus. Actually, the other two do exist, but are small and hidden.

The Acanthurus triostegus has an incredible vast diffusion, in the tropical waters of the Indian and of the Pacific oceans, and unlike the Acanthurus dussumieri and the Acanthurus lineatus it reaches also California and goes southwards along the American coast up to Panama.

It lives in the madreporic formations, but also offshore, going down up to 90 m of depth. Often, it grazes also close to the discharges of fresh water looking for seaweeds growing on the stones.

Easily identified by the 5 black bands, a sixth one is broken by the typical caudal spine © Giuseppe Mazza

The body, silvery grey on the sides, tends to the olive-yellow in the upper part. It is crossed by five black vertical bands: the first disguises the eye, the second stops at the pectoral and the following three cross practically the whole body.

At the level of the caudal peduncle, we note the hint of a sixth band, stopped halfway by the erectile and cutting spine, typical of the genus, placed in a housing of the same colour of the body. Also here, as for the Acanthurus lineatus, the fish is unique indeed and the predators are aware of this.

Also the head, elongated, has its black band, with fleshy lips, and has tiny teeth. Several gill rakers are visible.

It often swims in crowded schools looking for edible filamentous algae: the juveniles in low waters and even in the tidal pools, the adults amongst the corals and the rocks. They nourish also of zoobenthos, in particular of foraminiferans of the genus Calcarina, phytoplankton, cnidarians and small benthic crustaceans. 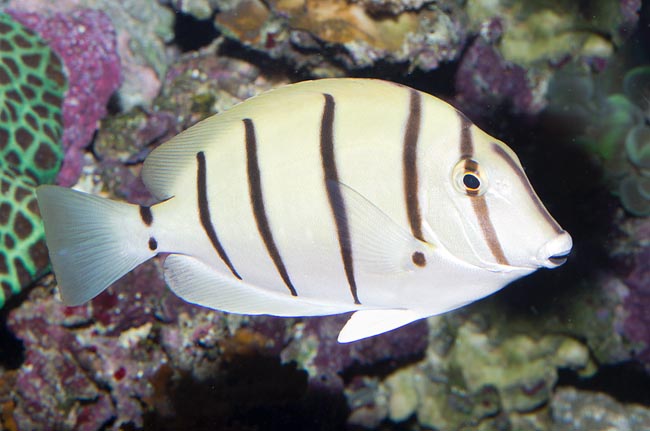 The reproduction is collective with clouds of pelagic eggs and sperm, a golden opportunity for the birds of prey which often take advantage of the commotion.

It is fished and consumed locally, even if, depending on what they have grazed, the risk exists of getting a serious alimentary intoxication called as ciguatera.

It is a species with an extremely low rate of vulnerability: 16 per 100, with populations that can double in 1,4-4,4 years.