The Whitecheek surgeonfish, called also Black surgeonfish or Golden rimmed surgeonfish (Acanthurus nigricans Linnaeus, 1758), belongs to the class of Actinopterygii, the ray-finned fishes, to the order of Perciformes and to the family of Acanthuridae.

The name of the genus “acanthurus”, comes from the Greek “akantha” = spine, and “ura” = tail, due to the spine, sharp as a razor, these animals have on both sides of the caudal peduncle.

The name of the species “nigricans” comes from the Latin “nigrico” = tend to black, and therefore “tending to black” with clear reference to the dark livery.

It has a very vast diffusion in the tropical waters of the Eastern Indian Ocean and on both sides of the Pacific.

Just to give an idea of its distribution, we find it at the Maldives, the Cocos Islands, Christmas Island, in India, Thailand, Australia, Indonesia, New Guinea, Micronesia, Philippines, Taiwan, China and southern Japan. In the southern hemisphere, it reaches Tonga and New Caledonia. Eastwards, it is at home in Samoa, Marquesas Islands, the Hawaii and the Galapagos, up to Mexico and various Central American nations.

It mainly lives in shallow waters, in the sunny lagoons rich of filamentous sea weeds, but can go down on the outer side of the reefs up to more than 60 m of depth. 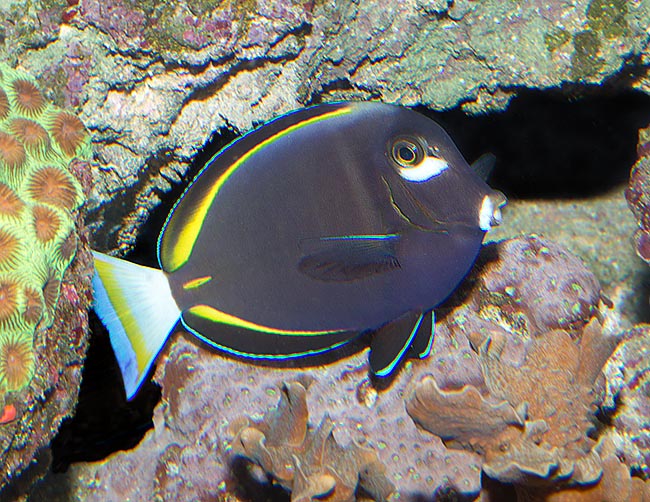 Acanthurus nigricans may hybridize with A. achilles, A. leucosternon and A. japonicus © Giuseppe Mazza

On the bluish-brown body, very dark, stands out a white spot close to the lips and a bigger one under the eye, which justifies the epithet of surgeonfish with the white cheeks. As a matter of fact, there are many more or less black Acanthurus but none has this particularity. At the base of the dorsal and of the anal, we note also two elegant golden bands, as highlights the vulgar name of golden rimmed surgeonfish. They become wider towards the caudal peduncle for indicating the housing of the same colour, from where comes out, when the fish for defence folds the tail, a sharp and poisonous spine that discourages the aggressors. Also the caudal fin, white, shows a golden vertical band just before the extremity; whilst the other fins often have an elegant blue fine border.

The whitecheek surgeonfish swims all the day round, in small schools, nourishing of filamentous sea weeds and of the pellicle of microscopic algae and debris covering the sea-beds, but grazes also consistent benthic algae such as those belonging to the genera Caulerpa, Cladophora, Codium, Dictyota, Gracilaria, Laurencia, Padina, Polysiphonia and Turbinaria.

The eggs hatch rapidly, in less than two days from the fecundation which takes place mid-water. The larvae, dispersed by the currents, live still for 2-3 days at the expense of the yolk sac and then begin their diet based on microscopic organisms. When they go back to the reef, once the metamorphosis is completed, they already resemble to the adults, and for growing sheltered from the dangers they live among the branches of the great madrepores.

Even if the vulnerability index of the species is presently modest, marking 34 on a range of 100, it is necessary to control the populations as having a long reproductive cycle and 4,5-14 years for doubling the number.