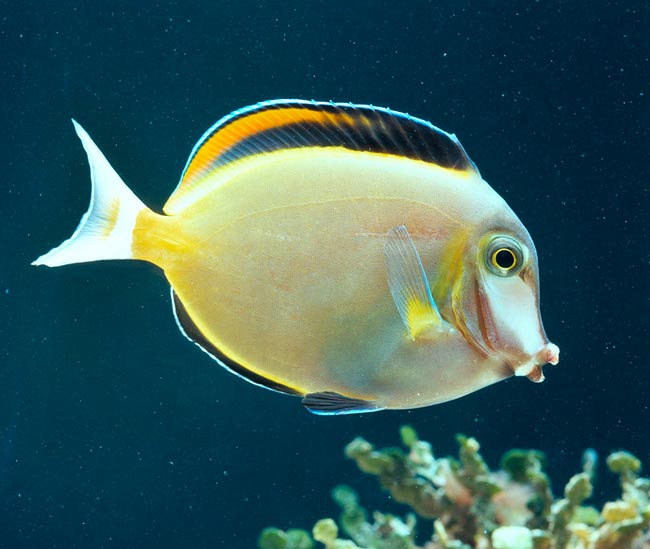 Acanthurus japonicus doesn’t live in Japan only, but even up and beyond Indonesia © Giuseppe Mazza

Little present even in public aquariums, the Japan surgeonfish (Acanthurus japonicus Schmidt, 1931), belongs to the class of Actinopterygii, the ray-finned fishes, to the order of Perciformes and to the family Acanthuridae.

The name of the genus Acanthurus comes from the Greek “akantha”, spine, and “ura” = tail, due to the spine, shaped like a razor, these fishes have on both sides of the tail.

The name of the species, japonicus = of Japan in Latin, indicates the best-known country of origin.

In addition to Japan, the Acanthurus japonicus is at home in Taiwan, in the Philippines, in Indonesia, Palau and in the Andaman, Ogasawara and Ryukyu islands.

It lives in the madreporic formations, usually on the shelves and on the ridges between the 5 and the 15 m of depth. It is rare to find it under the 20 m.

It can reach the 21 cm, but its average length is approximately of 14 cm. The body is flat, almost oval, with only one big dorsal fin with 9 spines and 28-31 soft rays. The anal is symmetrical and shorter; the ventral and the pectoral ones have a modest size; the caudal is truncated. The colouration is somewhat variable and in function of the mood of the fish, but with some points: there is always a wide white band going from the eye to the upper lip; the soft rays of the dorsal fin have a showy orange band; the caudal peduncle, with its cutting blade, is yellow. The body can be very dark, with brown and blue hues, or very clear, even almost yellow. The mouth is protruding, with two flesh lips and tiny teeth. 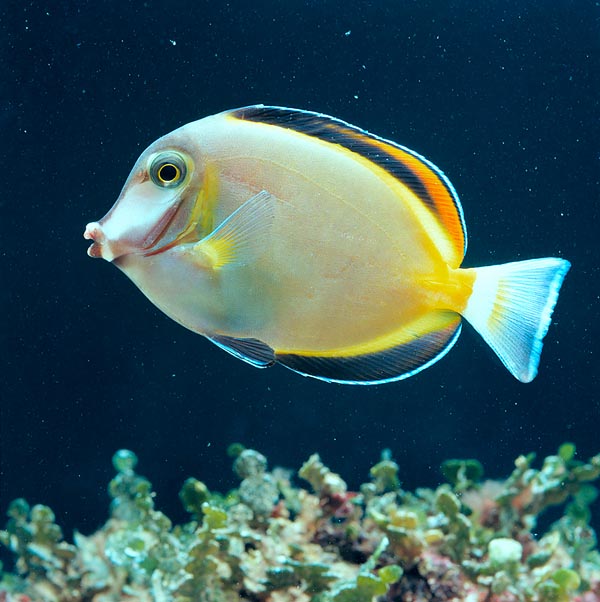 The colouration is much variable but with some firm points. It is not endangered © Giuseppe Mazza

The Acanthurus japonicus is restless. It swims all the day round, in more or less numerous schools, in the sunniest zones of the reef, where the seaweeds do grow. Even if chiefly vegetarian, it often enriches its diet with small crustaceans and other animals it finds among the seaweeds and the corals. After the fecundation, the eggs disperse and the larvae go through various stages.

Seen the modest size and the omnivorous tendency, it is a fish which might be, theoretically, hosted in the aquaria, but it is not so. Like many Acanthurus it is, in fact, really quarrelsome and does not tolerate the presence of the conspecifics. And, as that was not enough, it is very sensitive to a ciliate protozoon, the Cryptocaryon irritans, which causes the white spot disease.

Due to the modest size it is not even fished for food uses. The populations can double in only 15 months and the rate of vulnerability, 22 per 100, is obviously low.