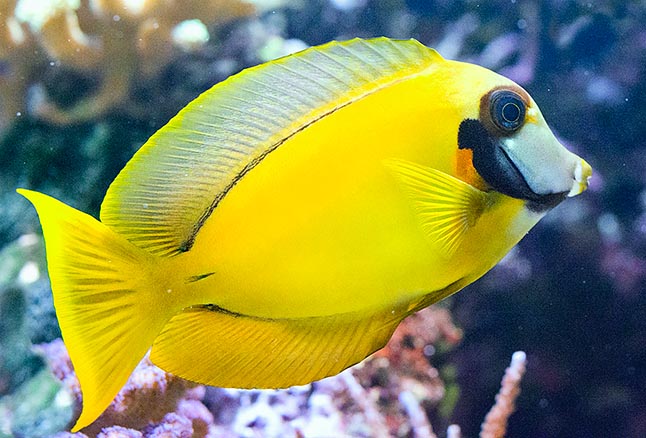 The little known Chocolate surgeonfish (Acanthurus pyroferus Kittlitz, 1834) belongs to the class of the Actinopterygii, the ray-finned fishes, to the order of Perciformes and to the colorful family of Acanthuridae.

The name of the genus Acanthurus comes from the Greek “akantha”, spine, and “ura” = tail, due to the corneous spine, edgy, these fishes carry on the two sides of the tail.

The name of the species, pyroferus comes from the Greek “pyr” = fire and from the Latin “fero” = to carry, therefore “which carries the fire”, with reference to mask of the face.

The Acanthurus pyroferus has a very vast diffusion. It is found, in fact, in the tropical waters of the Indian Ocean as well as in those of the Pacific.

It loves the atolls and the coralline reefs, also mixed with sand, rocks or silt, where it often lives in a few metres of water looking for small algae, but we find it also at the precipice borders of the madreporic shelves, up to about 60 m of depth. 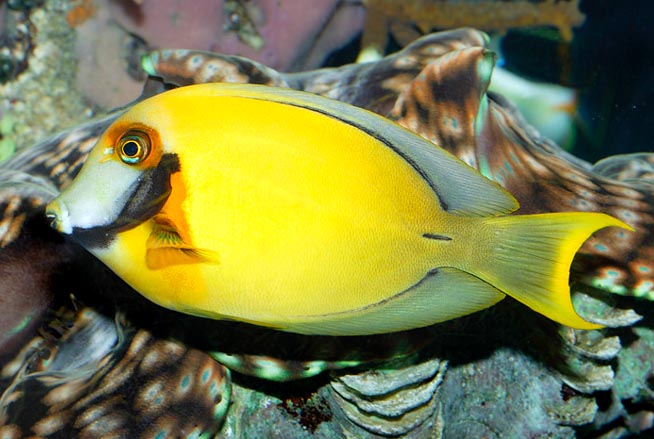 It does not exceed the 25 cm. The body is flat, higher on the front, enlarged by a splendid dorsal fin with 8 spiny rays and 27-30 soft and by the anal, symmetrical but shorter, with 3 spiny rays and 24-28 unarmed. The caudal is shaped like a crescent and ends always in a bright yellow border extending to all the body in the young forms, much similar, depending on the zones, to the Centropyge flavissimus, the Centropyge vrolikii or the Centropyge heraldi. They graze along with these species and in this way they do not enter in conflict with the parents who might take them for competitors.

The pectoral fins are yellow and the ventral, darker, have a spine with 5 soft rays. As the animal grows up, it emerges, little by little, the characteristic pattern of the head, with a black-violaceous band at the level of the operculum, sided, towards the pectoral fins by an orange-brown zone which interests also the eyes in contour. While ageing, also various parts of the body fade towards the chocolate colour, from which comes its common name. On one side, this mask has mimetic functions and on another is the mark of maturity for the conspecifics, which entitles to precedence for grazing and to a territory, seen that, like all Acanthurus , also the chocolate surgeonfish is fairly pugnacious. It is not by chance that also this fish carries on the caudal peduncle a black horizontal small bar, for showing the importunators the housing of the scalpel. 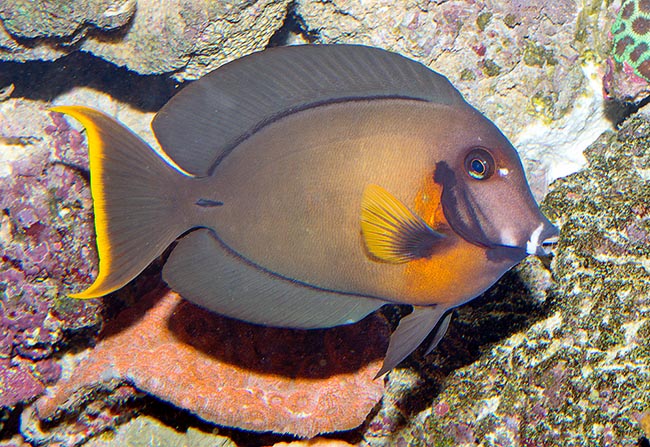 While ageing, also various parts of the body fade towards the chocolate colour © Giuseppe Mazza

It is not poisonous, as is the case of other species, because even if some grooves are evident, the adults do not have poison glands.

The pelagic eggs generate various larval stages, and the juveniles go through three different colourations. For the considerations about their aquarium life, and the related sad trade, what said for the Acanthurus leucosternon is valid.

It stands however among the least endangered fishes, with a vulnerability level of 29 per 100. It is not consumed by the man due to its modest size and the populations grow relatively quick, adapting even to the reef deterioration.