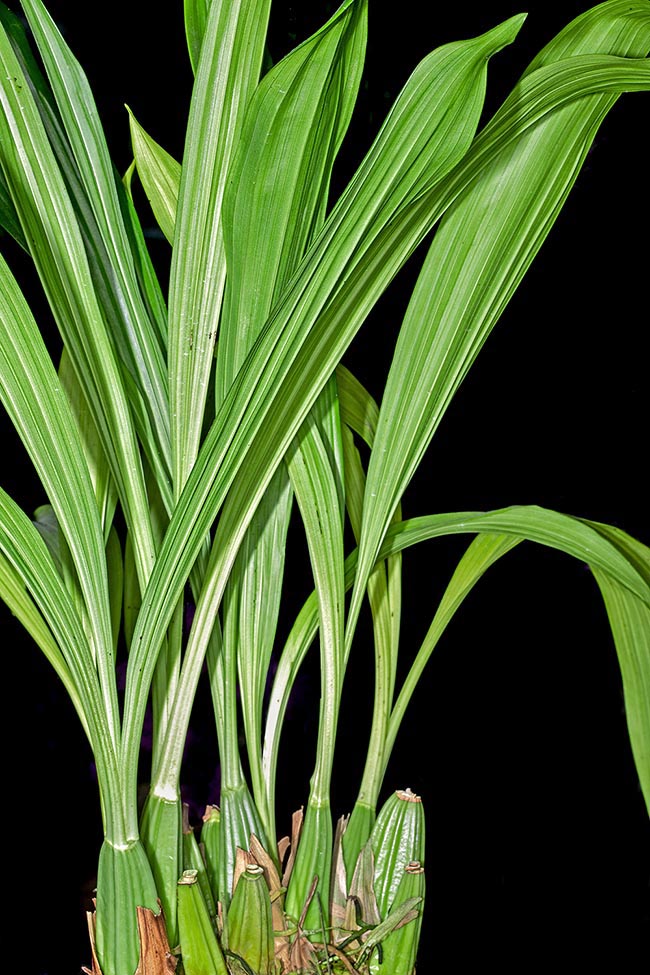 Acineta superba (Kunth) Rchb.f (1863) is a species belonging to the tribe Cymbidieae, subtribe Stanhopeina of the family Orchidaceae, one of the most diffused and rich of the vegetable kingdom with more than 28.000 species distributed in about 763 genera.

In Colombia its common name is Periquito (Parakeet or Budgerigar), whilst elsewhere it is called with its specific name.

It is a species present in the Nations of Latin America (Panama, Venezuela, Colombia, Ecuador and Peru).

In Peru were found plants in the Pasco Region a few miles south from Villa Rica, where they grow high among the canopy of the cool and humid pluvial forest up to 1467 m of altitude.

In Venezuela plants were found near Caracas at 930-1700 m of altitude, in several locations of the Aragua State and near Méruida at 1900-2100 m of altitude. In Panama and in Colombia plants have been reported on the eastern slopes of the Andes.

The term Acineta comes from the Greek “ἀκίνητος” (akinetos) with the meaning of stationary, motionless because of its rigid labellum, having no junctions. The specific epithet refers to the Latin “superbus”, magnificent, splendid, presumably for the large size of the plant and for its hanging inflorescences with quite fragrant flowers.

It is a herbaceous epiphytic cespitose plant, up to 70-120 cm tall.

If located on steep embankments, it behaves as lithophyte, colonizing the crevices on the rocks. The roots are tuberiform and spherical. The pseudobulbs, grouped on the rhizome, are ovoid in shape, little compressed, 14-15 x 5,0-6,0 cm, just grooved and rather angular, with a basal sheath.

The inflorescences are hanging racemes, with a maximum of 15 flowers, more sometimes, having a pleasant vanilla scent. They form from the base of the pseudobulbs and can reach 25-30 (70) cm. The flowers typically resupinate, 7,5 cm or more broad, usually not completely open, are subglobose, fleshy, dotted with dark red of cream-coloured background, subtended by an elliptical-ovate, up to 2 cm long, membranous bract. 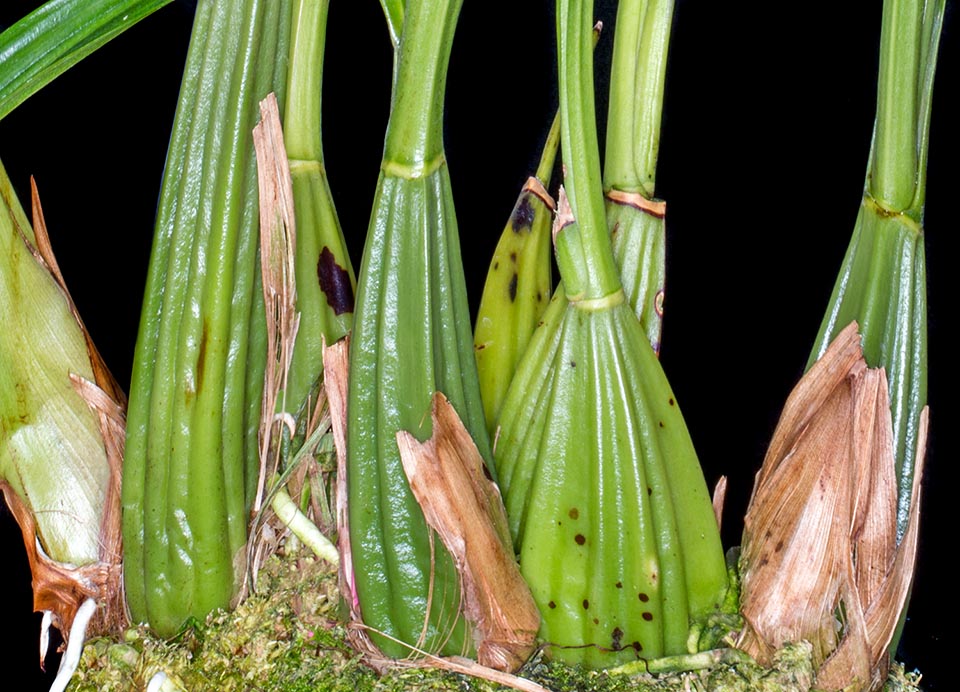 Grouped on rhizome, the pseudobulbs, even 15 cm long and 6 cm broad, are ovoid, little compressed, just grooved and rather angular, with a basal sheath © G. Mazza

The labellum is about 5 cm long and 3 cm broad, fleshy, tripartite, with the basal portion (hypochilus) sack-like, of yellowish brown colour inside with red-purple spots, with the intermediate part (mesochilus) with two keels, erect, lip-shaped, that unite in a central callus, purple red with spots, and the distal part (epichilus) oblong spatulate, concave, with basal hump, 1,6-2,0 x 0,5-0,6 cm and with sharp apex of yellow colour. 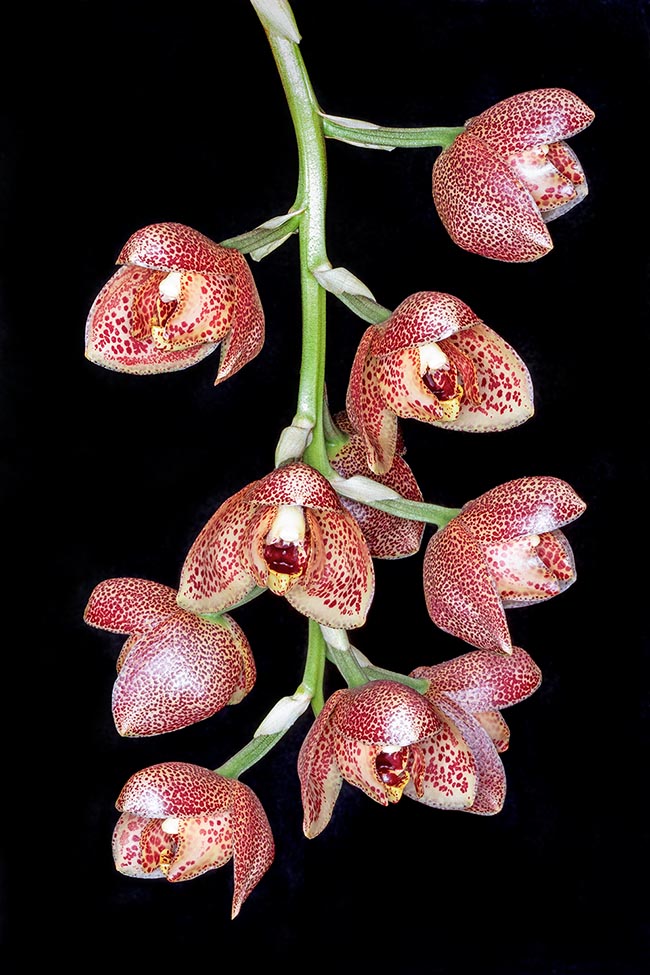 The showy hanging inflorescences, up to 25-30 cm long, exceptionally 70, can bear up to 15 very perfumed flowers. They are stained with red and can reach 7,5 cm or more, usually they appear not completely open © Giuseppe Mazza

The column is robust, clavate, lightly compressed, pubescent, winged at the apex, 1,8-2 or more cm long, with ligulate stem carrying the two pollinodia. The wings unite at the apex and form a white hood, over the anther, dorso-ventrally compressed, 0,6-0,7 cm long. At the base of the column the retinaculum (or viscidium) is semi-moon shaped. The stigma is transversally fissured and the rostellum is linguiform, 1,7-2,0 x 0,5-1,1 cm. The ovary is tricarpellate, with an almost circular section, with dark brown, 3,5-3,8 cm long scales.

The fruit is a capsule that releases many powdery seeds.

The smell and the shape of the flower attract the male bees of Eufriesea concava (Friese, 1899) in a species-specific relation.

For the cultivation of Acineta superba it is necessary that the night temperature is always less than 4 °C than the diurnal.

The air humidity must maintain around 80-85%, somewhat less in summer.

The too dry air impairs the development of the plant inhibiting the growth with consequent yellowing of the leaves and subsequent desiccation.

For indoor cultivation it is good to use a hanging basket made with loose mesh thread, or spaced wood staves covered by sphagnum moss. The loam must be breathing and loose in order to maintain some humidity, but not too much, and to allow the roots to dry up quickly after the irrigation.

Acineta superba loves the light but not the direct sun, therefore, during the warm season, if exposed in a window facing south it is a good thing to place it behind a curtain so as not to scald it. While irrigating the water should drain freely from the pot, as the stagnant water can cause the roots to rot.

It is advisable to use rain water or obtained by reverse osmosis, possibly added to an equal quantity of tap water that contains mineral salts useful to the plant. Between one watering and another to wait until the substratum is almost dry.

For best growth it is good to fertilize every 10-15 days with a fertilizer diluted 50% of what is prescribed on the packaging. To pay attention to the salts contained in the fertilizer as the roots of Acineta superba are very sensitive to the salts of nitrogen, phosphorus, potassium, etc., that could burn them. The effects of the salinization of the substratum manifest themselves with the blackening of the foliar tips. In these cases, it is good to transfer the plants into a new substratum.

Is recommended a fertilizer specific for orchids with microelements of proven reliability. 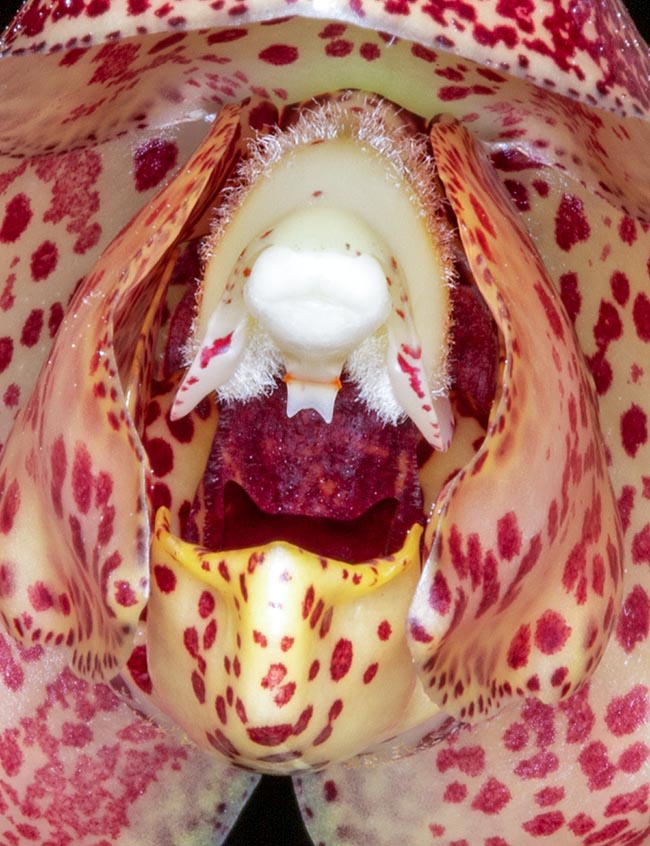 Flower enlarged detail. Below, we note the container of the nectar that emits a scent aphrodisiac for the males of Eufriesea concava, the pollinating bee of the species. Entering the flower this strikes during the meal the viscidium, the concave sticky white column below, visible at the centre of the image, that ends up glued on the back or the head of the insect carrying two voluminous pollen masses. They are destined for the female organ of another flower. To avoid consanguinity, the two sexes of this hermaphrodite species in fact mature in different times © G. Mazza

After blooming it is good to remove the inflorescence and, if necessary, to proceed to a new transplant. This is appropriate for favouring the adaptation as well as for preventing the decomposition of the eventually damaged roots.

Once reached the size of a nice bush only thinnings can be done. In any case, for each new plant it is suggested to leave at least three pseudobulbs. The repotting should be done only when the growth of new roots has just started. This allows the plant to not be subjected to excessive stress.

During the winter the plant must go into dormancy and for such reason it must not be placed in sites with temperatures exceeding 20-22 °C during the day and 9-12 °C the night.

In the mild climate regions, it can be placed outdoors, in a garden (or on the windowsill), in sites repaired from. the rain and the wind. Moreover, during this period the plant must not be fertilized and waterings are to be done only when the support is not completely dry.

If during the winter period there is no dormancy, the plant begins to wilt and from year-to-year forms fewer and fewer flowers until it no longer produces them.

In spring, with the advent of new shoots, the dormancy period ends, and the regular watering and fertilization may be resumed.

Industrially, the reproduction is done by germination of seeds or by micropropagation of meristems. There are several cultivars and hybrids that the collectors subject to the expert’s evaluation with possible prizes awards. The Royal Horticultural Society has assigned the Award of Garden Merit, AGM) to Acineta superba ‘Colmanii’ and to 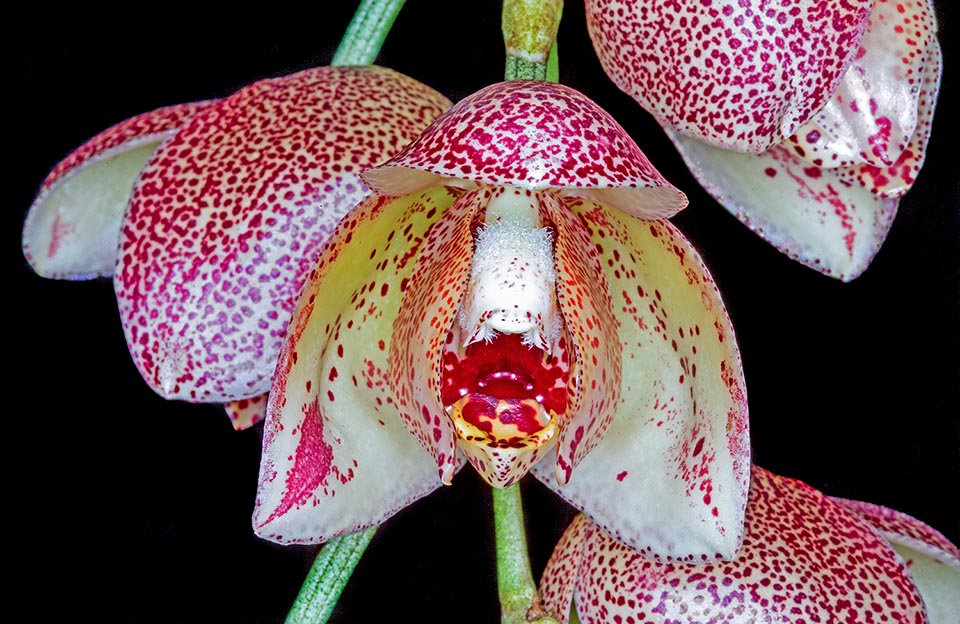