The species is native to Trinidad and Tobago and north-eastern Venezuela (Sucre) where it grows epiphyte on the trees of the forests, in the underwood or on rocks covered by humus.

The generic name is the Greek substantive “αἰχμὴ” (aichmè) = spearhead, with reference to the spiny apices of the sepals and of the floral bracts; the specific name is the combination of the Greek adverb “δίς” (dis) = two times and of the substantive “χλαμύς, υδοϛ” (chlamys, ydos) = chlamys, cloak, with reference to the pairs of bracts that subtend the single flowers.

The Aechmea dichlamydea Baker (1879) is an evergreen herbaceous species, monocarpic (it blooms only once then dies), acaulescent, epiphyte, up to about 60 cm tall, formed by an imbutiform rosette of leaves forming a central cavity where gathers the rainwater. 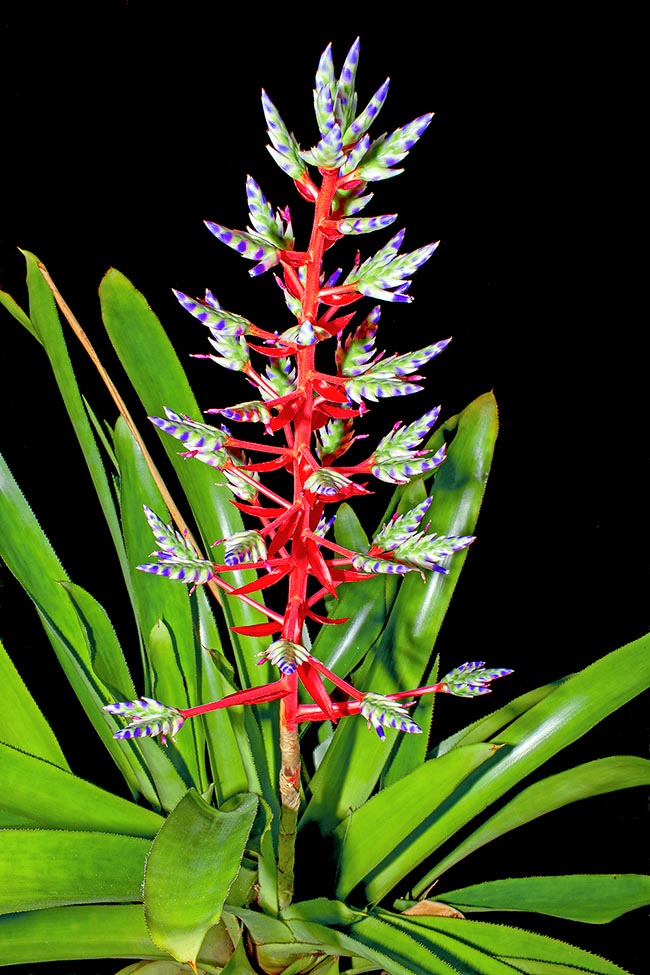 The Aechmea dichlamydea is an epiphyte native to Trinidad and Tobago and north-eastern Venezuela reaching the 60 cm of height on the trees and on the rocks covered by the underwood humus. The leaves are arranged in rosette with the typical cavity in the centre collecting the rainwater for facing possible drought periods © Giuseppe Mazza

The leaves are linear with rounded apex, but furnished with one short spine, and serrate margin, 60-90 cm long and 4-7 cm broad.

Inflorescence at the center of the rosette on a robust floral scape provided of lanceolate bracts with acute apex and entire margin of bright red color.

The scape ends in a panicle-shaped inflorescence, 30-50 cm long, with rachis and rachillae of color from dark pink to bright red, composed by several pedunculate spikes, more or less ascending, subtended by bracts similar to those of the scape, retroflex and of dimensions decreasing towards the apex.

The fruits are ovoid berries of dark blue color, about 1 cm long, containing several seeds. After blooming the plant stops growing and after a rather long time dies, but in the meantime it produces at the base new plants to which it transfers nutrients for their initial growth.

It easily reproduces by seed, put superficially on organic loam with addition of coarse silica sand per a 40-50 %, maintained constantly humid at the temperature of 24-26 °C, and through the new basal vegetations that can be detached when they have reached a dimension at least equal to one third of that of the mother plant.

Species with showy very long lasting inflorescences, utilizable in open air, as epiphyte as well as terrestrial, in the humid tropical and subtropical regions; its cultivation can be tried, in a particularly sheltered position, in the mildest warm temperate regions where temperatures close to the 0 °C are short lasting exceptions.

It grows in full sun as well as in partial shade and adapts to the cultivation in pot utilizing an aerated and draining substratum that may be formed by organic soil with addition of coarse silica sand per a 30-40 %.

It requires high temperatures, preferably not under the 18 °C in winter, and humidity of the 65-80 %, maintaining non-calcareous water into the central cavity, to be frequently renewed, excepting when in presence of low temperatures when it is better to leave it almost dry to avoid rottennesses. 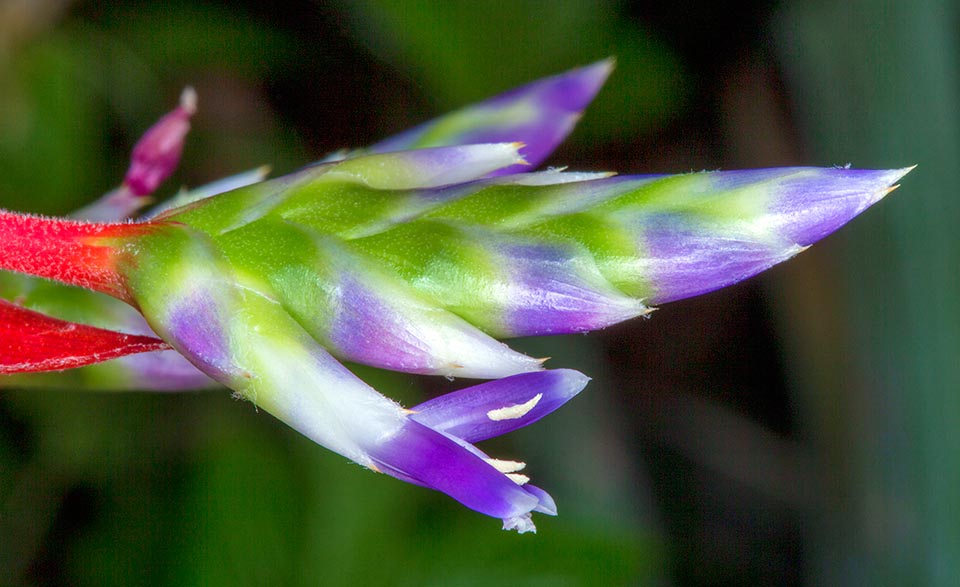 The showy panicle inflorescence, long lasting, reaches 50 cm with thick pedunculate spikes of 5-12 cm and flowers subtended by bractes tending to blue in elegant contrast with dark pink or bright red rachis and rachillae. After blooming, the plant dies slowly, transferring the nutrients to the small plant that come out from the base © G. Mazza

This last the rarest in nature and the most endangered, as it grows in two areas limited by the open forest, but is also the variety most appreciated, due to the size it can reach, about 1 m of height and diameter, and has originated some hybrids that are very appreciated.