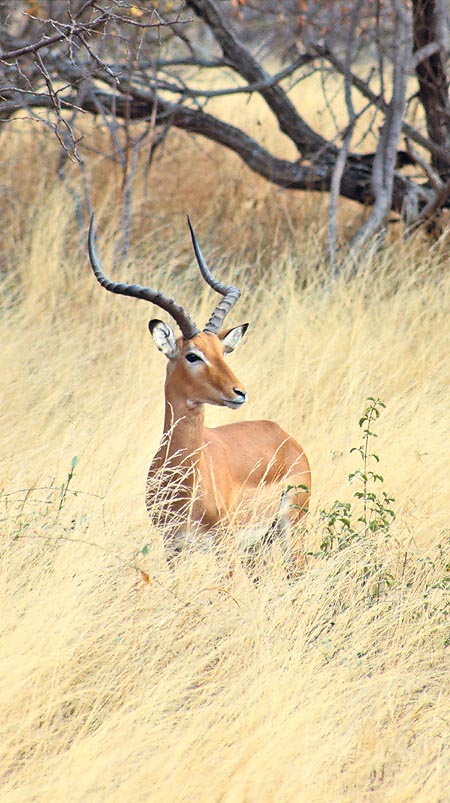 Grace and elegance in this male of Aepyceros melampus © Giuseppe Mazza

The Impala (Aepyceros melampus Lichtenstein, 1812, family Bovidae, order Artiodactyla), is a name since always known also to those not interested of Africa, synonym of grace, elegance and speed, so that even a famous and powerful American car, which had the name of this antelope, made dreaming those who were kids in the fifties and sixties.

The small-scale models in the hands of children of the low and slender Chevy, with its fins languidly turned down on the tail lights, similar to the eyelids of sensual movie star, along with Tarzan, the Watussi and lions, were, in those times, the only African realities known to the general audience.

The scientific name comes from the black dots standing out on the lower part of the paws, over the foot, whilst the Afrikaans name comes from the background colour tending to the reddish, however, the mantle of the impala is only apparently uniform. In reality, the shades melting in a delicate and mild on its livery may confer it, no matter how it may seem strange, also camouflaging properties, at least in some habitats. The background tint is a brown with two different shades: a reddish-fawn colour forming a sort of a star, edged on the sides, by an inferior paler zone which contrasts with the paws, also paler. The ventral part is white, as well as the throat area, the pinnae and the anal zone. A white stria stands over the eyes, whilst black ones appear on the tail and on the rear part of the thighs. The dots just over the feet giving the name to the antelope, are also black, and also the apex of the ears and the “bridles” at the corners of the eyes, which are even more conspicuous in the Angolan subspecies (Aepyceros melampus petersi) which, rightly for this reason, is called black-faced impala.

Occasionally, are reported of photographed white impalas: in some cases they can really be albino specimens, but there are also instances of specimens simply hypopigmented that are not affected by albinism and that do not have the red eye, very characteristic mark of evident albinism, and due to the transpiring of the retina red colour through a transparent iris and without pigment retina. However, I would feel not so sure to exclude the albinism in every white animal not having red eyes, at least, without genetic tests, because also in the human albinism the absent pigmentation and the red eye are not compulsory and there are cases of albinism without such marks or at least where such marks are not so evident.

About this, I quote the subspecies or races of impala usually recognized in the zoological field: 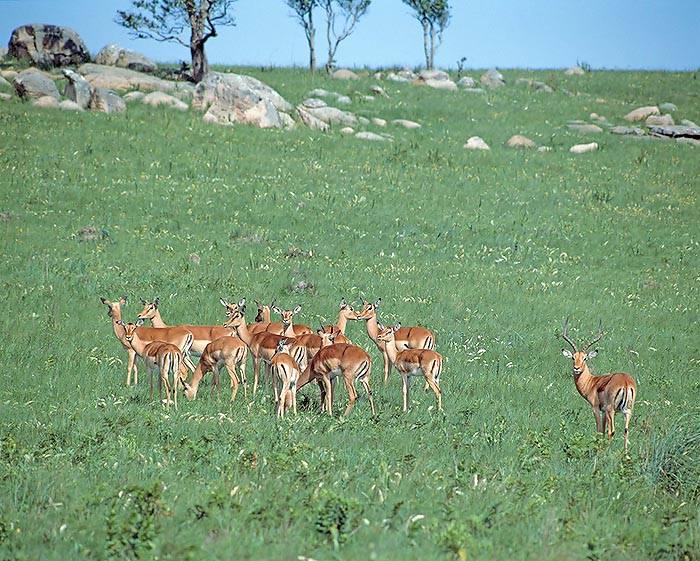 In the impala, and especially in the adult males, are present, in the frontal region and on the hind limbs, scent glands useful for marking the own territory.

The weight varies, in the male, from 55 to 80 kg and in the female from 40 to 55 kg, the height at the shoulder is of 75-90 cm in the male and of 70 cm, as an average, in the female. The horns, elegant and lyre-shaped, have nodes the amaZulu call amazinga, which however end in the apical zone, which is, on the contrary, smooth, and are carried only by the rams, with some exception: for instance, I met, time ago, a female equipped with hints of horns.

The impala belongs to the ruminants and is a grazer (herbivore tearing off or cutting the grasses from the soil) as well as a browser (animal which is grazing from the plants), with a preference to the first type of pasturage, also because it is an animal preferring open zones but with presence of thickets of vegetation or, even more, transition areas between the grassy expanses and the bush.

Considered as a plain animal, in reality it adapts very well to the hills and also to the mountain, provided with grassy zones alternated with bush, but with under wood absent or scarce.

It rarely gets far from the water, element from which it strongly depends, but when there are drought periods, it may compensate these with a greater consumption of succulent plants (see remark about the Tragelaphus strepsiceros). The grazing is decidedly preferred, especially when the grasses are green and abundant, however, once the rainy season is finished, it often shifts its preferences to the browsing, eating big amounts of leaflets, seeds and even berries.

The ability to use dicotyledonous and also monocotyledonous plants renders it rather sedentary, even in those habitats which have been deeply modified. 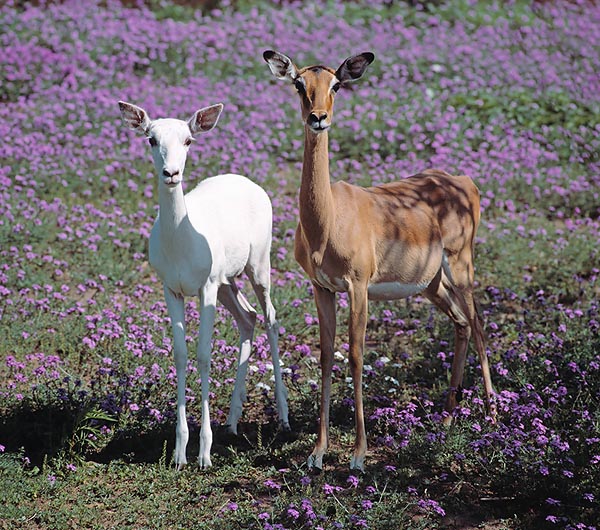 I have often observed such fact in anthropized areas where, both the bush-fires and the fire used by the natives for modifying the vegetation, have cleared the turf, favouring the growth of the bush, even thorny: in such zones many obliged grazers, for instance, gnus, zebras and hartebeests, go away, whilst the populations of impalas remain without too many problems.

The impalas are territorial, even if often with periods, as we shall see, sedentary and basically inclined to aggregate.

In southern Africa, the male becomes territorial during the reproduction time, which usually takes place by the end of the rainy season, but, once this period has gone, it becomes more apathetic and careless in guarding a territory.

I would draw a parallel with the deer, talking of “bellowing time”, because, among the African antelopes, the impala is the one which more vocalizes under the pressure of the reproduction instinct.

The adult males, and especially the “dominant” ones, engage in noisy vocal performances, but, oddly, also during this time they pass from the strenuous defence of a territory to the most complete apathy, but then to remember that they have to impose themselves. For this reason there were, initially, differences of ideas about their territoriality. The cry emitted by the male in heat, may be heard 2-3 km far away: the animal emits, the mouth shut, a series of puffs, usually from one to five, similar to noisy snorts, followed by a longer series of deep moos which may look roars, and such sounds are emitted, like for the deer, with the mouth wide open. During this “singing”, the tail raises slowly, almost to accompany the emission of the bellow.

Outside the breeding season, the males prefer thicker vegetation than the females, to whose groups at times they associate, but this is loose and transient.

Even if endowed of glands for marking, these glands have a lesser importance in the territoriality than what happens for the other species, whilst it is mainly the “body language” to express dominancy or submission: the imposition is usually tried assuming a stiff posture, with the legs extended, in order to increase the body height, and placing on the side in order to appear bigger, whilst raised tail and proceeding with small and agile martial steps signal that the animal feels to be above any challenger.

Black striae on the tail and the upper part of the thighs © G. Mazza

Also the “toilets” are of great importance in the territoriality: usually the faeces, shaped like pellets or chestnuts, are laid in huge quantity on open spaces, forming dark dots visible from far away.

Unlike the males, the females and the young utilize such toilets, without a precise meaning, all over the year.

Gregarious animals, however the groups of young and females are variable and are not strongly binding, may vary from three heads to more than one hundred, and the great herds are often formed by the volatile association of more groups or clans.

Also the links between mothers and cubs become soon tenuous and the females soon lose interest of young individuals, which eventually join up in small groups, also tenuous and volatile.

The impala, if not disturbed, is a mainly diurnal animal, and the daily routine begins with the first grazing, as morning breakfast, followed by a resting time, usually sheltered from the direct sun, of which the animal takes advantage for ruminating.

Once the warmest hours of the day have been spent in the shade, the impalas get out, between 4 and 6 p.m., for the dinner, and then go again under shelter to ruminate till when the darkness comes.

This is a delicate and dangerous time, due to the predators and the senses of the antelopes keep absolutely vigilant: the ears are in continuous movement and, behind the calm appearance there is a status of controlled alarm.

Also the sleep is characterized by the constant attention and the least noise or movement is sufficient for having them go from sleep to escape.

In zones with high presence of nocturnal predators, like ours, however, there is often a night activity, as the grazing in herd, in open areas, with several pairs of listening ears, offers less chance of falling under the claws of a leopard than the sleeping laid down in the bush, whilst, during day time, usually the activity of the leopard is more reduced and the rest is, consequently, safer. Thus, we may have a sort of inversion of the rhythm sleep-wake.

The defence from the smaller predators may even be active, especially for what the males are concerned, and I have seen a male keeping at bay, low horns, a too enterprising black-backed jackal.

Against the most powerful predators, developed senses, prudence, velocity and nimbleness form the only weapon available. However, it is a quite effective weapon: the leaps that can propel the antelope to three metres off the ground and 12 metres far, often breaking suddenly and in an unexpected manner a smooth ride, are intended to confuse the pursuer.

Many times I have enjoyed the acrobatic dance spectacle I had myself caused, getting close to the impalas in the bush: the start of the antelopes, the sudden leaps, also lateral, where often two individual cross while flying without colliding, seem a dance studied at the desktop and tried again and again, whilst, for them, it’s a natural fact as it is for us to climb one step.

Another acrobatics stands in the vertical landing after a leap, with the fore limbs in extension and the hind ones kicking to the sky.

The females may procreate already when one year old, the gestation is of about 180 days and the delivery takes place in the thicket, where the mother remains together with the new born for a couple of days, before reaching her companions.