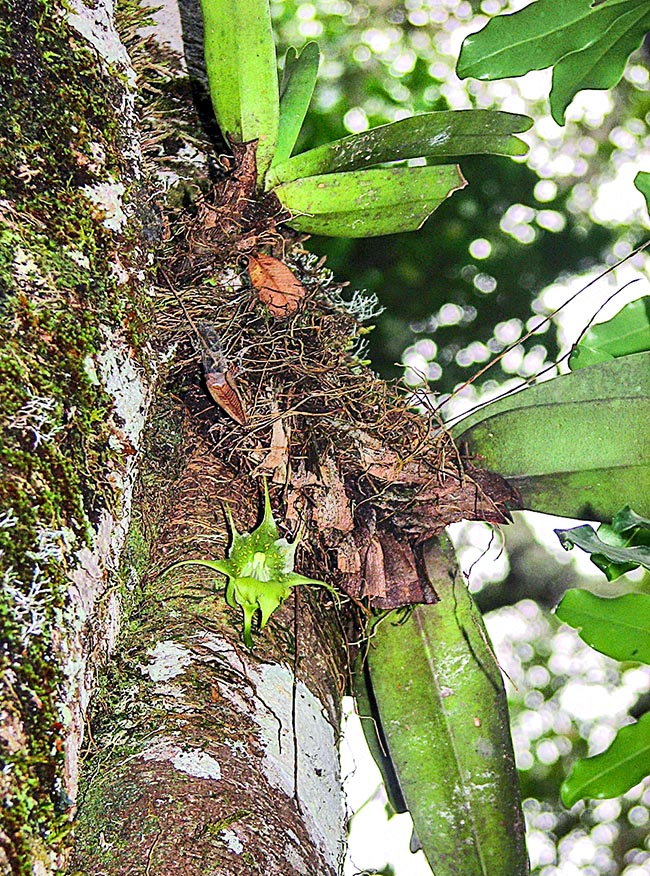 It is a species endemic to central-eastern Madagascar.

It grows in the humid moss forests, epiphyte on trunks of Philippia (= Erica) at altitudes between 700 and 1400 metres.

The name Aeranthes comes from the Greek words “ἀήρ” (aer) air, fog and “ἄνϑος” (ánthos) flower to mean “flower of fog” because they are plants that get their nourishment from the air of the humid sites of growth. The specific epithet comes from the Latin “ramosus”, ramified, and refers to the ramified inflorescence.

It was picked up in Madagascar by the Belgian collector G. Warpur (active from 1890 to 1901) who imported it in Europe where it was cultivated at the Royal Botanical Garden of Dublin and at the Jardin Botanique Saint-Gilles-Bruxelles.

As soon as it bloomed, it was described by Robert Allen Rolfe (1855-1921) and the name was validly published in the journal he founded, The Orchid Review in 1901.

It is known by the common name of Ramified Aerante.

It is an epiphytic plant, acaulescent (but in the very old specimens), usually with 5-9 leaves, 15 to 28 cm long and 2,2 to 6 cm broad, bilobed-obtuse at the extremity, coriaceous.

The inflorescences take form at the axil of the leaves and are pendulous and slender, 15 to 40 cm long, reflowering, with very thin, filiform, stems. They are racemes with few flowers (1 to 3) having 3-4 mm long bracts and sheaths much shorter than the internodes. The flowers, slightly perfumed, are translucent, of colour varying from ice green to medium green up to dark green.

The 3,5 petals are ovate-acuminate, arched downwards. The labellum, of colour variable from green to off-white colour, is auriculate at the base, widely obovate, 4 x 2 cm long. The spur is 1,5 cm long and dilated at the apex. The column is thick, auriculate at the base, 4 mm long. The pollinia are two each with one viscidium. The stigma is sticky with rostellum with lateral lobes longer than the medium one.

It has been proven that the plant blooms with a photoperiod varying during the year from 13 hours 13 minutes to 10 hours 47 minutes. 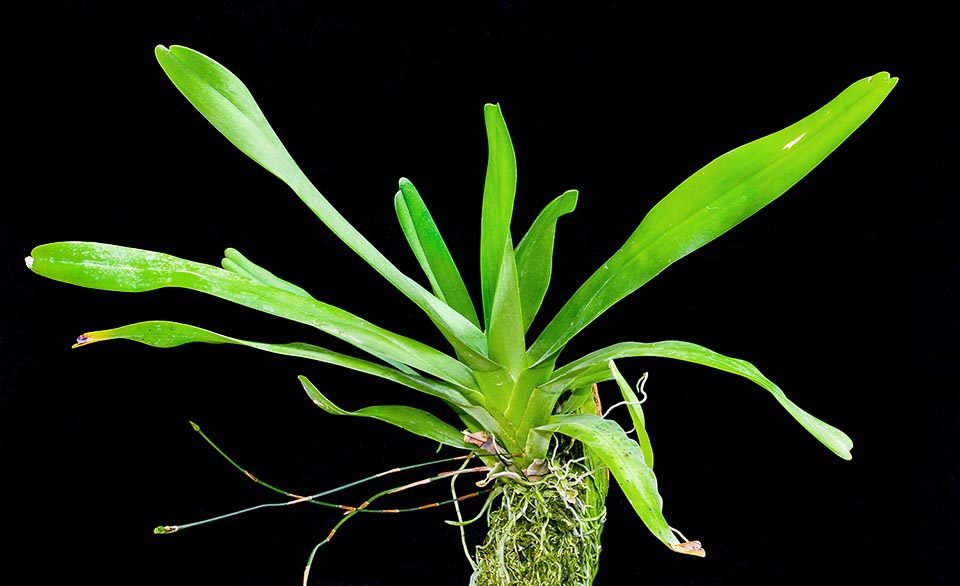 Acaulescent but in old specimens, has bilobed-obtuse leaves on the extremity. The inflorescences, at leaves axil, are hanging and slender, reflowering, with filiform stems © Giuseppe Mazza

In Madagascar the blooming takes place from December to February. The fruit is a fissured capsule that releases several small seeds.

In order to avoid uses incompatible with its survival, Aeranthes ramosa, is protected by the Washington Convention on the International Trade in Endangered Species of Wild Fauna and Flora (CITES), Appendix II.

Aeranthes ramosa is a very ornamental species thanks to the elegance of the flowers that have the look of an insect or of a spider. For its cultivation it is good to keep present that it lives in a subtropical climate humid during all seasons with very hot summers.

Moreover, as it requires low luminosity, the light must be filtered or diffused and the plants must not be exposed to the direct sun. Furthermore, as it lives in aerated sites, it is appropriate to guarantee a strong air movement at all times. 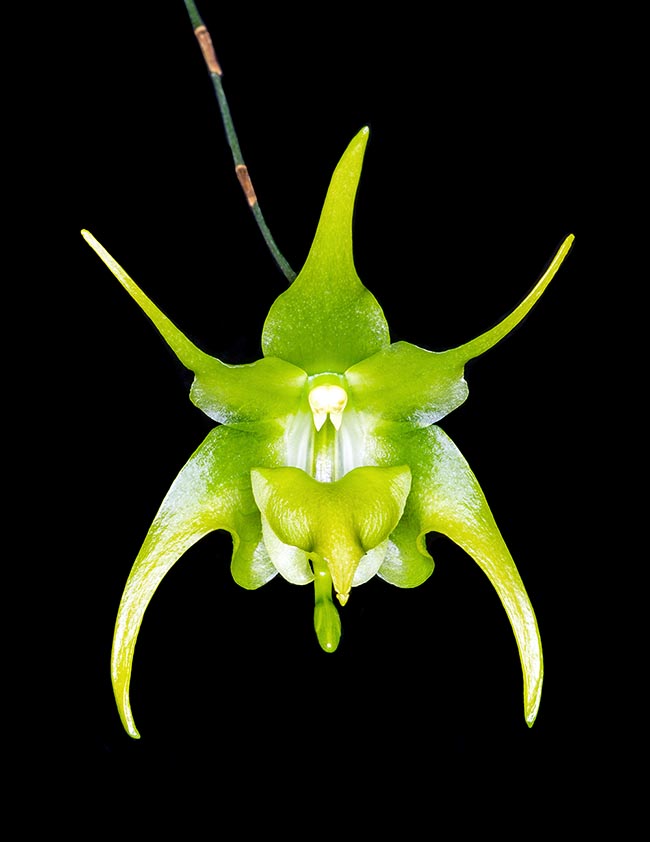 The flowers, like spiders, are green, lightly scented. The cultivation is not very easy © Giuseppe Mazza

The plants need a humidity of 75-80% for most of the year that may be lowered to about 65% for a short time in summer.

For the growth it is suggested to use not too deep and well-draining containers, or it can be mounted on hard and porous wood slabs (i.e. wood of tree ferns) partially covered with sphagnum in order to give a more natural appearance.

In any case, the plants mounted on rafts, seen their easy desiccation, require a high humidity, especially during the warm and dry season and consequently they could need several daily waterings with rain or demineralized water.

The plants must be fertilized with balanced fertilizer for orchids all year long (type 20-20-20), very diluted with water, at half the dosage suggested in the label.

From spring to mid-summer, it is a good practice to choose a formula with higher contents of nitrogen and then switch to phosphate in late summer and in autumn. Any excesses of fertilizer in the substratum can be eliminated by washing it with distilled water.

Not even in winter the substratum must dry completely. A nebulization can be done with a nebulization in the morning to grant enough humidity between the waterings that must be reduced. Also the fertilizations must be reduced or eliminated until the vegetative restart.

In the boreal hemisphere the blooming of Aeranthes ramosa occurs from late spring-early summer. As the plant blooms on the same stems for various years, the old flowers must not be removed until they come off on their own.

In case the plants begin to break the soil of the containers or overcome it, it is good to repot them and this operation is to be done when the new roots begin to form.