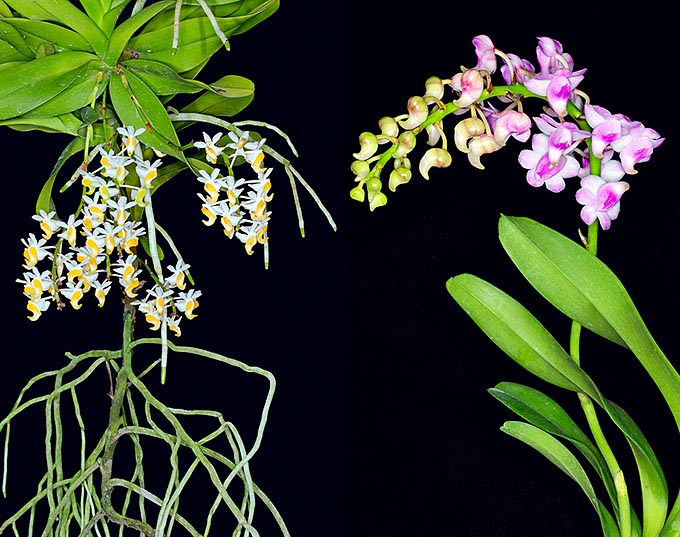 The species is native to Bhutan, China (Guangdong and Yunnan), India, Indonesia, Malaysia, Nepal, Philippines, Thailand and Vietnam where it grows as epiphyte in the forests on the more exposed branches, where it can get the maximum possible light, up to about 1200 metres of altitude.

The Aerides odorata Lour. (1790) is a monopodial much variable epiphytic species with up to 1 m long stems, ramified, tendentially drooping, and alternate linear, distichous, curved, fleshy, pale green, 15-25 cm long and 2-5 cm broad leaves. Hanging lateral racemose inflorescences, 20-35 cm long, carrying up to 30 close flowers of 1,5-3 cm of diameter of colour variable from the white, often with purple spots, to the purple and yellow at the apex spur. Dorsal sepal from oblong to elliptic, of about 1 cm of length and 0,8 cm of breadth, ovate lateral sepals, 1,2 cm long and 1 cm broad, oblong to elliptic petals, of about 1,2 cm of length and 0,6 cm of breadth, trilobed labellum forming at the apex a sort of a pointed sac shaped like a spur bent forward, about 1 cm long, with erect lateral lobes and median lobe folded upwards over the column.

It reproduces by seed, in vitro, and micropropagation; at amateur level may be reproduced at the vegetative restart by cutting the apex of the stem paying attention that the cut part and the remaining one are provided of leaves and of numerous aerial roots. The apical portion is to be put in a pot with aerated draining compost in a location with high humidity and temperature, 24-28 °C.

It is the most known species of the genus and the first to be introduced in cultivation, getting a lot of interest by the collectors of long lasting flowers, about two weeks, of waxy consistency and with pleasant perfume; it has originated several hybrids. 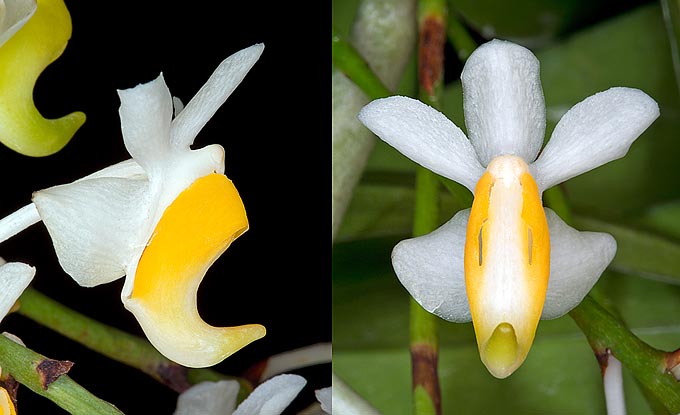 The very perfumed flowers can reach the 3 cm of diametre. The colour is much variable © Giuseppe Mazza

During the growing period it needs regular and abundant waterings and frequent nebulisations, even more times per day in presence of high temperatures, more spaced in winter, utilizing rainwater, demine- ralised or by reverse osmosis. The fertilizations, in spring summer, are to be done preferably with balanced hydrosoluble products, with micro- elements, at ½ – ¼ of the dosage suggested on the package.
It is preferably cultivated in suspended baskets, seen the habit of the plant, allowing the robust roots to grow freely out of the basket which is to be filled up with aerated and draining compost that may be formed by fragments of bark or by largely sliced coir. The repottings, when strictly necessary, are to be done by the vegetative restart disturbing the roots the least possible.