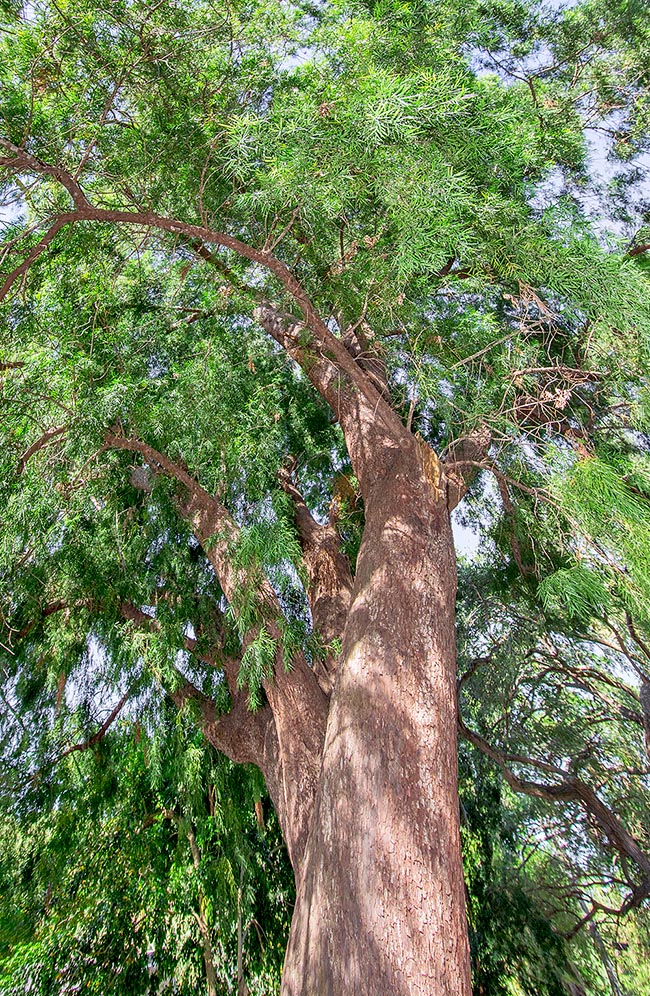 The species is native to tropical Africa (Ethiopia, Kenya, Sudan, Tanzania and Uganda) where it grows in the mountain rain forests between the 1500 and 2600 m of altitude.

The name of the genus comes from Podocarpus, genus diffused in Asia where the African species had been previously inserted and from which have been separated due to some particular morphological particulars and the number of chromosomes, replacing the first part of the name with “Afro”; the name of the species is the comparative of the Latin adjective “gracilis” = gracile, thin, with reference to the young buds, thinner than those of other species.

The Afrocarpus gracilior (Pilg.) C.N.Page (1988) is an evergreen dioecious tree with thick foliage and erect trunk, up to about 40 m tall and of 2 m of diameter in the old specimens in nature, with brown-reddish bark, smooth in the young plants, slightly wrinkly peeling off in flakes of irregular shape in the adult ones.

The leaves are simple, sessile or sub-sessile, usually arranged spirally, of lanceolate linear shape with acute or acuminate apex, entire margin and prominent central nervation, coriaceous, of green grey to glossy intense green color, 15-18 cm long and about 0,6 cm broad in the young plants, 2-6 cm long and 0,3-0-4 cm broad in the adult ones.

Sessile or sub-sessile axillar male cones, solitary or less frequently in groups of 2-4, cylindrical, 1,5-3,5 cm long and of 0,3-0,4 cm of diameter, with numerous microsporophylls (modified leaves that bear the pollen sacs) triangular of brown color, spirally arranged, bearing each one two pollen sacs.

Terminal female cones on a short branch, with one single fertile bract, preceded by some scales that when ripe wither and fall, main characteristic that has lead to the creation of the new genus Afrocarpus distinct from Podocarpus, where, conversely, they merge to form a receptacle that when ripe becomes fleshy. Ovoid seed, 1,2-1,8 cm long, covered by a thin fleshy layer, called “epimatium”, of glaucus to orange yellow color.

It reproduces by seed, previously cleaned from the fleshy layer, in draining organic loam maintained constantly humid, with germination times, if fresh, of 2-3 months, otherwise the times get remarkably longer, unless to break the hard tegument that wraps the seed; it can propagate also by cutting of terminal branches to obtain plants with vertical posture. 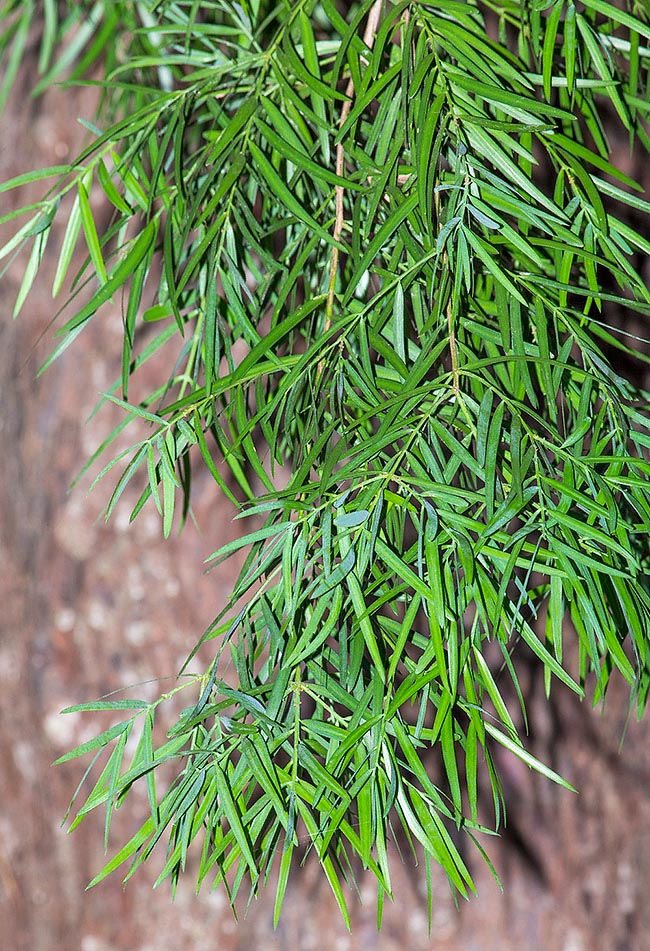 Very ornamental dioecious species due to the dense and delicate foliage. The seeds and the bark have medicinal virtues © Giuseppe Mazza

Very appreciated species as ornamental thanks to the thick and delicate foliage, the relatively fast growth, the ease of cultivation and the good resistance to parasites and diseases, utilizable as isolated specimen, for fences, even windbreak, and as road tree, keeping in mind in its collocation of the size it can reach and of the rather invasive radical apparatus.

The ideal climate is the humid subtropical one, but grows well also in the milder warm temperate climates, like that of southern California, where it is particularly diffused; as resistance to low temperatures are reported lowest values, exceptional and short lasting, around the -4 °C.

It requires full sun, for a more compact posture, or slight shade, and may grow in an ample variety of soils, preferably acidic to neutral, perfectly draining, and when adult can resist short dry periods, furthermore bears the pruning and consequently can be easily shaped.

The young plants can be cultivated in pot for the decoration of luminous environments.

The wood, commercially called “podo”, of yellowish color and rather light (density around 500 kg/m3), displays good mechanical, physical and workability characteristics, and is employed locally for multiple uses and is partially exported.

The bark contains tannins and is utilized in the tanning of hides.

The seeds and the bark are variously utilized in the traditional medicine for various pathologies.

In the countries of origin is often utilized in the control of the erosion and in the reforestation of degraded areas.

Finally, the seeds, with their superficial fleshy layer, are an important source of food for the local fauna that contributes to their dispersion and facilitates the germination damaging the hard tegument during the transit in the digestive system.