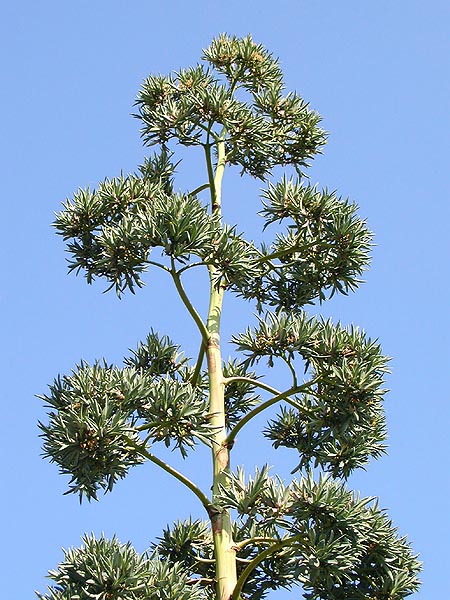 The Agave sisalana Perrine (1838) is native to the semi-arid regions of Mexico (Chiapas).

The name of the genus comes from the Greek “agaué”, feminine of “agauos” = noble, splendid; the name of the species comes from Sisal, Yucatan seaport from where the fibre obtained from its leaves was exported.

Monocarpic (it blooms only once and then dies) succulent, formed by one rosette of about one hundred lanceolate, rigid, leaves of a green-blue colour, long up to even more than 1,5 m and 10-15 cm wide, usually with smooth margins, ending with a robust woody brown thorn; the plant forms a short stem which can reach a height of 1-1,5 m.

The plant blooms when 8-10 years old, producing a terminal panicle inflorescence, tall up to about 5 m, with greyish yellow flowers, tubular, about 6 cm long and with a rather unpleasant smell.

The fruits do not complete their growth, but very rare instances, and it is thought this can be a hybrid or a mutation. After the fall of the flowers, at the base of the floral peduncle, some bulbils come out and root as soon as they touch the ground.

It easily reproduces by bulbils or by basal suckers.

Plant cultivated in Mexico since the prehistory in order to get fibre from the leaves, it holds a remarkable economic importance, in spite of the ever increasing utilization of artificial fires, occupying in the world production, mostly concentrated in Brazil, the second rank, between the natural fibres, after the cotton.

The characteristics of endurance, toughness and flexibility of the fibre obtained from the Agave sisalana, render it ideal for the production of cordages, packaging articles, reinforcements in plastic articles, handicrafts, etc. The tailings are utilized as a supplement in animal feeding.

Only the sunny locations with tropical and dry subtropical climate, where it grows well even in poor and sandy soils, are suitable for its industrial cultivation.

The striped varieties are preferred as decoration plants, and it can be cultivated, always in full sun, also in the warm-temperate zones, as it stands, for a short time, temperatures of about -6 °C, but with damage to the leaves already when same reach the -4 °C.