The Small tortoiseshell (Aglais urticae Linnaeus 1758, by other authors, not quite correctly called Nymphalis urticae) is a diurnal lepidopter afferent to the rich family of the Nymphalids (Nymphalidae).

It is cosmopolitan, like all members of the nymphalids, up to the circumpolar belts. It is found in the plains, as well as in the mountains up to high altitudes. Indeed, in Europe, Italy included, from the last ten years it has become quite rare, whilst it is found in the temperate areas of the other continents. The causes of this European micro-extinction are unknown. 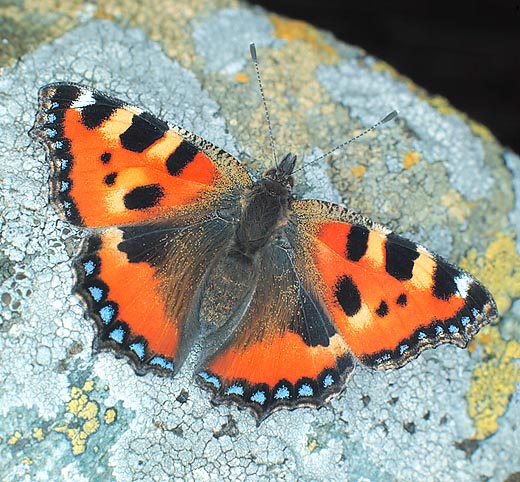 As the name implies, the eruciform, polypod, cephalic, larva of this lepidopter nourishes, electively, of nettle, a perennial herbaceous plant, for instance, the Urtica dioica.  For such reason, it is found in the plains and also in the thicket, up to the mountain pastures. The imago is, like for all other butterflies, nectarivorous.

It has the same general characteristics of the family of the Nimphalydae (see text of the Inachis io, the European Peacock). In the specific, for what the livery is concerned, we may say that also this butterfly is endowed of coloured and much elegant wings. The background colour is orange and along the fore edge of the wings of the first pair, we may observe three great alternate yellow and black dots. Another black dot coupled to a yellow one, is then noted at the centre of the fore wings, whilst both pairs of wings have a sub-marginal black belt, which includes several blue small dots. Males and females are identical, with a wingspan of about 5 cm.

The name of the genus Aglais, comes from Aglaia, or from the old Greek Aglea, which means splendour, one of the three Graces or “Gratiae” in the Roman mythology, coming, in reality, from a mythological figure of the old Greece, the Charites: wonderful girls who were spreading the joy of the nature n the heart and the spirit of the gods and of the mortals.

This lepidopter is characterized by one to three generations per year, which means it reproduces from one to three times. The first generation caterpillars come to life in May from the eggs laid in March-April, on the nettle leaves, its nourishing plant. The second generation ones, between July and August. The third generation has been observed only in France in the Loire region.

The larva is almost fully black, covered by hairs, similar to that of the Inachis io. The chrysalis has a gold-yellowish colour. The imago flies from February till October. In Europe, the IUCN considers this species as endangered, what is not the case in other continental areas.