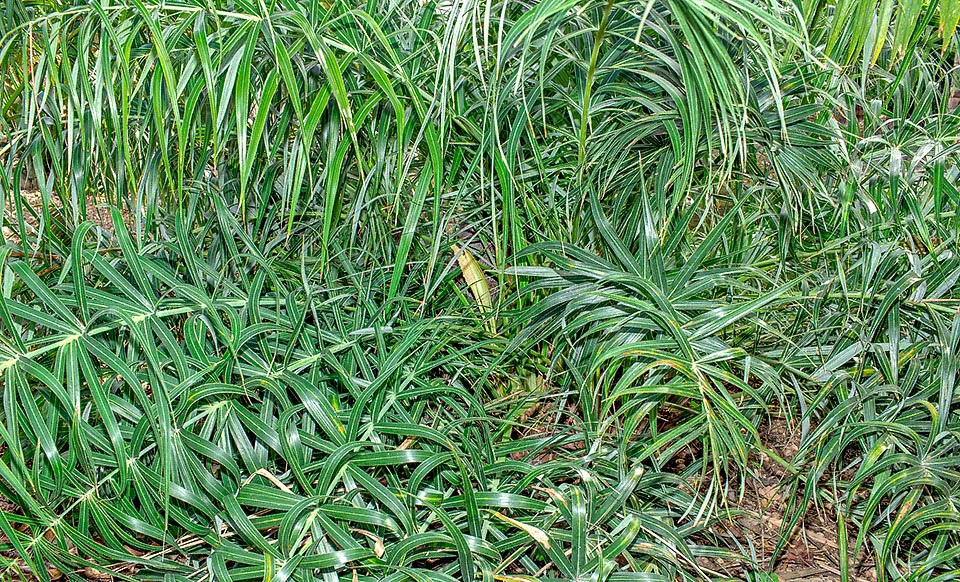 Native to Brazil Allagoptera arenaria grows on the dunes close to the sea or in the thicket behind. Can be 2 m tall with horizontal underground stem © Giuseppe Mazza

The species is native to Brazil (Bahia, Espirito Santo, Paraná, Rio de Janeiro, São Paulo and Sergipe) where it lives along the coasts on the dunes close to the sea or in the thicket behind (“restinga”) on sandy soils, often forming dense colonies and fulfilling the important rôle of erosion control.

The name of the genus is the combination of the Greek substantives “ἀλλαγή” (allagé) = change, mutation and “πτερόν” (pterón) = wing, with reference to the leaflets arranged in various directions on the rachis; the name of the species is the Latin adjective “arenarius, a, um” = sandy, with obvious reference.

The Allagoptera arenaria (Gomes) Kuntze (1891) is an unarmed monoecious species, up to about 2 m tall, with short horizontal underground stem, solitary or at times biforked, rarely emerging up to about 1 m of height, of 10-12 cm of diameter. 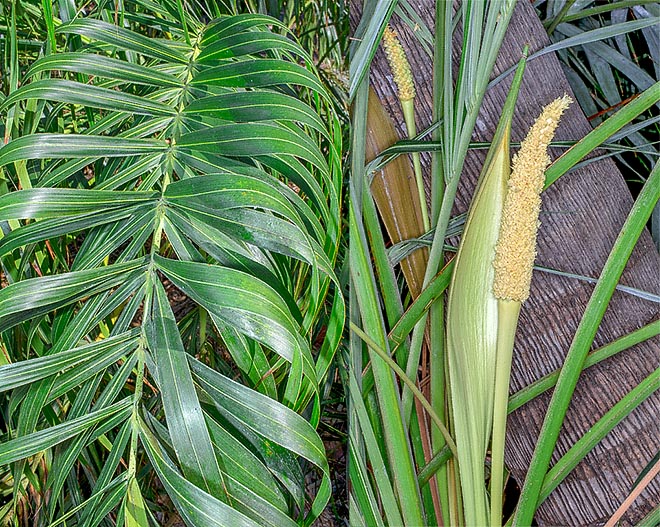 Detail of a pinnate leaf, elegantly arcuate, that may touch 2 m of length with lanceolate leaflets and of the inflorescence. With dense colonies, this palm often plays an important rôle in erosion control © Giuseppe Mazza

The leaves are pinnate, elegantly arcuate, 1-1,8 m long, with 35-50 pairs of lanceolate leaflets with acute or bilobed apex, 30-48 cm long in the central part and 1,2-2 cm broad, arranged on both sides of the rachis in groups of 1-4, spaced of 2-3 cm, and directed in various directions, coriaceous, of glossy dark green colour above, covered by a grey-light blue waxy patina below and prominent above central vein.

Inflorescences, on 50-70 cm long robust peduncle, between the leaves (interfoliar), erect, spiciform, compact, 15-18 cm long, initially protected by a woody tubular bract, with unisexual yellow-greenish flowers, fragrant, ararnged in the first half in triads (one female flower between two male), whilst in the remaining part are present only male flowers in couple. Male flowers, on a long rather flat long pedicel, with 6-18 stamina, female sessile flowers with trilocular ovoid gynaeceum; the male flowers ripe (and fall) 8-9 days before the female ones (proterandry), this favours the crossed fecundation. Obovoid fruits, angular for mutual pressure, of yellowish green colour, 1,2-2,3 cm long and of 1-1,6 cm of diameter, usually containing only one obovoid seed about 1,7 cm long and of 1,4 cm of diameter.

It reproduces by seed, that has a long lasting germinability, previously kept in water for 3 days, in sandy loam maintained humid at the temperature of 26-28 °C, with germination times of 2-5 months and quite slow initial growth. It can also be propagated by division of tufted plants.

Besides being one of the most ornamental acaulescent palms, it also stands among the most resistant and adaptable to markedly different cultivation conditions, despite being original to humid tropical zones it grows well also in those with temperate warm climate , where it can bear without damage temperatures up to about -4 °C, provided exceptional and short lasting, and little less with damage to the aerial part. It prefers the full sun, but adapts to partially shady situations, and is not absolutely particular about the soil, even if poor, provided draining. 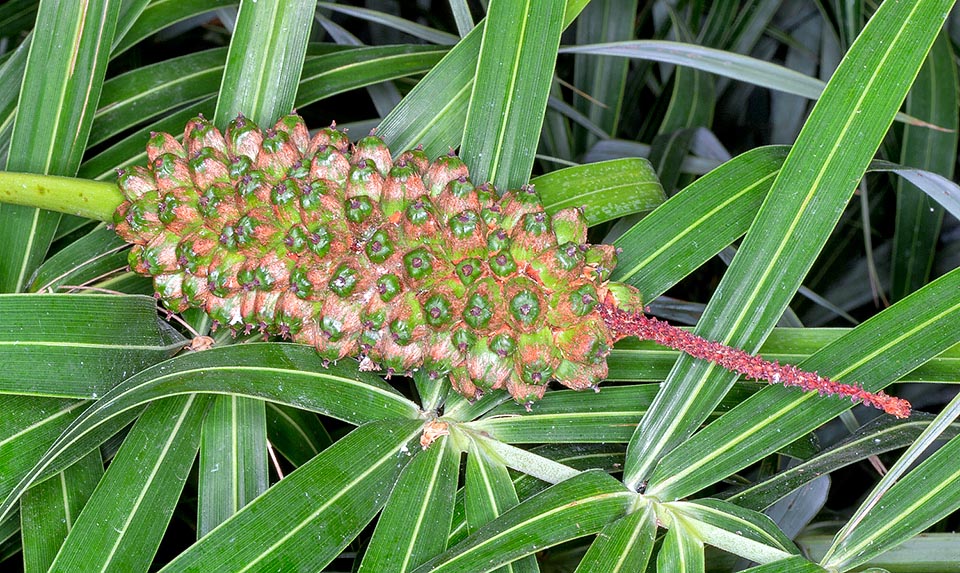 The fruits are obovoid, angular due to mutual pressure; they are in important source of food for frugivorous fauna that disperses the seeds © Giuseppe Mazza

It resists the salinity of the soil and the marine aerosols, hence can be utilized in gardens close to the sea, but also in desert type gardens, as it bears well periods of drought as well, even if takes advantage, for a faster growth, from regular waterings in the climates with long dry periods; for the same purpose are useful the fertilizations with slow releasing balanced products. The fruit is edible, with orange pulp, fibrous, aromatic, of taste between sweet and sour, consumed fresh or under form of juice or jam.

Pioneer species of remarkable ecological importance for the sunny coastal dune areas (restinga) of Brazil, creating with its foliage a cooler microclimate, humid and shady and furnishing with its residues organic matter, that, together, favour the settlement of other species less tolerant of the intense heat and of the poverty of the soil; the fruits represent also an important source of food for the frugivorous fauna, that in turn contributes to the dispersion of the seeds.