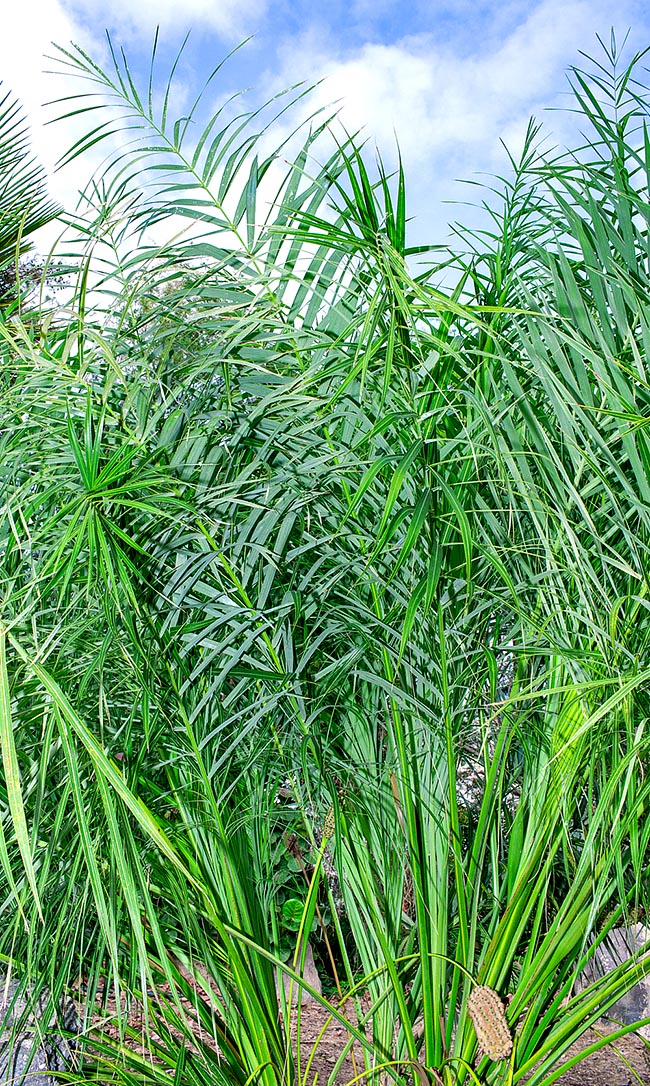 Native to South America, the Allagoptera leucocalyx is a rather variable unarmed monoecious species. It can be 2 m tall with short horizontal underground stem, at times biforked, rarely emerging © Giuseppe Mazza

The species is native to Argentina (Misiones), Bolivia, Brazil (Bahia, Goiás; Mato Grosso, Mato grosso do Sul, Minas Gerais, Pará, Paraná, Rio de Janeiro and São Paulo) and Paraguay where it lives in open semiarid areas, often on the borders of water streams, on rocky or sandy soils between 200 and 1000 m of altitude.

The name of the genus is the combination of the Grek substantives “ἀλλαγή” (allagé) = change, mutation and “πτερόν” (pterón) = wing, with reference to the leaflets arranged on the rachis in various directions; the name of the species is the combination of the Greek adjective “λευκός” = white and of the substantive “κάλυξ” (calyx) = calyx, with reference to the white papillae on the sepals.

The Allagoptera leucocalyx (Drude) Kuntze (1891) is a rather variable unarmed monoecious species, up to about 2 m tall, with short underground horizontal stem, solitary or at times biforked, rarely emerging up to about 2 m of height, of 10-12 cm of diameter. The leaves are pinnate, 0,8-2 m long, with 40-70 couples of linear-lanceolate with acute or asymmetrically bifid apex, 30-50 cm long in the central part and 1-2 cm broad, arranged on both sides of the rachis in groups of 1-5, spaced 3-6 cm. The leaflets are quite rigid and directed in various directions, coriaceous, of glossy dark grey green colour above, covered by a pale blue grey waxy patina below and prominent central vein above, depressed below and provided of ramenta (tiny elongated brown scales). Inflorescences between the leaves (interfoliar), on a 0,5-1 m long peduncle, erect, spiciform, compact, 5-18 cm long, initially protected by a woody tubular bract with apiculate apex, of pale green colour outside, pale brown inside. Yellow-cream unisexual flowers, fragrant, arranged in the lower mid in triads (one female flower between two male), whilst in the remaining part are present only male flowers in pair. Pedicellate male flowers with sepals united at the base and margins provided of whitish papillae, free petals with entire margin and 6-11 stamina, sessile female flowers with free sepals and petals, slightly papillose margins and trilocular ovoid gynaeceum; the male flowers ripe before the female ones (proterandry), this favours the crossed fecundation. Obovoid fruits, angular due to mutual pressure, of green to orange yellow colour and covered at the apex by pale brown tomentum, 1,5-3,5 cm long and of 1,3-1,8 cm of diameter, usually containing only one obovoid seed about 1,7 cm long and of 1,4 cm of diameter.

It reproduces by seed previously kept in water for 3 days, in sandy loam maintained humid at the temperature of 26-28 °C, with germination times starting from one month. It may be also propagated by division of tufted plants. 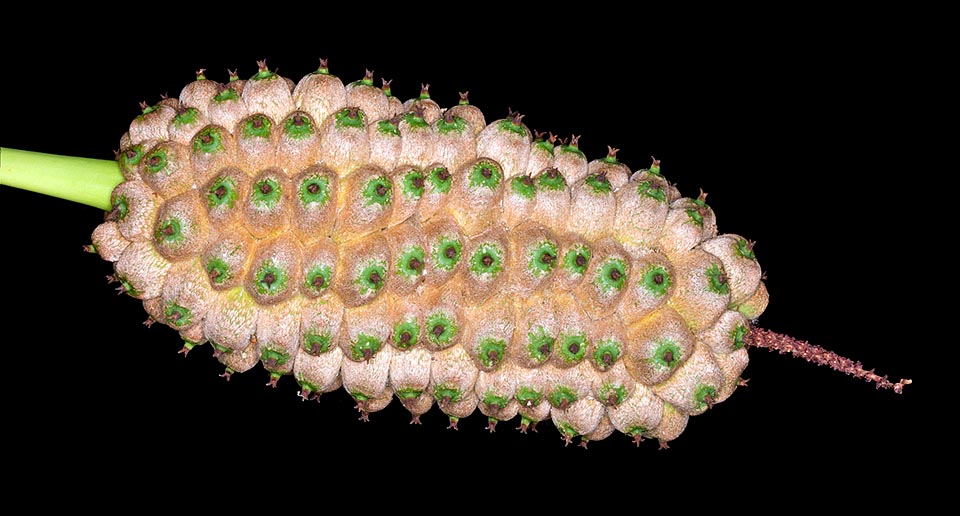 The obovoid fruits, angular due to mutual pressure in the infructescence, are edible. The juice of the sprouts is used in the ear and digestive system diseases © G. Mazza

Diffused in the origin sites, but almost unknown elsewhere, of similar look of the better known Allagoptera arenaria, is cultivable in full sun in the tropical, subtropical and milder warm temperate climate regions, where it appears to have the same characteristics of resistance to the low temperatures and the drought and of adaptability to different types of soils, even poor. The fruit, having a yellow fibrous pulp, is edible and is usually consumed fresh, and is also an important source of food for the local fauna that contributes to the dispersion of the seeds. The leaves are utilized to fabricate brooms, purses, mats, hats, tools and other craft items, whilst the juice gotten from the young sprouts is used in the traditional medicine for treating ear and digestive system diseases.