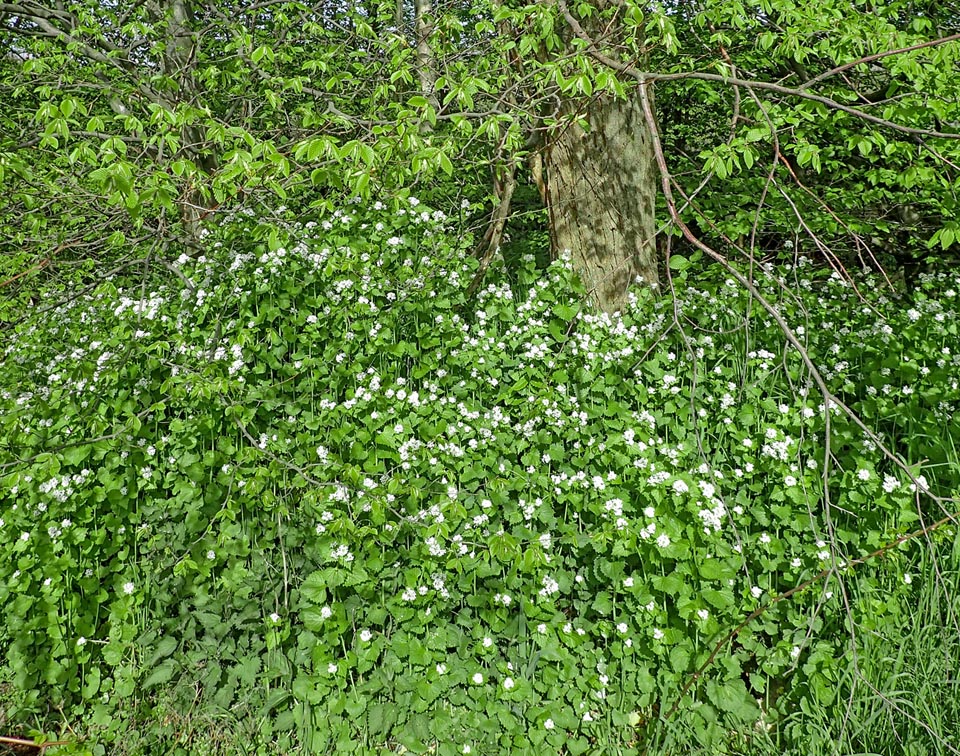 Native to Europe, west and central Asia and north-west Africa, Alliaria petiolata grows at the margin of the woods and in shady sites, from sea level up to 1700 m of altitude © Jean Louis Verbruggen

It has been introduced in North America as a culinary plant in 1860 but it has escaped cultivation and soon has naturalized becoming a cosmopolitan invasive species. 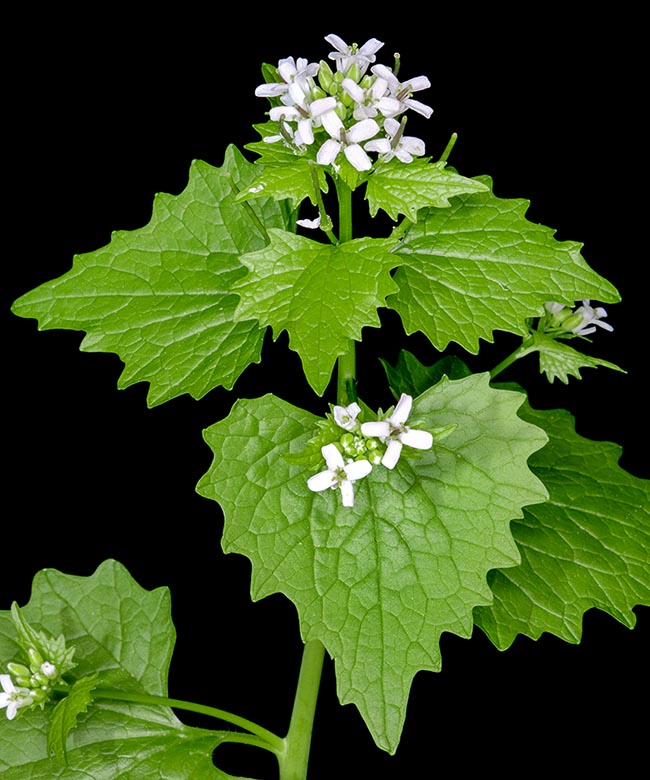 Basal round or heart-shaped leaves, 10-15 cm long and 5-9 cm broad. The 3-8 cm long and gradually smaller, cauline leaves towards the top of the plant, are alternate, rhombic, briefly petiolate and edged of sharp teeth © G. Mazza

It lives in humid hedges, in the margins of the woods in other shady places, marginal at times, on clayey fertile soil, from the marine zones up to 1700 m of altitude.

The name of the genus gets its name from the odour and the taste of garlic the plant emanates if wrinkled. The specific epithet refers to the long petiole of its leaves.

It is a biennial herbaceous plant, up to 30-80 cm tall, with erect stem, pubescent, simple or ramified on top.

The basal leaves, with 1-3 cm petiole, are round or heart-shaped, 10-15 cm long and 5-9 cm broad, coarsely toothed, that wither at the time of blooming.

The cauline leaves are alternate, rhomboid, briefly petiolate and edged of sharp teeth, of averagely 3-8 mm, that gradually reduce in size at the summit.

Blooming takes place upon the second year, in spring, and every plant usually produces one single, not or little ramified, stem.

The inflorescence is a terminal corymb, occasionally axillar, that lengthens at the fruitification time.

The fruits have 2,5 mm greenish sepals with lateral couple with non-saccate base and white, 2×5-5 mm, cruciform petals, oblanceolate, with claw differentiated by the lamina.

The stamens are 6, lightly tetradynamous, with about 2-4 mm long filaments. The anthers are oblong with obtuse apex, about 0,6-1 mm long. The ovary is superior, bicarpellate, syncarpic with many ovules, having a short persistent style and simple or bifid stigma. Pollination is done by butterflies and bees.

The fruits are erect or erect-patent siliques, linear, 4-6 cm long with sub-tetragonal section carried by enlarged peduncles. The siliques, initially green turn grey-brown when ripe and carrying inside two rows of glossy black seeds, not mucilaginous if wet, longitudinally striated that are released in mid-summer. 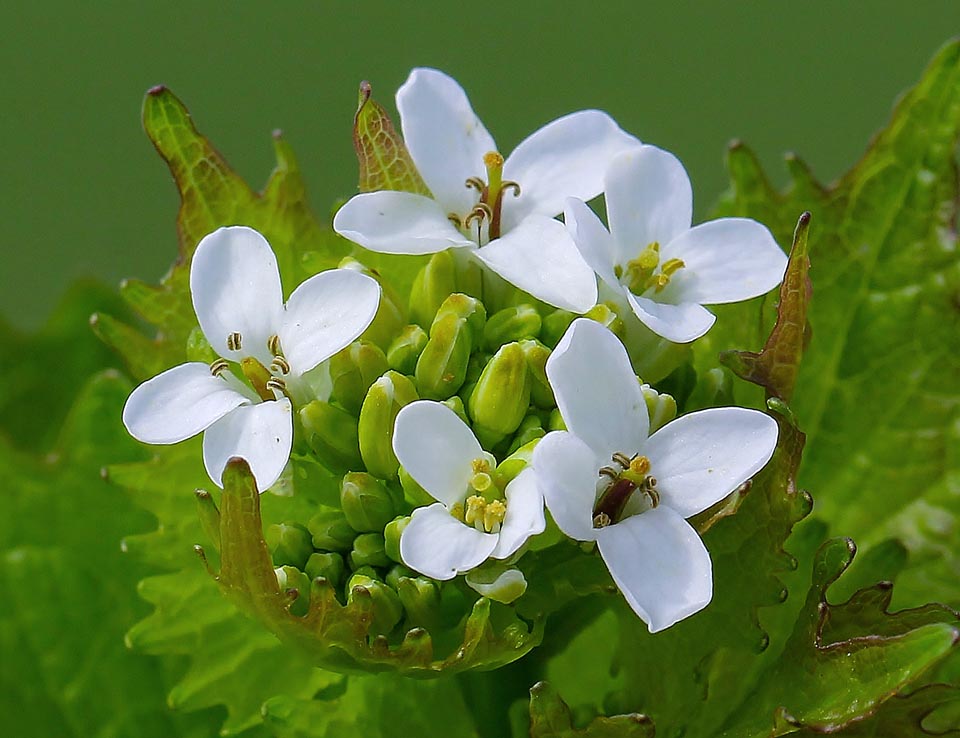 The rich blooming happens on the second year in spring and each plant usually produces one single stem. Pollination is entrusted to butterflied and bees © Richard Collier

A single plant may produce hundreds of seeds that disperse far away from the mother plant.

The young leaves are widely utilized in the kitchen in lieu of the garlic, but are more digestible, and are added to salads, soups, to roasts fillings and to many other culinary preparations. In Great Britain they are used to flavour sandwiches.

The seeds, thanks to the essential oil similar to that of the mustard, are utilized to flavour the dishes and the appetizers thanks to their capacity of stimulating the appetite. 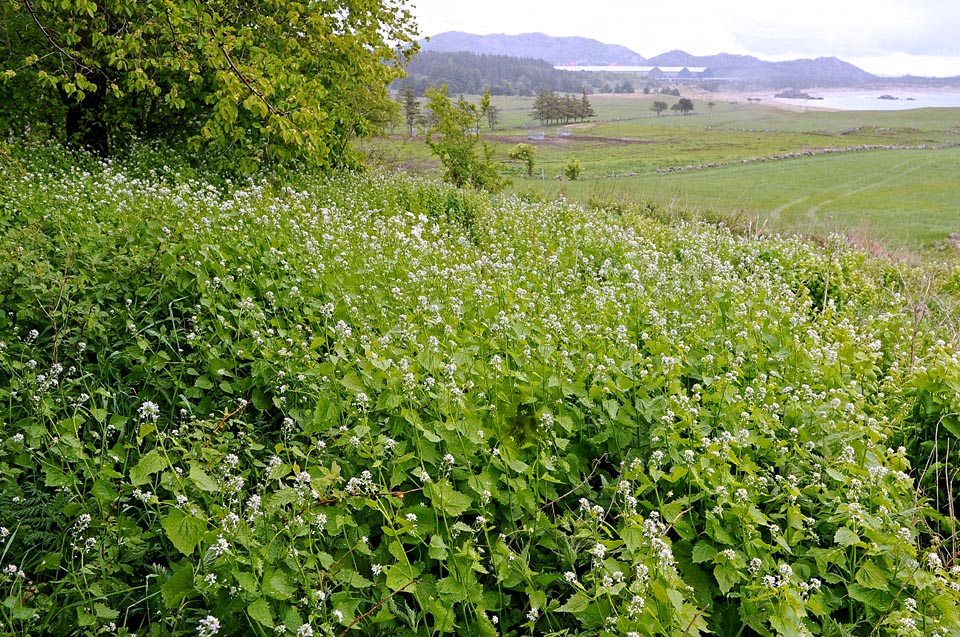 Grown for its medicinal properties and used in kitchen in lieu of garlic, it’s now a cosmopolitan species, often invasive in the anthropized areas © Per Arvid Åsen

Moreover, the plant has medicinal properties. It is used as antiseptic, disinfectant, diuretic in the bronchial complications, in the ulcers and in the cut injuries. The leaves contain vitamin A and vitamin C.