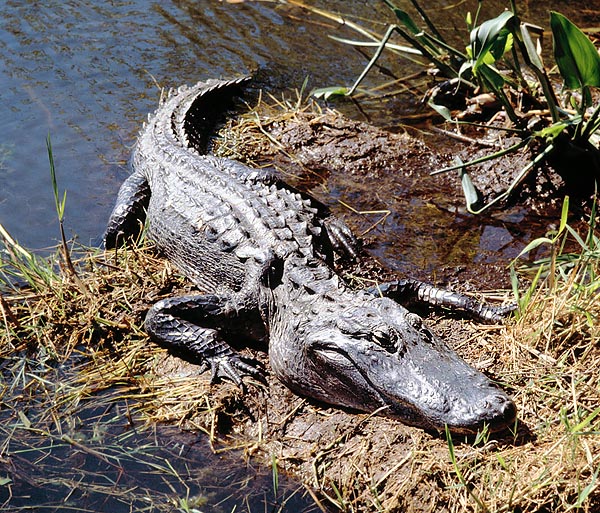 A Florida Alligator mississippiensis in its habitat © Giuseppe Mazza

The Mississippi alligator or American alligator (Alligator mississippiensis Daudin, 1802) is a huge reptilian afferent to the subfamily of the Alligatorinae.

Taxonomically, it is more precisely afferent to the class of Reptilia, subclass  Archosauria, order Crocodylia, family Crocodylidae, whilst after other authors it’s that of the Alligatoridae, and subfamily Alligatorinae, genus Alligator.

The appearance of this reptilian, as the fossi- liferous remains relate, as well as for the other members of the order of the Crocodylia, happens during the Mesozoic or Secondary Era, starting from the upper Cretacic or upper Cretaceous, about 99 million of years ago. The Mesozoic era is that of the maximum heyday of the dinosaurs, of which these repti- lians have been contemporaries, descending from the most archaic forms of dinosaurs, possibly terrestrial or, perhaps, also arboreal (for the palaeontology, please refer to the text Crocodylia).

Many biologists, when reconstructing the natural history of the group, rightly think that it’s the birds, rather than the other reptilians, to be the closest relatives to the present crocodiles.

The Mississippi alligator is autochthonous to south-eastern USA, it is found particularly in Florida, Mississippi, Alabama, Louisiana, Oklahoma, Georgia, Texas, North and South Carolina, Arkansas, where these splendid reptilians were subjected until the sixties of the twentieth century to a pitiless hunting because their flesh is edible, or, better, quite tasty, resembling to that of the chicken, and for the commercial utilization of the skin in the western women’s fashion. 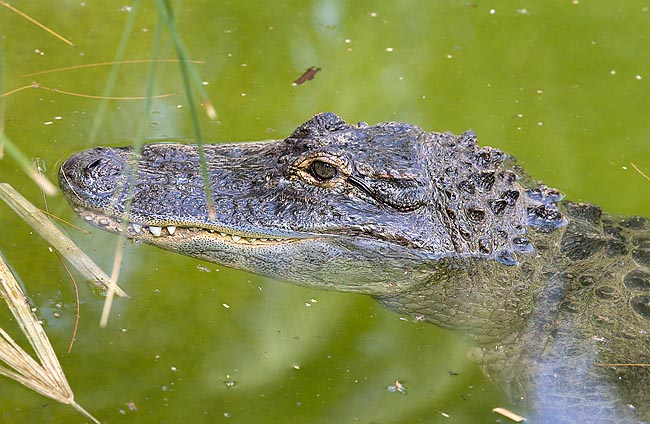 The snout is wide and flat. The teeth can't be seen when the mouth is shut © Giuseppe Mazza

Then, at a certain point of the sixties of the last century, the alarming decrease of the density of population of the Mississippi alligator, till near to the extinction, denounced by the zoological biologists, led the American government to enact a law rendering “illegal” the hunting of this animals.

Since that time, these reptilians met a new dawn, accompanied by a demo- graphic explosion, to the point that, nowadays, as it happens for the species of the estuarine alligators in Australia, the biologists must often take action for moving them to wild areas from urbanized zones or under urbanization.

Unluckily now the trade in USA of the meat of these reptilians has resumed at full speed, to the point that they produce alligator hamburgers.

This trade has stimulated the birth of “alligator farms”, where these animals are bred for this purpose.

However, among the 23 known species of crocodiles, distributed in the families of the Crocodylidae, Alligatoridae and Gavialidae, only that of the Alligator mississippiensis is not under risk of extinction. 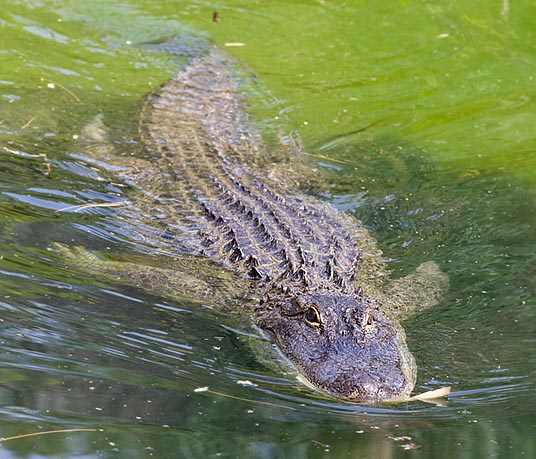 Even if possibly dangerous to man, incidents are quite rare © Giuseppe Mazza

It is at home in the fresh water swamps, in the lakes and the rivers, in the reeds wetlands and in the Mangroves; often the dark brown or dark green body is completely covered by algae and aquatic plants, thus allowing its mimicry.

This renders it distinguishable also from the American crocodile (Crocodylus acutus), living in southern Florida and that is darker than the alligator and has a more streamlined snout.

The specimens of Alligator mississippiensis may have dimensions going from 2,8 to 5, even up to 6, metres, and reaching a weight of one ton. The males are always bigger than the females, which may reach the two metres at the maximum, when the sexual maturity is achieved. Only few cases of humans’ killings are reported (even if they have occurred) by the American alligator, in respect to the Nile crocodile which, on the contrary, enjoys of a much worse reputation. It is clear however, that a hungry male or a female protecting the own nest, may, as it has happened in some circumstances, kill even a man. 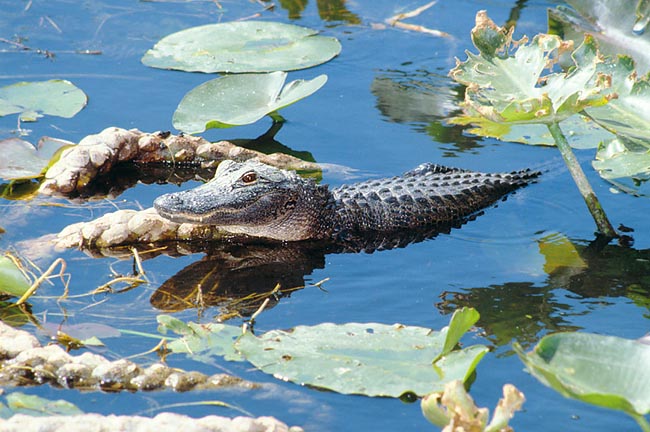 The young of Mississippi alligator are black, with yellow transversal bands, but when they grow up, yellow decorations are completely overshadowed by the black pigment and the algae.

When adult, it has a much robust tail, which is utilized as swimming propeller and the hind feet are webbed. Compared to the Nile crocodile, the bony crests are less evident, especially on the back of the tail.

Like all other crocodiles, also the alligator, having a thick skin covered by osteoderms, therefore not able to transpire, when it is basking on the bank it opens the mouth for expelling the heat in excess. Being a reptilian, it is obviously an ectothermous poikilothermous eurithermous. It eats fishes, reptilians, birds and mammals, even big, such as stags.

During the reproductive time, by early summer, the big males emit low roars, called “bellows”, in order to attract the partner, bending the body in a concave position and pushing out from the water the head and the tail. 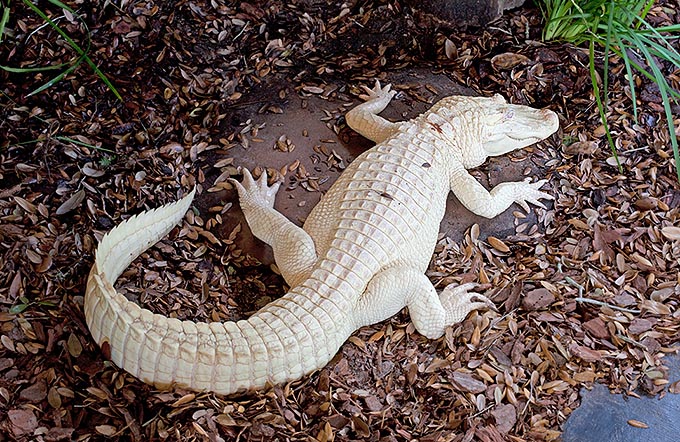 While roaring or bellowing, by means of the vibration of the scales on the back, they emit small jets of water upwards.

The mating happens in water.

Then, the females lay the eggs, in a number varying from 20 to 50, in heaps of vegetal debris, looking after them for the whole period of gestation, which lasts about 65 days.

Little before the hatching, the young emit a synchronized call in order to arouse the mother’s attention.

As soon as the eggs are hatched, the mother, in fact, takes the newborn, about 20 centimetres long, in its mouth, for transporting them to the water, seen that otherwise they should be easy preys of serpents, carnivorous mammals, turtles and birds.

While in the water, and during some time, the mother will still survey them.

The young nourish of invertebrates, frogs and fishes. The IUCN considers this species as not endangered.

The alligators reproduce easily and by sure are not an endangered species. Their flesh, tasty, is edible and breeding centres have been formed © Giuseppe Mazza