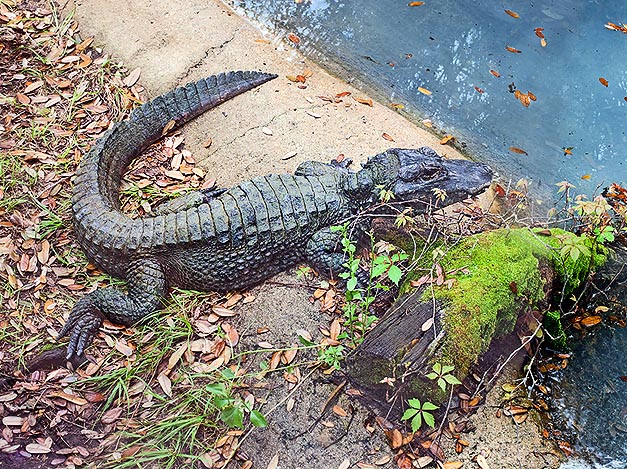 It is the only species of alligator in the Asian continent, cognate, palaeontologically, to the well known American alligator (Alligator mississippiensis), which, however, is much bigger than its Asian cousin.

Ethnologically, the legend avers that, for the celestial power, this reptilian became the “emblematic animal of the Emperor”, called “Son of Heaven”, but also “Dragon face”.

Supernatural animal, it symbolized the very function of the Emperor, namely that of ensuring the seasonal rhythms and the harmonious flow of the life. The Emperor, as a matter of fact, was the keeper of the order and of the prosperity of the universe.

Mythologically, in the Chinese culture, on the neck of the dragons was often represented a hanging pearl, reminding the radiance and the perfection of the Emperor’s words, the precision of his thought and the wisdom of the orders given by the universal Emperor. “Thou will never discuss or question the pearl of the dragon”, it was even repeating, in modern times, the dictator and revolutionary Mao Zedong (Mao Tse-tung, 1893-1976).

The biologists of the International Union for Conservation of Nature (IUCN), tell us that now the local status of this reptilian proves to be “endangered”. About the causes, which over the years have impoverished the nuclei and the population of the Chinese alligator, we do not have available trustworthy documents prior to the XVIII-XIX-XX centuries, but in this period they are by sure attributable to an intense poaching for the skins, the teeth and the consumption of the edible meats, not to forget the utilization of the organs or parts in the eastern medicine.

Still now, for instance, the ethno-biologists tell us that the liver of this species is utilized in the Chinese medicine, as a useful means against the poisonous intoxications, the purification of the lymphatic system and the chronic inflammatory diseases.

And starting from the XIX it’s always the man, with the construction of dams and weirs, to change the hydro geologic context of the regions where they do live: the modification of the course of parts of rivers or of their turns, it stands, in fact, surely at the origin of the reduction of the nuclei of entire populations of this fascinating alligator. 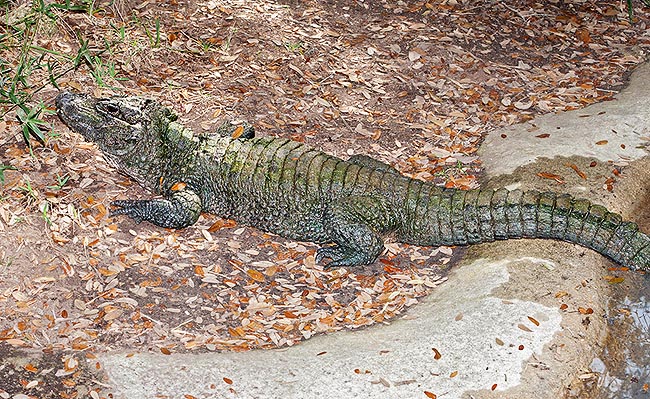 Its muzzle is short, upturned, and hibernates when it's cold © Giuseppe Mazza

It is a species endemic to eastern China, where in the past, till the beginning of the XX century, it occupied a much larger area than the present one.
Nowadays, this reptilian lives only in a restricted area, crossed by the Yangtze kiang river (as pronounced in English, the river Chang Jiang, which means the azure river), through the provinces of Jiangsu, Anhui and Zhejiang.

Geographically, the Yangtze kiang marks the boundary between northern and southern China.

Till 1970, the Chinese alligator was present also in the states of Ba and Shu, where it has presently vanished. The reasons, apart from poaching, are related by the biologists to the important phenomena of anthropization present, since the XIX century, in the People’s Republic of China.

For instance, the huge Three Gorges Dam for the production of hydroelectric energy, begun in 1976 and completed in 2006, has by sure contributed, along with other engineering works and hydraulic architectures, to the impoverishment of the biotopes of this alligator.

It lives in the lotic water streams, like, rightly, the waters of the Yangtze kiang, as well as in the swamps, lagoons and lakes associated to the same, that is in lentic waters.

Even though the region where it lives, included in the temperate-continental belt, is characterized by rigid winters, and the Chinese alligator is therefore more accustomed to the cold than the American one, it loves the heath, like all the crocodiles. It is found, therefore, in summer, sunbathing on the banks of rivers, lakes or swamps. And also for this alligator, keeping the mouth wide open while basking, contributes to its body thermoregulation. 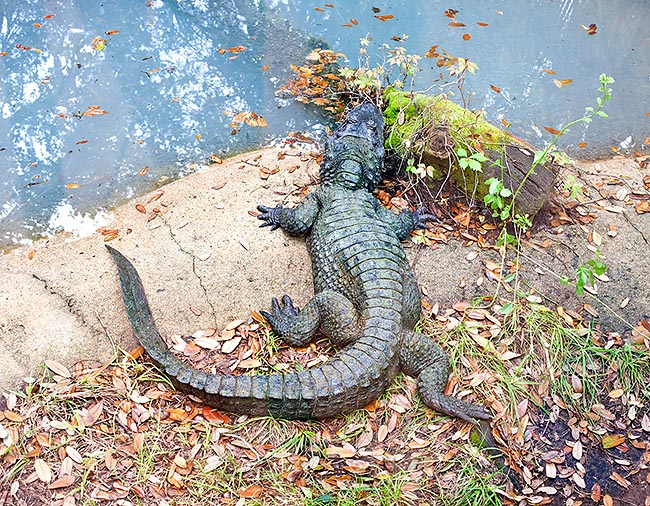 The forelegs have 5 toes, the hind 4; it was the emperor emblematic animal © Giuseppe Mazza

Indeed, it is good to remember that these reptilians are poikilothermic-eurithermic-ectothermic, commonly called cold-blooded animals.

After some Chinese biologists, during the rigid winters, these animals should hibernate in puddles of mud and water.

The Alligator sinensis is mainly active at night.

This close relative to the American alligator, has a length of about 2,10-2,30 m for the males and about 1,80 m for the females; males and females, apart the size, do not have any character of sexual dimorphism.

The livery of the adults is greenish black, with yellow spots and bands along the sides. The offspring, just born, have a brighter livery with yellow-black bands. The body is stocky and robust, with a powerful tail; the limbs are strong and allow it to walk on the earth, the hind limbs are endowed with four toes, and the fore ones have five of them.

The muzzle is short and upturned.

The Chinese alligator seems to hibernate, for the most part hidden, from October to April, whilst in spring, during the mating period, moves and it is easier to observe.

The pregnant female builds up a quite rudimentary nest on the banks of the aquatic location where it lives, and lays there from 10 to 40 white eggs, which hatch after about 60 days. Throughout this period, it keeps close and stands guard at the nest.

Though not dangerous to man, if disturbed, also the Chinese alligator does not hesitate in biting.