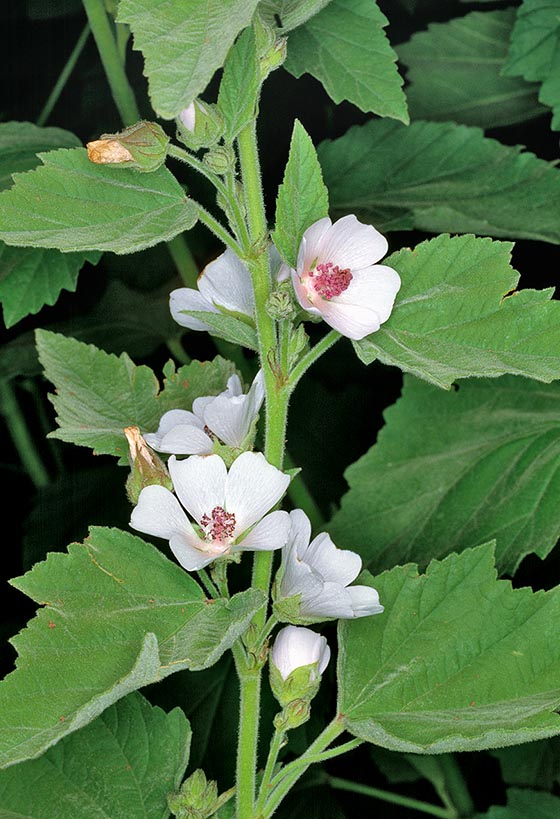 To the genus Althaea belong, after various authors, 6 to 12 species of herbaceous perennial plants native to Europe and western Asia. The Marshmallow is present throughout Europe except in the north, also in North Africa, the Middle East and southern Siberia, and has been introduced in North America.

The name of the genus comes from the Greek words “althain”, “altamen” or “altherim”, meaning to help, to heal; Althea was a heroin of the Greek mythology, wife of Oeneus. The name of the species officinalis is a term widely used for the plants having medicinal properties, many of which were employed in the “officinae of the simples”, the pharmacies of yore.

The Marshmallow (Althaea officinalis L. 1753) is a perennial herb, with robust taproot, cylindrical, with a diameter of 1-3 cm, ramified, yellowish white or pale brown, and white inside.

The plant is whitish of greyish tomentose, due to the dense cover of ramified hairs (stellate hairs), 40-120 (200) cm tall, with usually cespitous look, with simple stems more or less ramified, erect; leaves alternate, palminerved, the lower ones being ovate-cordate of sub-orbicular, almost entire or trilobed, the central ones entire or palmate-lobate, ovate-acuminate or triangular, acute, crenate-jagged (4-7 x 6-10 cm), often rather plicate, the upper ones lanceolate (1-2 x 5-8 cm), shortly petiolate, velvet on both faces; flowers shaped like those of the mallow, on short peduncles, solitary or in glomerules at the axil of the upper leaves, with obovate petals (1,5-2 cm), 2-3 times longer than the calyx, pinkish white or violet pinkish; red-purple or violet anthers.

The blooming is concentrated from May to August (September). Linear-lanceolate segments of the epicalyx, oval sepals, acute, folded on the fruits (schizocarps). The seeds (mericarps) are reniform, little wrinkly, flattened-trigonal, brown, more or less densely pubescent due to stellate hairs, especially on the back, about twenty and merged in a life ring around the base of the styles.

The marshmallow grows around the swamps, along the banks of the ditches, in the humid, even brackish, locations, in the soils humid and rich of salt, from the plain up to 1200 m of altitude. In phytotherapy are mainly utilized the roots (collected in October-November), but also the leaves and the flowers (collected from May to August), preferably coming from two years old plants.

The root is employed against the peevish coughs, laryngo-tracheo-bronchitis, in the forms where is necessary to thin the secretions and in some diseases of the digestive system (gastroenteritis, recto-colitis), cystitis. The decoctions, but especially the cold maceration, are suggested for gargles in the mouth and tonsils infections, for enemas in acute enterocolitis, for poultices on sores, boils, phlegmons, etc. Also the leaves and the flowers, in infusion, are useful against the cough and the throat inflammations. For external use, the marshmallow is prescribed in particular for the dry skins and itchy dermatosis. I remind that the employment of the preparations based on the marshmallow is not compatible with the tannin, iron and the consumption of drinks with high alcohol content.

Its extracts are often used as vehicle of medicines with irritating action as protective. In phytocosmetics, the preparations based on its extracts are appreciated as decongestant and softeners for dry, tired and subject to couperosis skins. 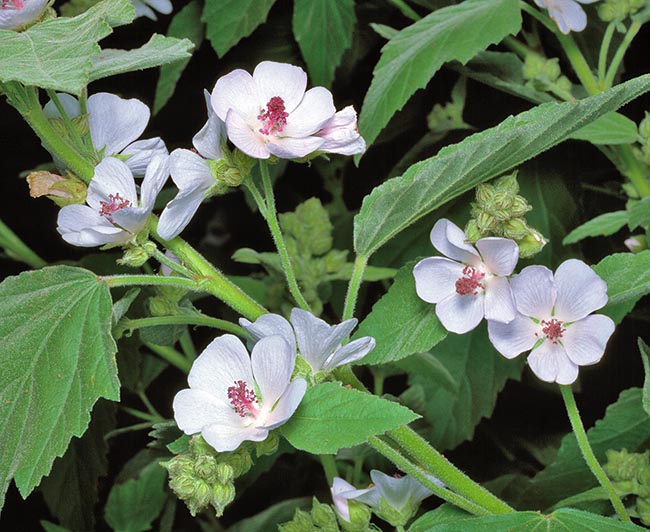 It grows in humid places, even brackish. Roots, leaves and flowers have medicinal virtues © Giuseppe Mazza

The popular tradition teaches that the root of this plant, previously skinned and blanched, was given to chew to the children suffering from the dentition troubles.

In cosmetology the marshmallow infusion prepared through maceration in lukewarm water, enters the composition of the lotions for the face, of the refreshing masks, of the emulsions and of the creams.

The marshmallow occupies without any doubt an important place among the oldest and most famed medicinal plants. The old Greeks used it almost every day, so many were the properties it was attributed for. Egyptians and Romans used the boiled leaves as food; it had huge reputation also in the Middle Age medicine and probably its wide diffusion is linked to this fact.

The famous physician Pier Andrea Mattioli (Siena, March 12th 1501-Trento, 1578) wrote about the marshmallow: “It has been proved that assuming one and a half drachma (= 3,89 g) from its seeds in powder in the wine, breaks and takes out the stones generated in the kidneys, stimulates urine and heals the pain caused by them”. Charlemagne cited the marshmallow in its Capitularies among the soothing and softening plants for treating the infected and swollen wounds, and it was one of the plants tilled in the monasteries. The marshmallow is also a good melliferous plant.

Softening-fluidifying infusion against the dry coughs

Two level teaspoons of flowers in a cup of water: to boil for one minute and leave in infusion fifteen minutes, add a table spoon of honey (preferably chestnut). To drink warm three-four times per day. It can be replaced by cold maceration in water for 6-8 hours with 2 g of ground or crushed root in 150 ml of water.

One spoon of ground roots in a cup of boiling water: bring to boil and allow cooling. To apply on the skin by means of cotton wool for fifteen-twenty minutes, or to use for repeated rinses and gargles.