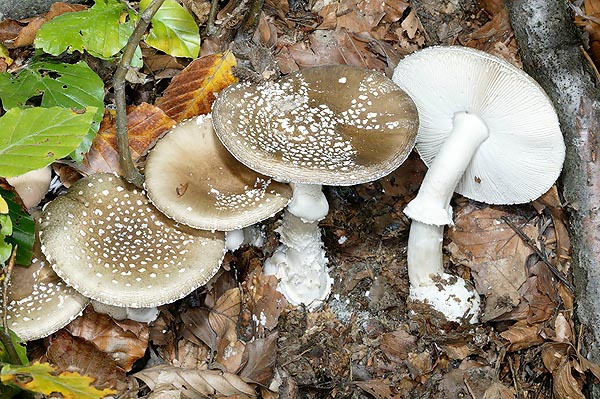 One of the most dangerous fungi, mortal by sure © Giuseppe Mazza

The origin of the name, from the Latin pantherina = relating to the panther: due to the colour of the cap.

The Subgenus Amanitaria is characterised by basidiomata with a general or universal veil with filamentous, floccose, hyphal structure. Margin of the cap striate, bulbous base, “circumcised” volva, and dissociated in one or more rings (circinate).

Stipe: 5-15 cm long x 0,5-1,5 cm wide, generally stout, slender, cylindrical, fistulous, attenuated at the apex and enlarged at the base, in a sub spherical-ovoid bulb, of white colour. Rather low ring, ample and membranous, persistent, white. Volva, adherent to the bulb, with the upper part clearly circumcised and circinate, white, finely pruinose.

Habitat: ubiquitous in summer, late autumn, mainly in woods of latifolious trees (oaks, hazels, hornbeams and chestnut trees), but also close to conifers (spruces and pines). It can be found in the Alpine areas as well in the Mediterranean ones. 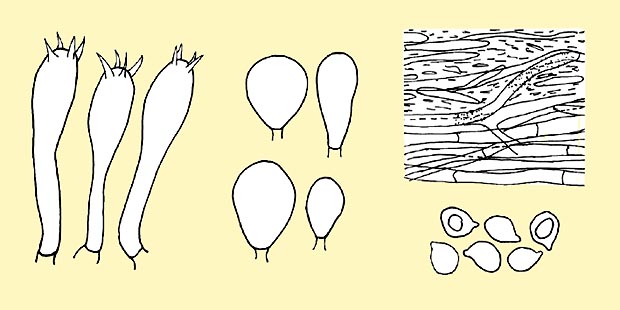 Pantherine or neurotoxic anticholinergic syndrome, with short latency, from 15-30 minutes to about 4 hours, from the ingestion. Main symptoms: neuropsychiatric disorders (euphoria, elation, anger, confusional condition), dilatation and contraction of the pupil at alternate phases, voluntary movements lacking of co-ordination, excitement or depression of the central nervous system, possible fits, rarely death, duration of the symptoms, from 4 to 8 hours. Same syndrome as the Amanita muscaria, but with a more serious clinical picture.

Notes: very common mushroom, almost an infester in the Mediterranean areas, and easily recognizable due to some basic distinguishing characteristics, such as the brown colour of the cap, strewn of several white flocks, the clearly striate margin, the base of the stipe with circumcised and circinate volva.

Varieties of the species, similarly poisonous:

Remarks: it may be mistaken especially with other resembling Amanitas like the Amanita spissa, Amanita rubescens, Amanita aspera, edible after cooking, which show a very similar colouring of the cap, but attention must be paid to the type of volva, which, in these last ones, is dissociated, napiform, moreover, they have a non striate margin of the cap, some tend to assume a reddish colour (typical of the Amanita rubescens). A possible confusion might arise with the genus Macrolepiota, the mushrooms belonging to this Genus do not hold a volva, but only a bulbous base; unfortunately, novices can mistake them, but they are two distinct Genera, and for this reason, they must never be compared with photos taken from texts, without knowing their distinguishing characteristics.