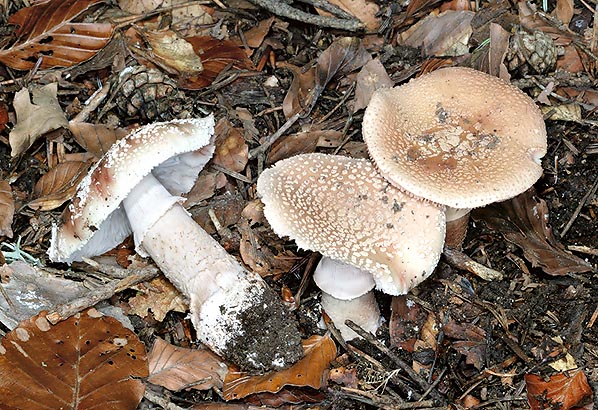 Good edible after about 20 minutes cooking. Not to mistake with Amanita Pantherina © Giuseppe Mazza

The name, of Latin origin, rubescens (= which turns red), due to the change in colour of the flesh with the time.

The Section Validae is characterised by basidiomata with a hyphal structure mostly sphaerocystic, vesicular, crumbly, so that the general or universal veil protecting them during the first stage of growth (primary), when breaking, remains completely on the surface of the cap, in the form of small, powdery, patches, which can easily disappear. The volva, almost absent, shows some small beads, adherent to the bulb (napiform-rooting volva). Non-striate cap margin.

In this Section are found Amanitas with persistently white flesh and others with more or less reddening flesh, most of them are edible, after cooking, as they contain thermolabile toxic substances, between which the hemolysins, which are eliminated with temperatures of 70-80 °C. 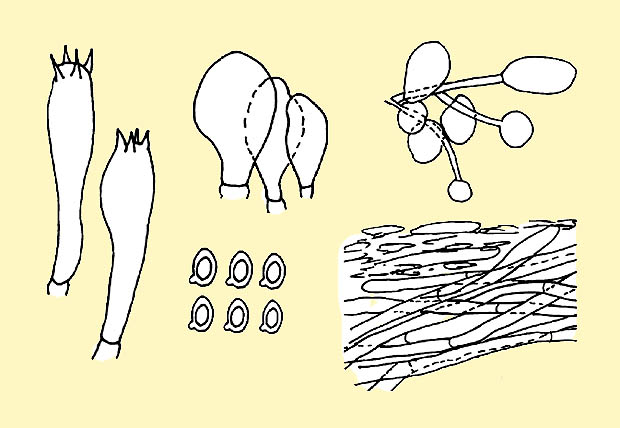 Stipe: 6-18 x 1-2 cm, generally stout, cylindrical, fleshy, attenuated at the apex and enlarged at the base, in a bulb from sub spherical-ovoid to napiform, it soon stains red, mainly at the base, where often it breaks and tears. It remains white over the ring. Wide white ring, persistent and striped on the upper part. Frail volva, dissociated in thin remnants or floccose beads, soon reddening.

Habitat: it grows from spring to late summer-early autumn, as well as in latifolious (oaks and chestnut trees) or coniferous (spruces, pines), woodlands.

Edibility: good edible, after cooking for about 20 minutes.

Notes: this species is easily recognizable due to its rather stout appearance, its cap of prevailing reddish brown colouring, with greyish-white warts and non-striate margin, base with napiform volva, blushing flesh, wide membranous, white, ring. It is worth being able to recognize it, as, after the Amanita caesarea (choice edible, even when raw), it is the second species of the Genus worthy of being eaten.

Varieties of the species:

Amanita rubescens for. alba VoKer, same as the type, but entirely white.

Remarks: Possible confusion with the Amanitas of the Section, between which: Amanita Spissa, Amanita franchetii, Amanita valida, Amanita excelsa, Amanita cariosa, but not to be mistaken, on the contrary, with the Amanita pantherina, toxic, which shows a brown colour of the cap with striate margin, circumcised volva, circinate and white, white stem and white ring, persistently white flesh.