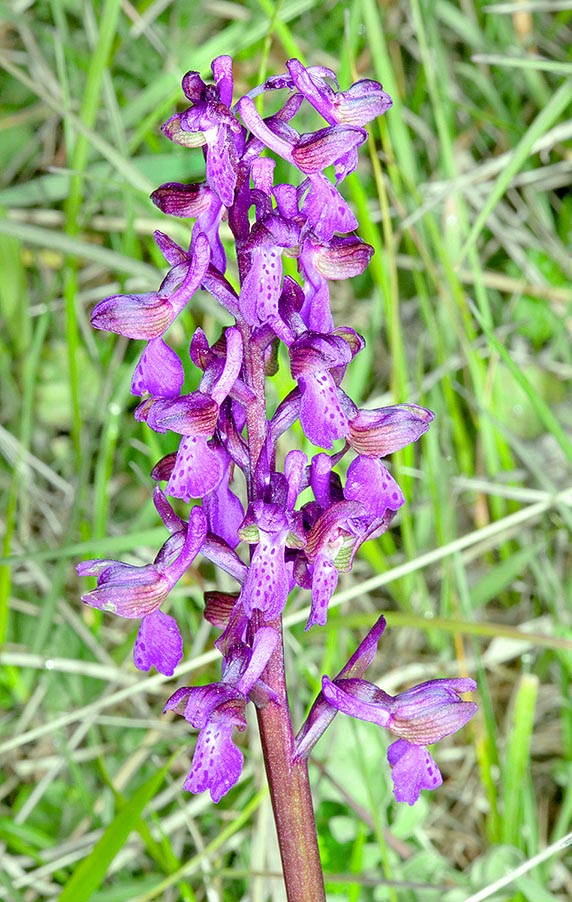 Euro-Mediterranean, Anacamptis morio is one of the most diffused Italian orchids, excluding Sardinia © Giuseppe Mazza

Species of the most varied environments, like dry meadows, mountain pastures, bushes and wood clearings, in any case having an extreme ecological tolerance, especially if in full luminosity, but on any type of soil, usually can be found from the 100 to the 1400 m of altitude and may reach the 1900.

We can find Anacamptis morio (L) R.M. Bateman, Pridgeon & M.W. Chase, 1997, in all Italian regions, but Sardinia. To be considered as Euro-Mediterranean, starting from southern Norway, goes eastward up to Iran and is absent in the southern regions, replaced by the species Anacamptis picta (Delforge, 1994), very similar but more delicate, with a rather slender look, the flowers inconspicuous, more spaced, and with thin spur.

Recently assigned to the genus Anacamptis, after chromosomal strudies, in 1753 was named by Linnaeus, attributing it to the genus Orchis, after examining some specimens of Baden-Württemberg, basing for the species on the previous Latin name morio, dating back to the Renaissance, whose meaning keeps doubtful.

Many maintain that it comes from the term jester, clown, considering the blatancy of its appearance. Others think that it gets the name from “morione”, that is “helmet” in the ancient military jargon or from “morion”, in Latin “precious stone”.

We can assume that “morio”, in Latin “to mislead”, comes from its chromatic behaviour, at times deceptive and unexpected. In general it can appear with a dark violet colour, or with any type of red, untile being of a nice pale pink or even albino.

In this regard, it seems that the albinism comes from an excessive action of the mycorrhyza, the fungus symbiotic to many orchids, that should deprive, in the exchange, too many energetic substances from the seed.

The definition of the genus should come from the Grek term “άνακάμπτειν” (anakamptein = to droop), refrerring to the tepals characteristically curved.

Anacamptis morio is part of geophytic bulbous species, that adapted to more temperate climates at ground level with two underground tuberiform roots, ovaliform. Tall 10 to 35 cm, is a robust, but low, herbaceous plant, with green caulis, cylindrical, that fades to violet in the upper part. 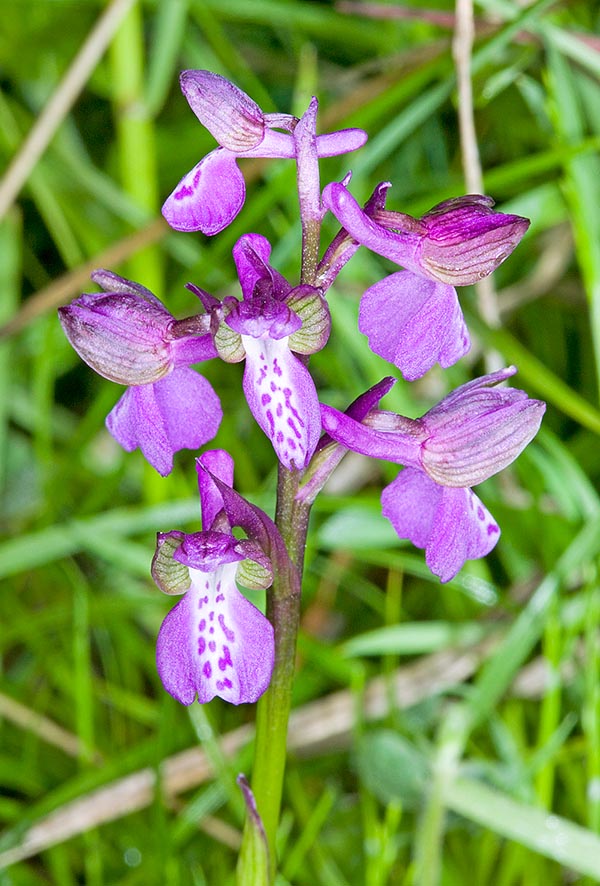 The basal leaves, of causal shape and green-light bluish, are grouped in a rosette, conversely, the cauline ones embrace the stem.

The helmet, formed by the merged sepals, with flowers consistent to the flower, is embellished by evident greenish striations. The median part of the labellum, a little trilobed, with intense red spots, is just more prominent than the two sides and appears slightly crumpled up on itself. The sepals are oblong, just oval, the petals are narrower. The spur, long roughly as the ovary, of cylindrical shaoe, may be linear or slightly curved. The gynostemium has short conformation, with the lodges of the anther of purple colour and greenish pollenodes.

The blooming period goes from March to May.

Among the most diffused orchids in Italy, it is named in several ways, depending on the regions, and belongs to a group of species used for getting from the tubers a sort of flour called Salep, energetic and very substantial, rich of proteins, sugars and mucilage. Being the collection of orchids strictly prohibited, this data must be considered only as a curious and interesting information.

Similarly to species belonging to the genera Ophrys and Orchis, also this species is totally devoid of nectar and therefore must improvise something for getting the pollination.

Among the various strategies, stands out the “genial” imitation of a nectariferous plant. We can say that the facies characteristic of many palearctic orchids is nothing else than an imitation of herbaceous plants, especially Lamiaceae, whose structure appears to the insects as very attractive.

Among its most imortant pollinators we can surely mention the Pierid Lepidopterans: Pieris brassicae, P. napi and P. rapae and the Sphyngids Macroglossum stellatarum and Hemaris fuciformis. Among the Syrphid Dipterans: the Episyrphus balteatus and the Rhingia campestris. Among the Andrenid Hymenopterans the extremely efficient Andrena flavipes or, among the Apids, the Bombus pratorum, the B. terrestris and the B. hortorum, including the Apis mellifera.