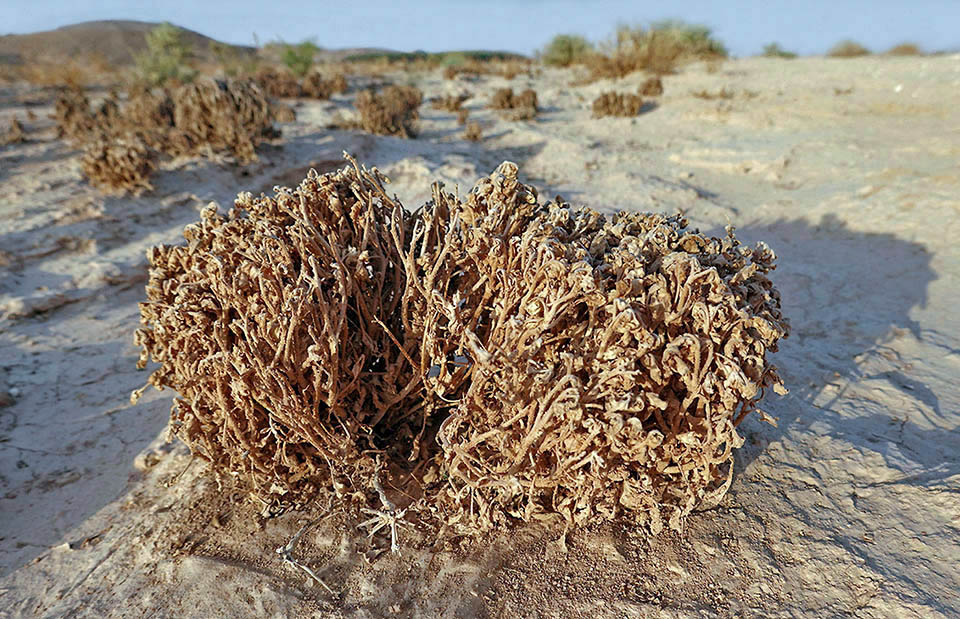 Known as Rose of Jericho or Rose of Fatima, Anastatica hierochuntica is native to Middle East, Sahara and various regions of North Africa © Ori Fragman-Sapir – www.flora.org.il

Anastatica hierochuntica L. is a species of the tribe Anastaticeae, family Brassicaceae, native to the arid sandy zones of Middle East, of the Sahara Desert and parts of northern Africa, Iran, Egypt, Palestine, Israel, Iraq, Jordan and Pakistan.

It has various vulgar names. In all the Arab peninsula and in the nearby countries it is called “Kaff-e-Maryam” (Mary’s hand) with reference to the Virgin Mary who, while travelling towards Nazareth, quenched her thirst with the water enclosed in this plant and as a gratitude sign blessed it making it immortal.

Another legend affirms that when Jesus was born all the plants of this species expanded and flourished and still do this in memory of this event.

Another tells that the plant bloomed regularly when Jesus was still alive, but now of His death on the cross mysteriously the plant dried to then revive with the resurrection, hence the name of “resurrection plant”. 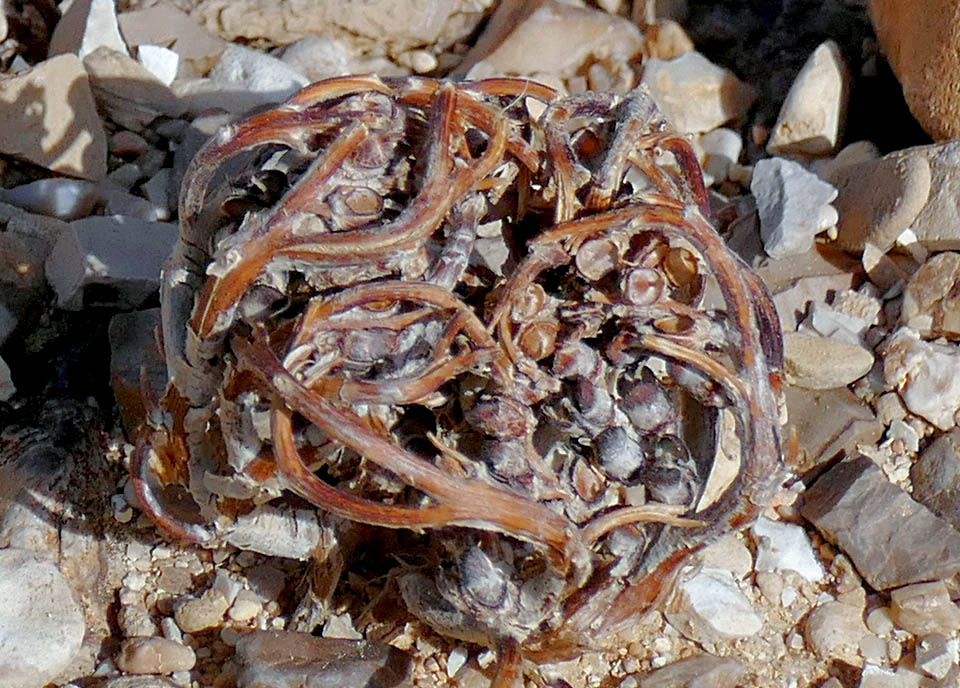 It’s an annual species. In the dry season it folds the branches bearing the seeds forming a spheroid mass that the wind rolls on the sand © Ushi Engel – Israel Reiseleiter

The plant is also called “rose of Jericho” and this is taken from the Bible. In fact, in the Sirach, about God’s delivery of the Wisdom to the people of Israel, we read: Wisdom grows ….. like a palm in Ein Gedi, like the plants of roses in Jericho like a majestic olive tree in the plain ….. (Book of Sirach 24,14) even if, probably, the plant cited is not the A. hierochuntica but another species, maybe the oleander (Nerium oleander L.).

The name of the genus Anastatica comes from the Greek Anastasis, resurrection, because even if dried, if put in water it opens and resumes its shape as if it was resurrected. The epithet hierochuntica refers to the old name of the city of Jericho.

A. hierochuntica is an annual plant, about 5-10 (-15) cm tall, with ramified stem from the base and with branches usually ascending, often rolled inward in dry conditions, densely pubescent with stellate hairs. The leaves are 10-20 mm long, 5-10 mm broad, spatulate, 3-5 lobate towards the apex or entire, supported by a short petiole. The flowers appear during the months of March and April and are small, about 2 mm in diameter, axillary, subsessile of white colour, hermaphrodite with nectariferous lateral glands in couples, each of semilunar shape. 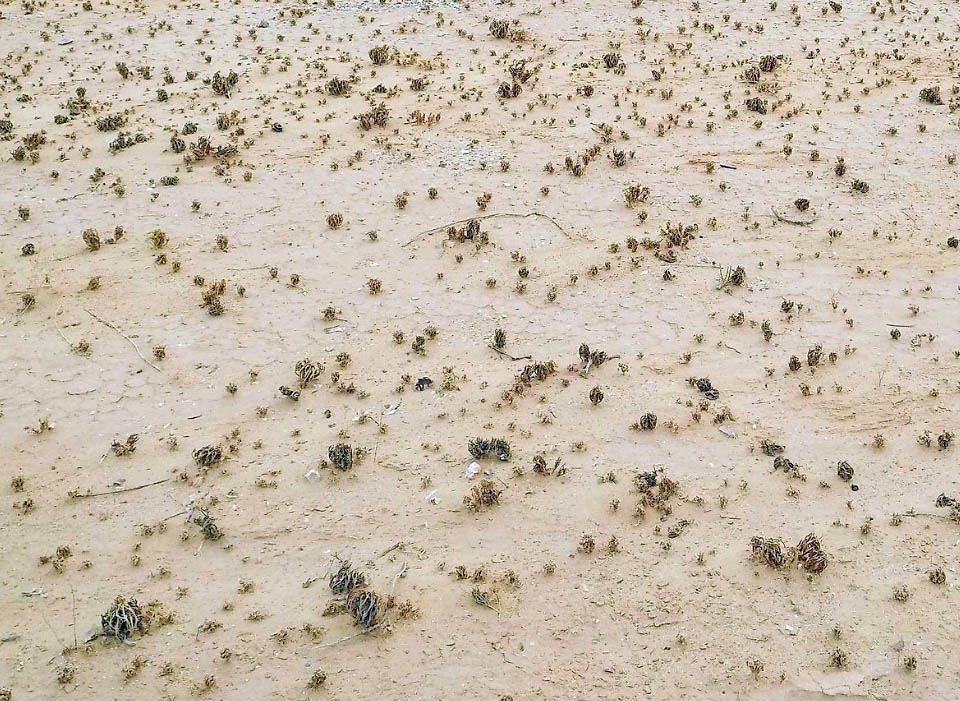 In the rain season the wet branches open under the mechanical effect of the heavy rain and free the seeds that germinate in a short time © Ori Fragman-Sapir – www.flora.org.il

The sepals, shorter than the petals, are 1,5 mm long and the petals reach the length of 2 mm. The stamens are six and are 1,5-1,7 mm long. The ovary is globose, bilocular with 2 ovules per loculus, and the style is as long as the ovary. The fruit is a globose silicle of about 4 mm, with beak and lateral appendages shaped like a cup. The seeds are ovoid and are about 1,5 mm long.

The dispersion of the seeds occurs with a very particular but effective mechanism. During the dry season the plant dies and the branches bearing the fruits close in a ball that under the action of the wind detaches from the stem and rolls in the sand even for long distances.

When the dry branches are wet, by dew or by rain, they widen exposing the seeds. The curling and the distension of the branches are purely mechanical phenomena (hygrochasic movement) and do not imply tolerance to the drying of the cells as is the case in other plants that recover their vital processes after dehydration. Therefore, the seeds are sent away by the strength of the raindrops and by the repeated curling and unfolding of the branches because all the plant is involved in the dispersion and in the conservation of the seeds. 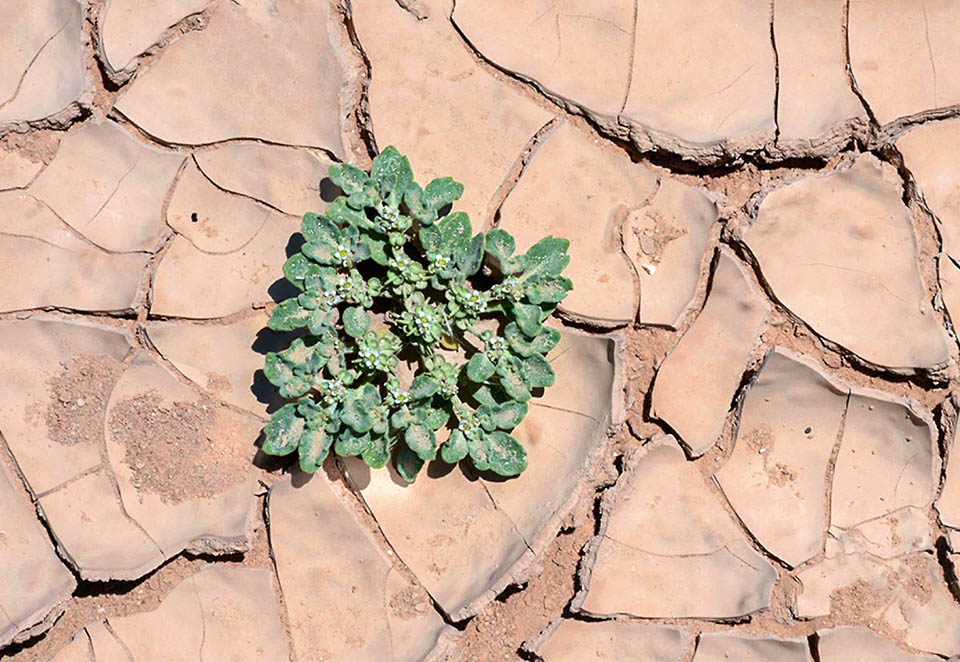 A desert miracle, almost a resurrection, associated to legends and sacred events like the life of Jesus and of the Madonna © Ori Fragman-Sapir – www.flora.org.il

The quantity of dispersed seeds depends on the intensity of the rainfalls. In fact, after heavy rains, most of the seeds are released and carried in small depressions, little deep, that collect the runoff water allowing their immediate germination and subsequent growth.

A. hierochuntica is typically a plant of the extreme desert; it is common in areas that receive an average annual rainfall of less than 70 mm. It occurs in sandy areas, rocky places and silty plains. In its habitat one can see the dry plants ‘waiting’ for the next rain for 5-10 years.

Interestingly only a rain of more than 10 mm will cause the inner stems to absorb enough water and open. Smaller rain will not cause anything. In fact, the mother dead plant is a water gauge that opens and disperses its live seeds only when there is enough water for them to germinate, bloom and fruit, a real miracle of the extreme desert. A. hierochintica is considered to be an ancient desert plant with no other close relatives in its family. It is strange that the plant does not grow near Jericho, but found some 20 minutes drive south from it.

The entire plant of A. hierochuntica, in the Arab countries, is amply consumed as a drink. 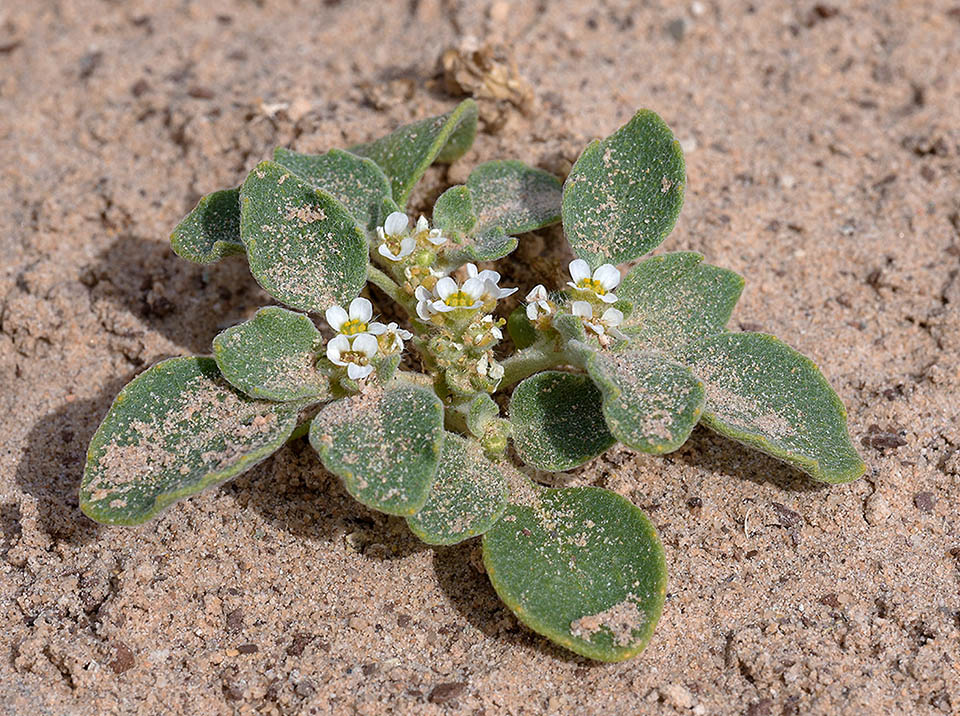 The cross flowers show the belonging to the Brassicaceae family, that of rapeseed and cauliflower, and besides providing a drink has promising medicinal virtues © Ori Fragman-Sapir – www.flora.org.il

It is also utilized in traditional medicine for treating various health ailments. The entire plant, reduced in powder and mixed with honey, is utilized as a remedy for the difficult deliveries and for uterine bleeding. The whole plant, boiled in water, is used for pelvic compresses against infertility. Under the form of decoction, it is used also for treating asthma, gastrointestinal diseases, depression, hypertension, indigestion, headache, cold, fever, malaria, epilepsy, fatigue, diabetes, heart diseases.

Recent studies have revealed the chemical composition and the properties of A. hierochuntica confirming the beneficial effects of the popular tradition. In the foliar buds, in the stem and in the root has been ascertained the presence of eight minerals (Mg, Ca, Cr, Mn, Fe, Co, Cu and Zn) and of phenolic compounds. It has also been proved an antioxidant activity and the presence of anti-free radicals.

It has been observed that the plant has hepatoprotective properties being capable of significantly reducing the activities of the transaminases and of the alkaline phosphatase. It has been noted also for its capacity to activate the phagocytes and of having antimicrobial activity. Lastly, it has been proven that extracts of the entire plant, in vitro, hold specific anticancer properties on the breast cancer cells.