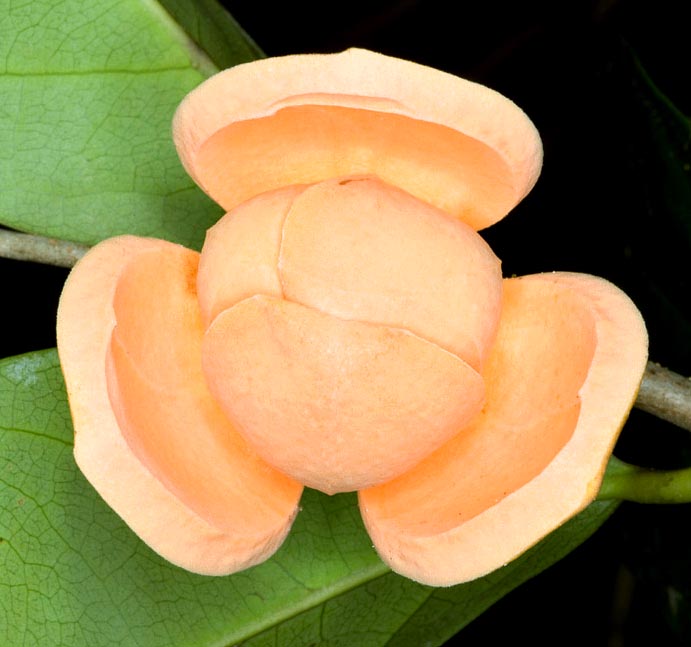 Annona montana is a Central-South American tree, evergreen semideciduous, that can be 10 m tall. Usually solitary flowers with thick petals, three 5 cm outer ones and 3 inner, almost closed, of about 4 cm © Giuseppe Mazza

After some, the name of the genus comes from the Latin “annona” = aliment, foodstuff, with reference to the alimentary utilization of the fruits, after others, from the local name (in Taino language); the name of the species come from the Latin “montanus” = related to mountains, mountain, with obvious signification, even if, actually, the plant grows up mostly at low altitudes (0-600 m).

Evergreen or semi-deciduous tree, tall up to about 10 m, it shows elliptic or lance-shaped leaves, with a length varying up to about 25 cm and a breadth up to 8 cm, of a glossy intense green colour on the upper page, paler and dull on the inner one; the leaves, if rubbed, emanate an intense smell.

The flowers, which come out on the branches, are usually solitary with a corolla formed by six yellow petals, the three outer ones being pulpy, long about 5 cm and thicker on the apex, the inner three, long about 4 cm, almost closed.

The fruits are syncarps (a whole of several simple fruits, grown up at the same time to form an apparently unique fruit), almost spherical, with a diameter up to 15 cm, with the surface of a yellowish green colour when ripe and covered by short soft thorns; rather fibrous yellowish pulp, aromatic, with the taste reminding that of the Annona muricata, but of a minor quality.

The seeds, which have a short lasting germination period, are brown yellow, elliptic, compressed, long about 15 mm and 6 mm broad. It reproduces by seed and begins to fructify already when 2-3 years old. 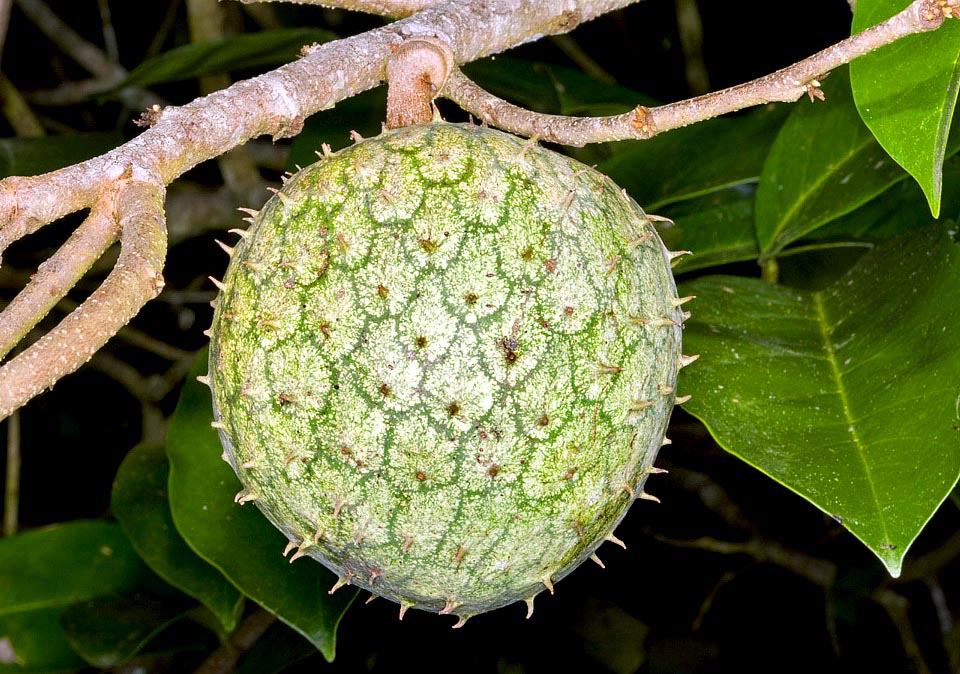 The fruits, like strawberries or pineapple, are syncarps, i.e. come from the fusion, while growing, of the true fruits forming in this case an about 15 cm sphere. Edible but not choice, if compared to other annonas using at times this species as rootstock. All plant parts have medicinal virtues © Giuseppe Mazza

The plant, not much cultivated due to the poor quality of its fruits, if compared to the other annonas, is not much demanding about soil, and can be marginally cultivated also in the warm temperate climate zones, as it resists, when adult, to temperatures up to -4, -5 °C, even if with damage to the aerial part, and is less demanding about humidity, as it resists also to drought periods and for these reasons is often utilized as rootstock of others annonas, particularly the muricata.

All the parts of the plant, already utilized in the traditional medicine, contain several bio-active substances of remarkable interest in various fields of the medicine; the leaves contain, among others, the acetogenins, substances presently being under study for their presumed anti-cancer properties.