The Spitfin flashlightfish (Anomalops katoptron Bleeker, 1856), belongs to the class of the Actinopterygii, the ray-finned fishes, to the order of the Beryciformes and to the family of the Anomalopidae, the Lanterneye fishes.

The name of the genus comes from the Greek “anómalos” = unusual and “ops, opsis” = shape and the specific one always from the Greek “katoptron” meaning mirror with reference to the luminous spot under the eyes. In short, it is an unusual fish bright like a mirror.

The Anomalops katoptron lives in the western Pacific Ocean, from the Australian Great Barrier Reef to the Philippines and Indonesia up to northern Japan and going eastwards up to the Tuamotus Islands. 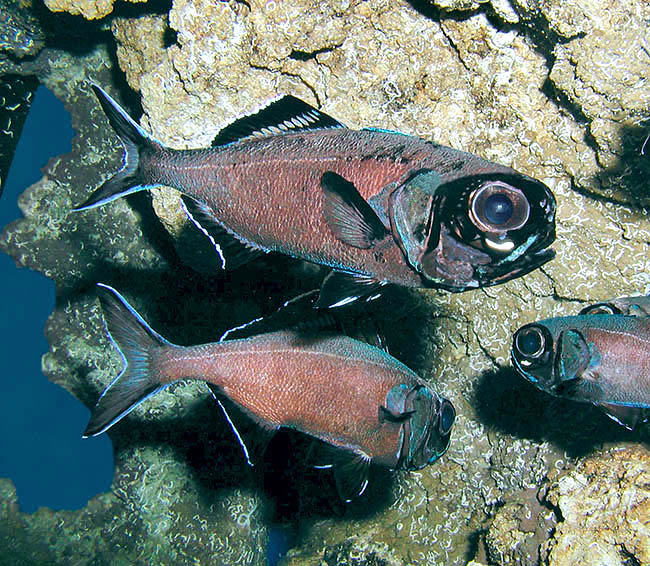 It is a fish loving the darkness of the grottoes where it hides during the day. It goes out looking for food when it gets dark. It has been seen in schools in shallow waters during the nights without moon an fished offshore at 200-400 m of depth.

It can reach the length of 35 cm. The body is dark, blackish grey, with pale spots on the great dorsal fin, edged in white, like the others. The lateral line is almost horizontal in respect to the profile of the head that swoops down towards a large oblique mouth. Under the big eyes, stands a luminous window shaped like a bean that opens and closes inwards intermittently hiding the intense bluish light produced by symbiont bioluminescent bacteria lodged in tubular structures.

Research carried out in Germany have evidenced that during the hunting night hours this blinking occurs about 90 times per minute, but that it slows down to 18 times a minute with a longer lighting time when the fish realizes the presence of planktonic preys. When the fish is hungry finally slowly loses its capacity of emitting light.

The Anomalops katoptron nourishes mainly of zooplankton. It can be hosted in poorly illuminated aquaria with many hideouts. A similar species, the Photoblepharon palpebratum, has even laid the eggs.