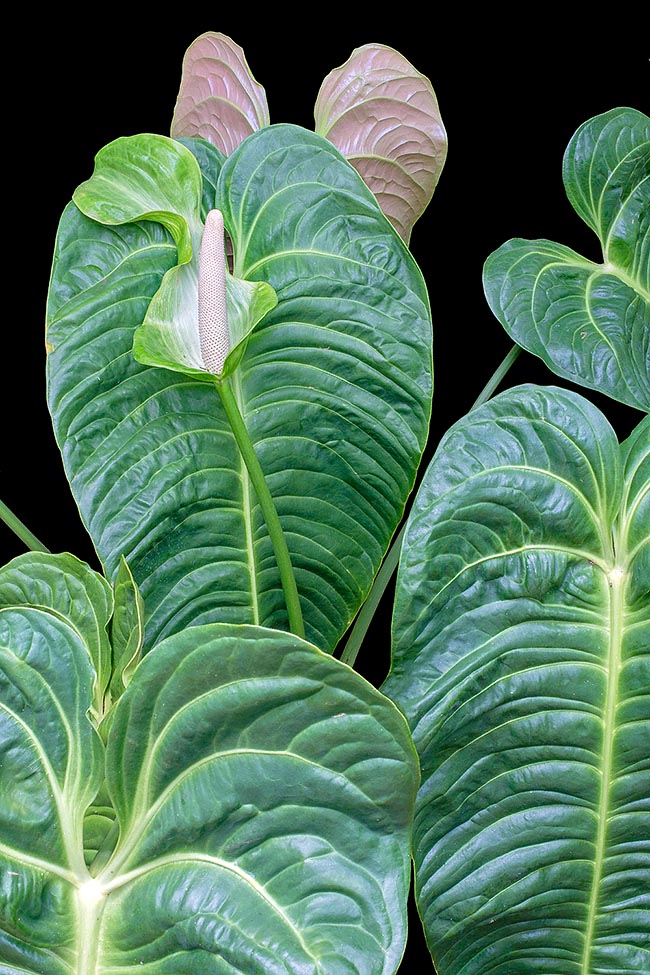 The Anthurium veitchii is an epiphytic herbaceous species endemic to Colombia. The big leaves, up to 2 m long, corrugate with prominent veins, are metallic dark green in front and suffused of purple behind © Giuseppe Mazza

The species is endemic to Colombia (Antioquia and Chocó) where it lives on the trees of the mountain pluvial forests around the 1000 m of altitude.

The generic name is the combination of the Greek substantives “ἄνθος” (ánthos) = flower and “οὐρά” (ourá) = tail, with reference to the spadix of the inflorescence; the species is dedicated to the family Veitch, owner of a famous London nursery, founded by John Veitch (1752-1839), active from the XVIII to the XX century, that introduced in Europe a huge number of exotic species.

The leaves on a 0,6-1 m long petiole, are simple, drooping, lanceolate with acuminate apex and cordate or auriculate base, 0,8-2 m long and 20-30 cm broad, deeply corrugate, coriaceous, of metallic dark green colour in front, at times suffused with purple behind, with prominent lateral veins, arcuate and close, of pale green colour like the central one; the new leaves are initially of dark bronze colour.

Axillar inflorescences, on 50 cm long peduncle, formed by an ovate-lanceolate spathe with acuminate apex, 7-12 cm long and 3-8 cm broad, initially erect, then retroflexed, of greenish white colour, and by a subsessile spadix, 8-10 cm long and of 1,5 cm of diameter, of cream white colour tending to pink.

The fruits are greenish white berries containing 1-2 seeds immersed in an irritating pulp due to the presence of crystals of calcium oxalate.

It can propagate at amateur level by seed, rarely available, but commercially it is easily reproduced by micropropagation, thing that has allowed its diffusion in cultivation.

Species among the most spectacular of the genus, cultivable in open air, as epiphyte on the branches of the trees or in suspended baskets, exclusively in the tropical and humid subtropical climate regions, not bearing temperatures under the 10 °C, if not exceptional and for a very short time with damage to the foliage; the position, from slightly shady to shady, must be sheltered from the wind. 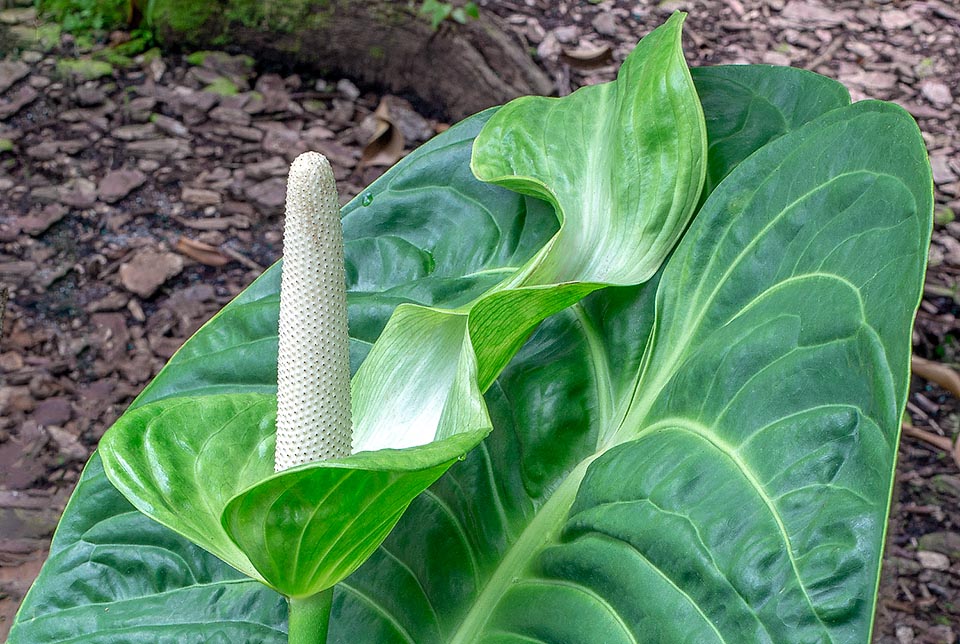 The unusual white greenish spathe, ovate-lanceolate with acuminate apex, before erect and then retroflexed, wraps at the base a subsessile 10 cm spadix © Giuseppe Mazza

Elsewhere, it is to be cultivated in greenhouse or in winter gardens with high ambient humidity, 70-80 %, and lowest nocturnal temperatures not under the 15 °C, in pots or in baskets preferably suspended utilizing a particularly aerated and draining substratum, of the type utilized for the epiphytic orchids. The watering must be frequent and abundant during the vegetative period, but without stagnations, spaced in winter in way to leave the surface of the substratum to dry up before giving water again; useful are the nebulizations with non calcareous water in presence of high temperatures. Monthly fertilizations in spring-summer with a hydrosoluble product balanced with microelements at 1/3 of the dosage suggested on the package.

→ To appreciate the biodiversity within the ARACEAE family, please click here.