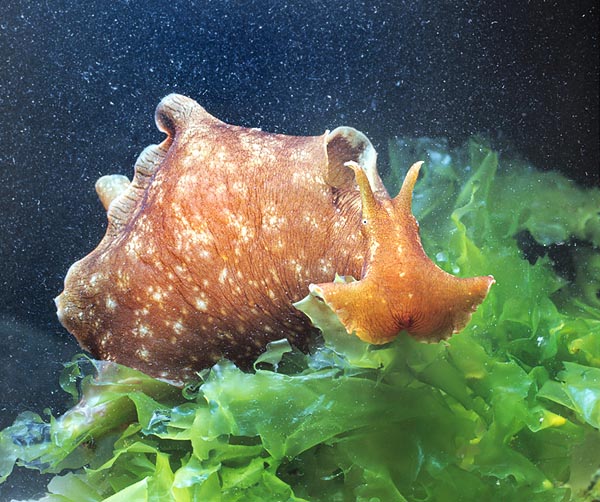 The Sea hare (Aplysia fasciata, Poiret, 1789, called Aplysia limacina until the beginning of the eighties of the XX century) is an odd marine gastropod, common also near our coasts, endowed of a long and thin shell. Roughly, it looks like a big terrestrial snail, with a stocky body.

Taxonomically, this strange invertebrate is afferent to the phylum or type of the Molluscs (Mollusca), class of the Gastropods (Gastropoda, this name comes from gasteros = stomach and podos = feet, as these are molluscs whose stomach acts as foot), subclass Opisthobranchs (Opistobranchia), order Tectibranchs (Tettibranchia), family Aplysids (Aplysiidae), genus Aplysia.

The genus Aplysia includes about 40 species, present in almost all the waters of the temperate and warm seas of Europe and Africa. It would seem that they are absent only from the boreal seas. Their fleshes are not edible.

Usually, they frequent the coastal waters, where they may be sighted also in mid-water, while swimming moving the wide flap expansions of the mantle. However, they spend most of their life crawling on the bottoms looking for algae, which practically are their only food.

The Aplysia fasciata is the most known among our local species of Gastropods (Gastropoda) ascribed to the subclass of the Opisthobranchs (Opistobranchia). It has a squat shape and is provided with an elongated, very thin, shell which, however, is totally covered by the fleshy mantle which forms two wide flap-like projections on the back. The foot is very wide and extended backwards. 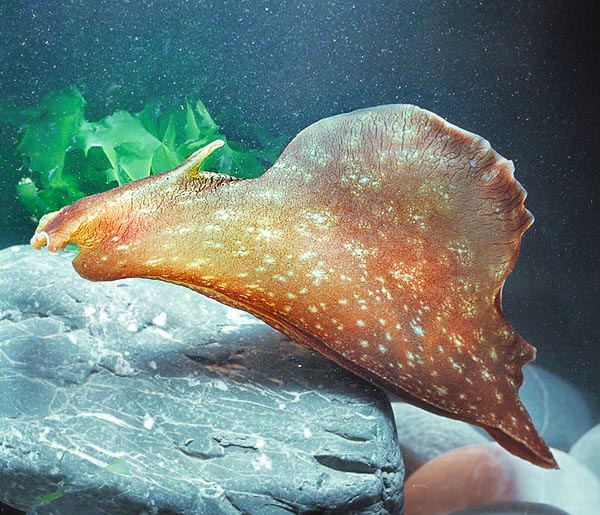 Usually it grazes algae crawling on the bottom, but can also swim © Giuseppe Mazza

The head is fairly elongated and equipped with two pairs of tentacle-like appendages. The two hind tentacles close each other and rather elongated, may remind the shape and the position of the ears of a hare, from which has come the common name of “sea hare”.

The colour is an almost uniform dark brown.

The mouth, or “peristome”, or opening, may have quite a variable shape: circular, semicircular, semi-lunar and slit-like.

The sea hares breathe by means of a unique gill placed inside the pallium cavity, behind the heart, from which comes the name of the subclass “opisthobranchs”, which means gill placed behind.

Also the single gill is covered. For this reason, this mollusc, like the other species of Aplysia, is ascribed to the order of the Tectibranchs (Tettibranchia), literally, covered gills; in the other order of the same subclass, the Nudibranchs (Nudibranchia), the breathing is, on the contrary, exclusively done by means of papillae placed on the skin surface.

The unconventional anatomical-comparative evolutionary characteristic of the Aplysia, or, more in general of the opisthobranchs, is however that in archaic time (possibly by the end of the Cambrian period, Palaeozoic or Primary Era), these animals lived inside a complete shell, much ampler than that present nowadays. Therefore, at a certain point of their evolution, they suffered an “8” shaped twist, called “chiastoneuria”. This torsion meant that in one of the two sides disappeared all the organs present there. Later on, when the recent types have formed, where the shell remains as vestigial remnant of the previous forms, the wrapped body has resumed back, unwinding, its initial position.

Therefore, anatomically, the opisthobranchs, and consequently also the Aplysia, are symmetrical molluscs, but they have not any more reformed in the side, where archaically have disappeared several organs, in particular the pair ones, that is those in double copy, like the kidneys and the gills, or part of those having a duplicate structure, such as the heart. For this reason, these molluscs have nowadays one gill only, one kidney only, and a heart with only one auricle or atrium.

In the Aplysia fasciata there is no sexual dimorphism: they are 25-30 cm long hermaphrodite animals. 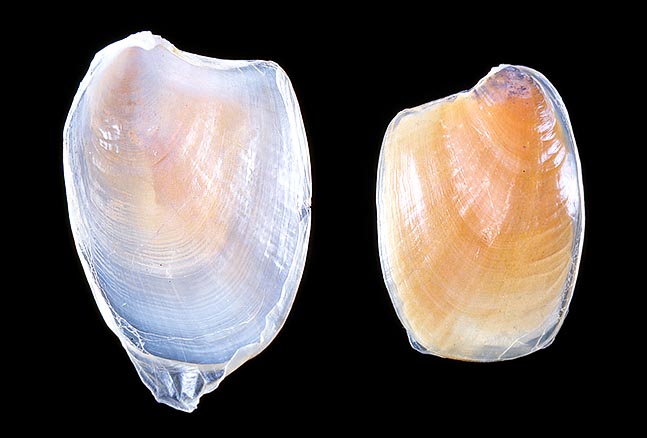 It is a hermaphrodite organism, like the rest of all opisthobranch molluscs. It reproduces by self-fecundation, only when a partner is missing, as it is equipped of feminine sexual organs as well as the masculine ones.

We must point out that, physiologically, as “hermaphroditism” it is meant a functional autonomy. Which means that a sea hare, like all the hermaphrodite organisms, for instance the terrestrial snails, the earthworms, etc., are capable (being each single individual endowed at the same time of genitalia of both sexes and therefore, of the sperms and the ovules) to proceed to the self-fecundation, which is, however, devoid of genetic variability, and so, inefficient on the evolution point of view.

For this reason, every hermaphrodite, therefore every opisthobranch, and consequently every sea hare, tends preferentially to couple with a conspecific, as it can behave as female as well as male, in relation to the sex the counter part chooses. Only in this way, in fact, an exchange of genetic material takes place, that genetic variability which is one of the driving forces of the evolution of the species. In the event that the absence of a partner happens, however, a form of self fecundation may take place, with all the evolution limits which follow, guaranteeing, at least, the numerical reproduction.

In many hermaphrodite invertebrates the fecundation is external, on the contrary, in the Aplysia, the same is internal. The fecundated eggs, rich in vitellus, are then laid in way to form long cords, which are to be stuck on an aquatic plant or on a rock.

From the eggs will develop the swimming larvae of the trocophore type, similar to those of the annelids (and for this, many zoological biologists suspect a common phylogenetic evolution) whose terminal stage is the planktonic-filtering “veliger”, a larva equipped with a foot, a mantle and a just outlined, from which, upon maturity, the adult will come.

For IUCN these molluscs have a status of “locally common”.