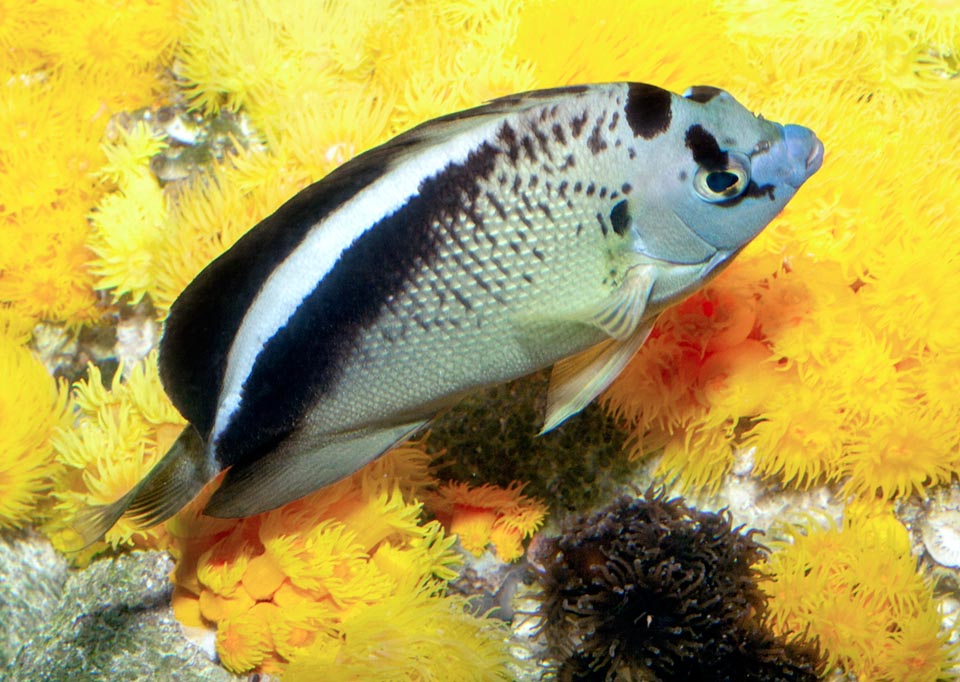 The Griffis angelfish Apolemichthys griffisi (Carlson&Taylor, 1981) belongs to the class of the Actinopterygii, the ray-finned fishes, to the order of the Perciformes and to the family of the Pomacanthidae, that of the multicoloured angelfishes, with 8 genera and almost one hundred  species.

The name of the genus Apolemichthys comes from the Greek “a” = privative of “Πόλεμος” (pomelos) = war, and “ἰχθύς” (ichthýs) = fish, it is then a “a fish not good for the war”, because of the absence of the inter opercular spines present in the other angelfishes, even if then, like all the Pomacanthidae, also the Griffis angelfish has its own, though small, characteristic opercular spine. The etymology of the genus griffisi honours the memory of Nixon Griffis, Administrator of the New York Zoological Society

The Griffis angelfish has been discovered and photographed in the early Seventies, in the middle of the Pacific Ocean, by the Australian photojournalist Valerie Taylor at the Gilbert Islands, south to the Marshall Islands, about half way between Papua New Guinea and the Hawaii Islands. 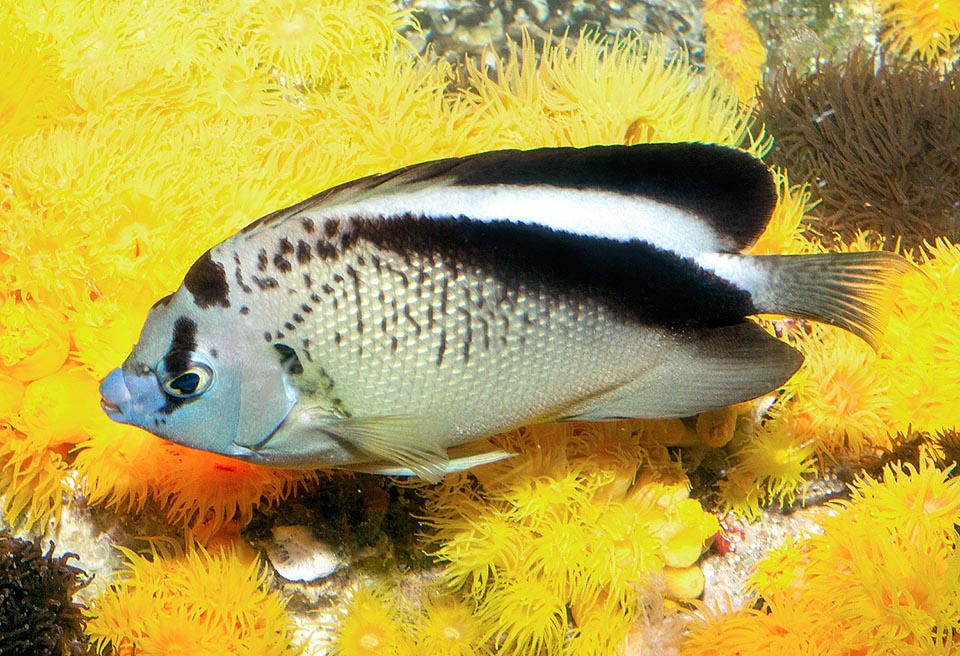 Photographed in Pacific Ocean middle, halfway between Papua New Guinea and Hawaii Islands, only in 1970 and described in 1981 © Giuseppe Mazza

Later on, in 1978, it was seized a little further South-East, in the Canton Island atoll, by Carlson and Taylor who described it as Holacanthus griffisi. Nowadays, we know that it is present in various sites of Micronesia, but also in Indonesia, Papua New Guinea and in various locations of Oceania such as the Caroline Islands, Solomon Islands, Nauru and Kiribati, which appears to be the eastern limit of the species.

The distribution area of Apolemichthys griffisi partially overlaps with that of Apolemichthys xanthopunctatus but it lives in deeper waters, usually in about 40-60 m, very often in the outer side of the reefs. 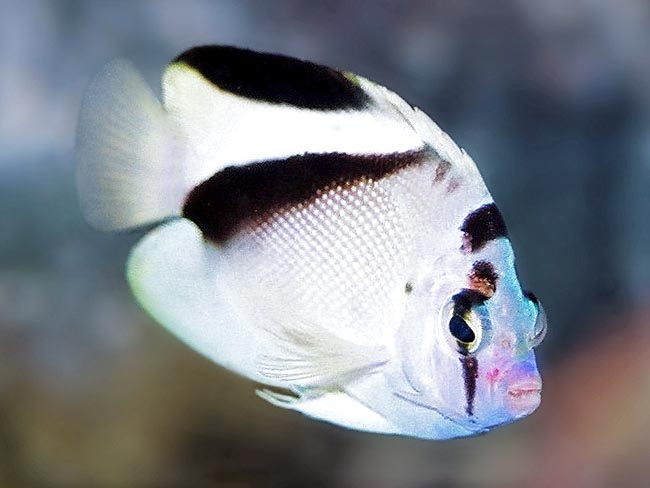 The eye is caught immediately by the livery because of its oblique black bands separated by a wide white one. The first covers almost all the dorsal fin and the second is parallel on the side. Then, there is a black spot in the upper part of the head and the classical, even if reduced, black vertical band crossing the eye.

Basically, it is substantially a white and black fish but its own elegance and a particular charm that renders it unique, even if more expensive than Apolemichthys xanthopunctatus, because, living in deeper waters it is even more difficult to fish.

Also in this case the juveniles differ from the adults, but not so much: the body is candid and the black lateral spots are missing, but with only 3 cm of size, the black bands are already well visible, like the black spot on the head and the band crossing the eye, not to talk of the bluish shade on the snout.

As usually occurs in the Pomacanthidae, the Griffis angelfish is able to digest the sponges and on these it bases its feeding, integrated by nibbling ascidians and benthic algae.

It lives isolated, or, more rarely, in small schools with one male controlling a small territory and a harem. If it dies, seen that it is a hermaphrodite protogynous species, the biggest female in the group changes sex and takes over the command. 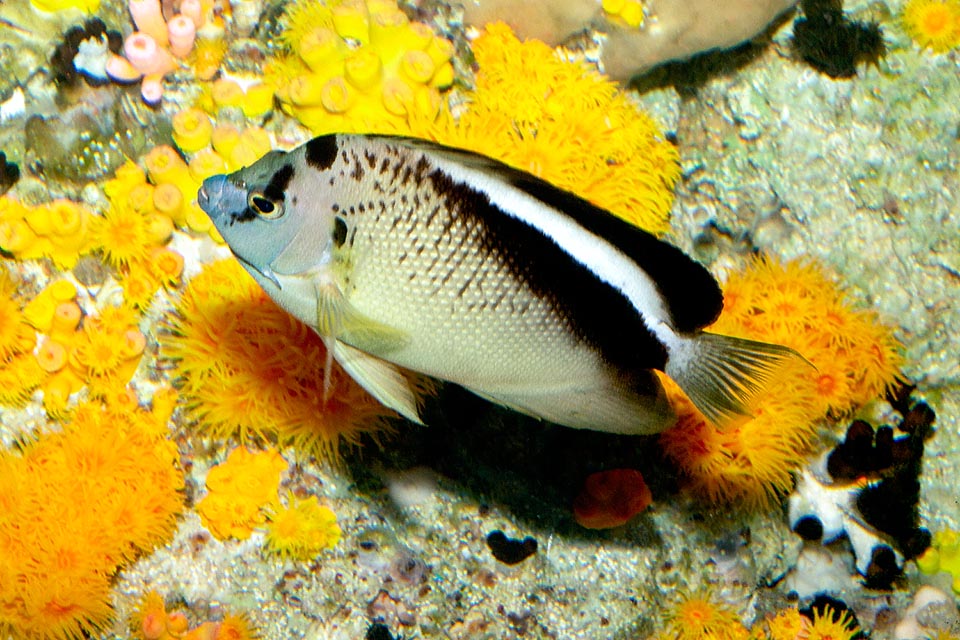 Easy to get stressed, difficult to feed and subject to various disease, is a very dear fish, good only for large public aquaria © Giuseppe Mazza

The coupling, with the female ready to lay, occurs during the twilight when the predators of eggs are less active. The eggs, released and fecundated in the surface, are dispersed by the currents.

Like for Apolemichthys xanthopunctatus feeding the Griffis angelfish is not at all easy. In aquaria, usually, are used frozen foods containing spirulina, small crustaceans such as Artemia salina and species of the genus Mysis, but the ideal thing would be to have some sponges available. Apart from the high purchasing costs, it is clear that these fishes, easy to get stressed and subject to various diseases, can be conveniently hosted only in the large public aquaria and are not suitable for the domestic walls.

In nature, the populations may double their membres decimated by the events in 1,4-4,4 years but these are settlements often very distant from each other and the species is already holding, in 2019, a vulnerability index to be surveyed, marking already 41 on a scale of 100.