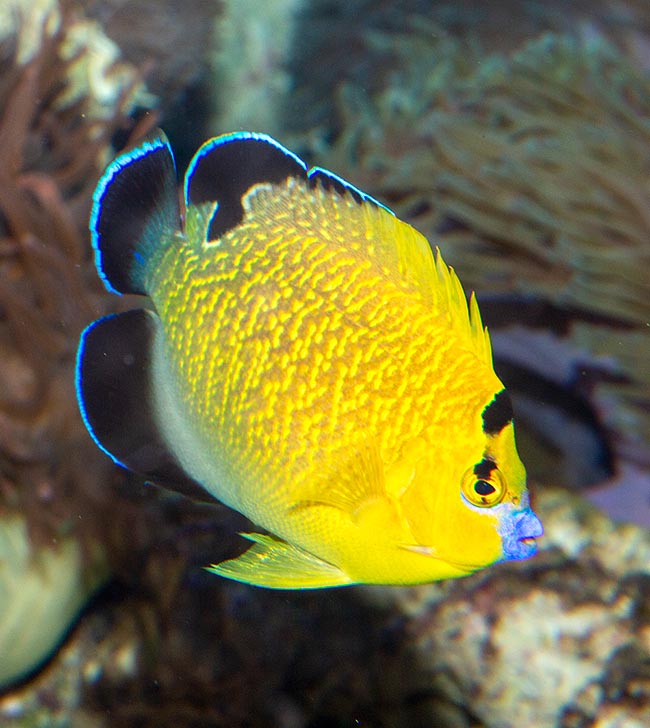 Described recently, Apolemichthys xanthopunctatus is present only in some areas of Oceania © Giuseppe Mazza

The spectacular Goldspotted angelfish (Apolemichthys xanthopunctatus Burgess, 1973) belongs to the class of the  Actinopterygii,  the ray-finned fishes, to the order of the  Perciformes  and to the family of the  Pomacanthidae, that of the angelfishes, counting 8 genera and almost one hundred species

The genus name Apolemichthys comes from the Greek “a” = privative and “Πόλεμος” (polemos)  = war, and “ἰχθύς” (ichthýs) = fish, that is, “fish unsuitable for a war” because of the absence, unlike other angelfishes of the inter opercular spines. In spite of this, like all Pomacanthidae, it has its own characteristic opercular spine, though of modest size, seen the dimensions of the fish.

The specific term xanthopunctatus comes from the Greek “ξανθός” (xanthos) = yellow and from the Latin “punctatus” = dotted, with reference to the splendid golden dotting of their adult livery.

The Goldspotted angelfish is native to Oceania.

We find it in Kiribati and the Caroline Islands, but it seems that it is present also in some locations of Micronesia and in the Nauru Islands.

By sure, it is not a common species seen the quite high cost equal to that of a medium sized aquarium with filtre, that the aquarits are eager to pay for having it as “status symbol” between the dometic walls.

Apolemichthys xanthopunctatus lives sedentary among the corals in relatively shallow waters, mainly between 3 and 8 m of depth, even uf then it was sighted on the outer side of the reefs, by around 65 m, while it was happily nibbling some sponge. 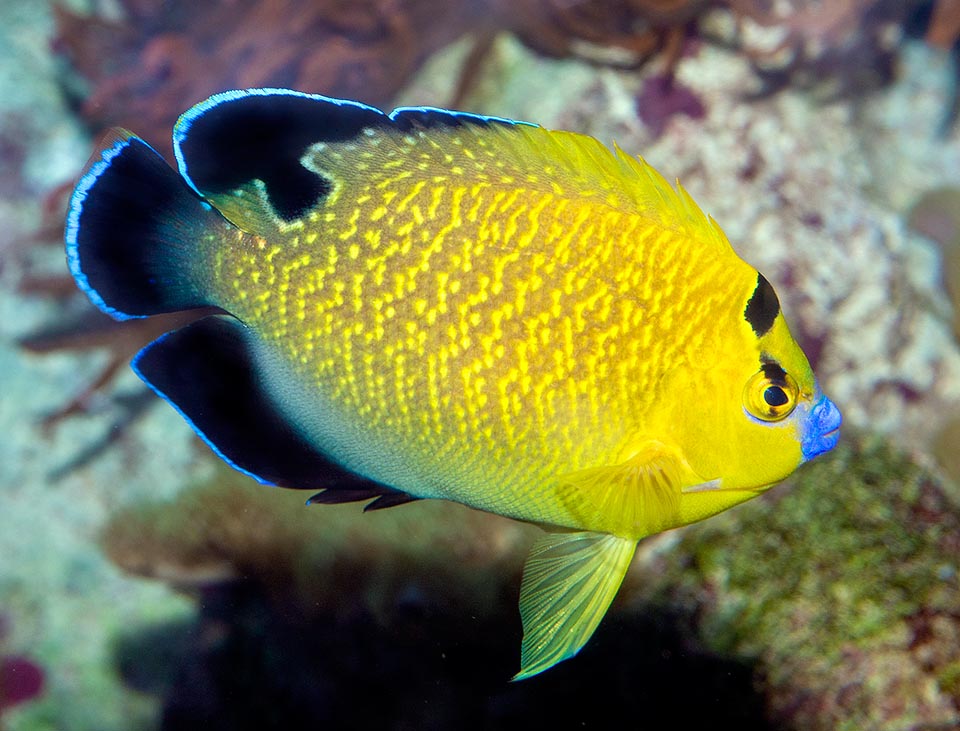 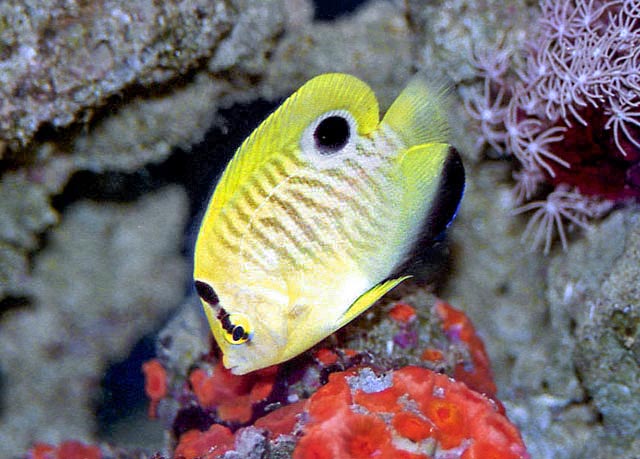 Juvenile, with a fake eye by the tail, resemble those of Apolemichthys trimaculatus © Hiroyuki Tanaka

The livery presents luminous and typical golden spots in an elegant contrast with the black of the three main fins, bordered with a bright electric blue colour, as well as the tip of the snout and the mouth that evokes the bill of a parrot. On the front we note a showy black spot serving to break the outline of the fish.

The look of juveniles is similar to those of Apolemichthys trimaculatus, a less expensive species, decidedly most known and popular.

Like them, in order to confuse the predators’ ideas, they have a false eye at the base of the dorsal fin and a black bar on the head crossing the eye with clear mimetic function.

But here, on the body, we note some more pronounced vertical waving lines that, growing, will form, merging, the characteristic golden drops.

As usually happens in the multicoloured world of the Pomacanthidae, the Goldspotted angelfish has the rare capacity of digesting the sponges and it is on these ones that its feeding stands. completed by nibbling sea squirts and benthic algae. It moves in small schools, with one male controlling a small territory and a harem, and if it dies, seen that it is a protogynous hermaphroditic species, the biggest female of the group changes of sex and takes over the command.

The mating with the chosen one, ready to lay the eggs, occurs on the twilight, when the predators of eggs are less active. After a short ritual dance, the spouses release and fecundate on the surface numerous eggs entrusted to the currents. Also the larvae are pelagic; They nourish of plankton and then grow up on the bottoms, sheltered by the corals, only when they have a certain size. 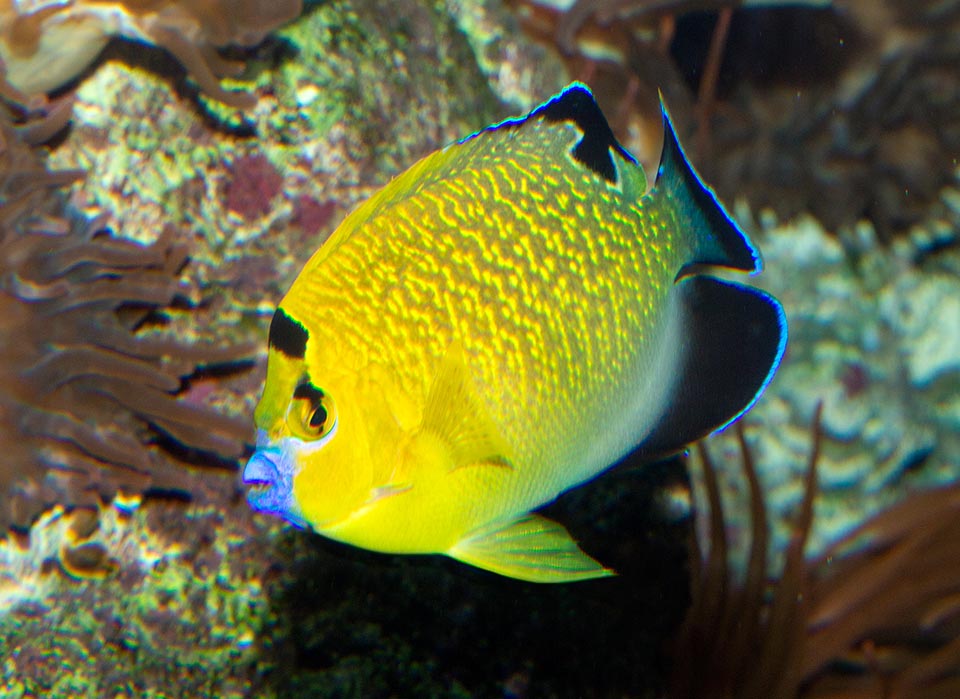 Live in small schools with a male controlling a small area and a harem. When dies, the biggest female of the group turns male and takes command © Giuseppe Mazza

Their feeding in aquariums is not easy, with frozen foods containing spirulina, small crustaceans such as Artemia salina and species of the genus Mysis plus, of course, possible sponges. It is useless to add that Apolemichthys xanthopunctatus is a fish that gets easily stressed, entangled in the landing nets with its small opercular spine and by sure is not immune to diseases like that of the “white spots”, caused by the flagellate Oodinium ocellatum or to the virus Lymphocystis that creates nodules on the fins and in the mouth.

Luckily, in spite of the catchings, justifiable only for the large pools of the public aquaria, in nature the population may double its membres, in 1,4-4,4 years and the species presents now (2020) a moderate vulnerability index, marking 33 on a scale of 100.