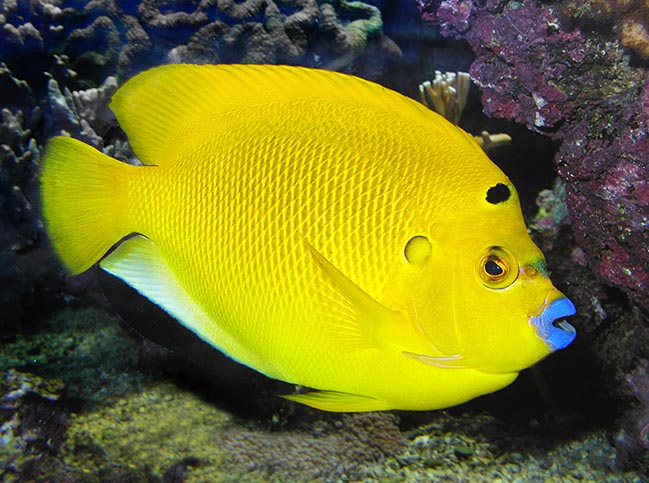 Common in aquariums the colorful Threespot angelfish (Apolemichthys trimaculatus Cuvier, 1831), belongs to the class of the Actinopterygii, the ray-finned fishes, to the order of Perciformes and to the colorful family of Pomacanthidae, the angelfishes, which count 8 genera and almost one hundred species..

The name of the genus Apolemichthys comes from the Greek “a” = alpha privative and “polemos” = war, and “icthys” = fish, it is, therefore, a “fish unsuitable for the war” due to the absence, unlike the Holacanthus from which it comes, of the interopercular spines.

Which does not mean that, like all the Pomacanthidae it has its long opercular spine, even if, to be fair, the same is little sharp.

The etymology of the species trimaculatus = with three spots in Latin, refers to the black spot on the head and to the two brown ocelli near the opercula. 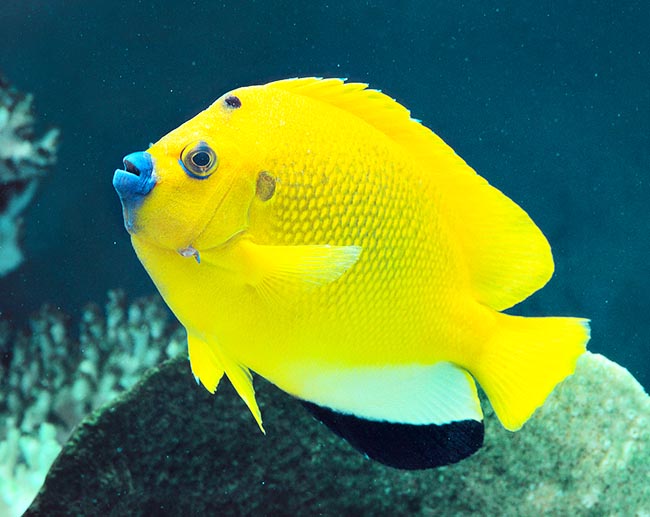 It is present in the Indo-Pacific tropical waters. We find it, indicatively, in South Africa, in Eastern Africa, in Somalia, the Seychelles Islands, the Andaman Islands, the Maldives, in Indonesia, New Guinea, Australia, Micronesia, Philippines, Taiwan and in China up to the southern part of Japan. Eastwards, it has colonized Vanuatu, Samoa, Tonga. Southwards, it has reached New Caledonia.

It lives in the lagoons, amongst the corals, in relatively shallow waters up to 60 m of depth.

The livery is yellow with a black spot on the head and the typical brown ocelli on the back of the operculum at the height of the eyes. 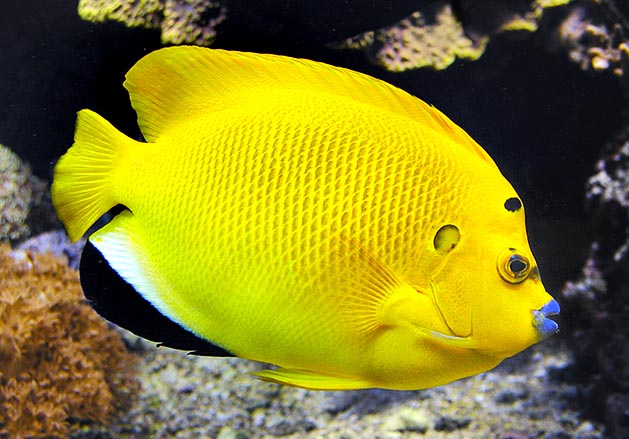 The juveniles have a false eye at the base of the dorsal fin, in order to mislead the predators, and have a black bar on the head crossing the eye with a clear camouflaging function.

The Threespot angelfish is a protogynous hermaphrodite species, which means that the females may change of sex once a certain size is reached.

The males are territorial and allow only the females to enter their zone. With time, they end up in forming a small harem of 4-5 partners with which they graze the seaweeds or nibble ascidians and sponges.

The Apolemichthys trimaculatus nourishes also of zooplankton, coral polyps and small fishes. This allows it to survive in aquarium with a diet initially based on the Artemia salina and, later, on shakes of mussels and shrimps, but it is not easy because it needs large spaces, does not tolerate the conspecifics and often attacks also the other guests. The eggs and the larvae are pelagic. In the wild, the populations double in 1,4-4,4 years and the species has a moderate vulnerability index, of 31 on a scale of 100.