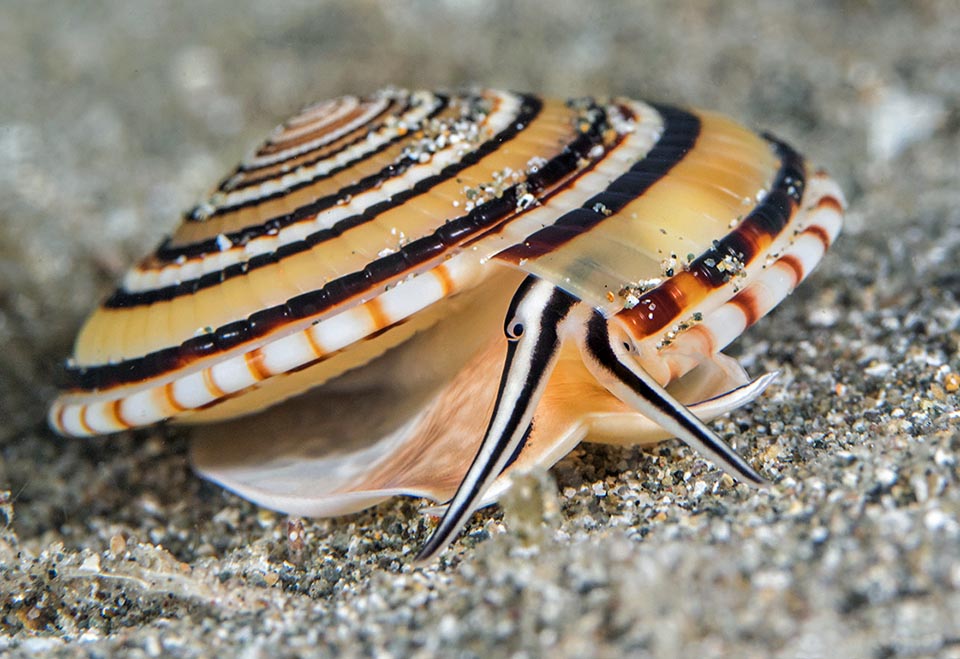 Too fished, Architectonica perspectiva is a tropical Indo-Pacific endangered species. It eats marine anemones, corals and cnidarians of the Zoantharia order © Rafi Amar

The Sundial shell (Architectonica perspectiva Linnaeus, 1758) owes its name to the sundial, an instrument for measuring the time based on the detection of the position of the sun, famous in old Egypt. Even if the shell of this small mollusc cannot be used as a sundial, its shape and its colours have rendered it famous among the collectors because it reminds the sun and the face of the sundial.

Architectonica perspectiva is a gastropod mollusc belonging to the family Architectonicidae, a group containing about 30 genera and 140 species distributed all over the world, and is the only family of gastropods to have such a particular structure of the shell. 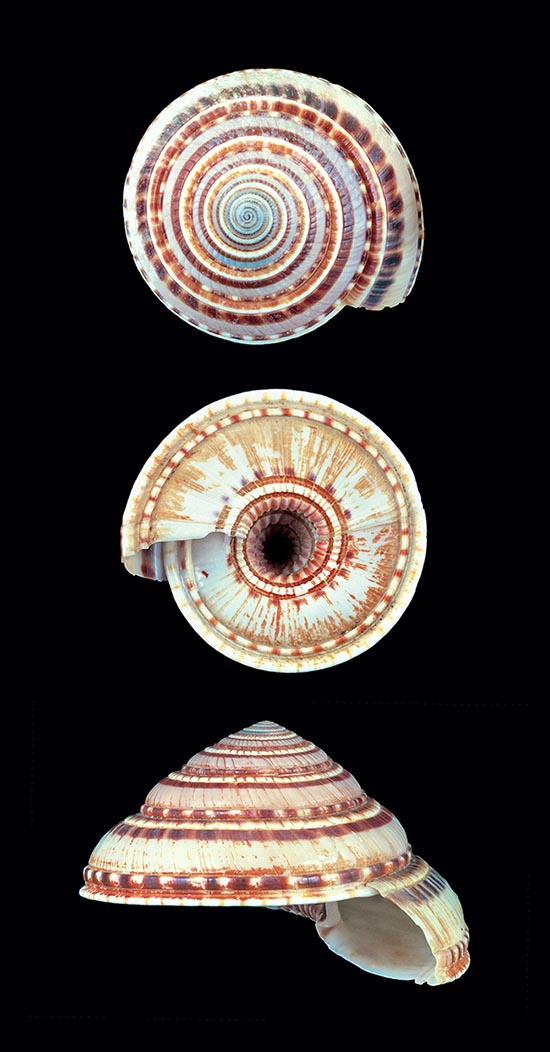 The shell may reach 8 cm. It looks like a flattened cone and displays on the lower pagina a characteristic hollow umbilicus that reminds us a spiral staircase © Giuseppe Mazza

It is distributed in the Indo-Pacific Ocean: from estern Africa, including Madagascar, Red Sea and the Persian Gulf, up to eastern Polynesia, northwards up to Japan and the Hawaii Islands, and from south to south-eastern Australia.

Architectonica perspectiva prefers the warm waters of the tropical and subtropical waters, where it may reach the depth of 120 m.

The round shape of the shell allows the snail to dig nimbly into the sand and the muddy bottoms in order to hide from the predators, even if it is possible to meet it between the corals, where the availability of food is greater.

It eats marine anemones, corals and cnidarians of the order Zoantharia. As the cnidarians do have as a defensive system some prickly cells containing a stinging substance, the buccal region is coated with a special cuticular covering that protects it from the stings.

The shell of the Sundial shell has the look of a flat cone, with black smooth or beaded spiral veins, that can reach a maximum diametre of 8 cm.

Also the body and its extensions usually present some black stripes in line with the ornaments of the shell.

Shining and with colours going from white to yellow-brown on the dorsal face, on the ventral the colours are darker and we can note a characteristic very wide hollow umbilicus, typical of this species and of the whole family.

This umbilical reminds a spiral staircase seen in perspective, a particular that has defined the name of the species.

They are simultaneous hermaphroditic organisms, which means that the individuals present in the same time male and female gonads, and lay the eggs in capsules incorporated in a gelatinous mass attached to the substratum.

Upon hatching, they release planktonic algae typical of the mollusks, called veliger, characterized by an intense pelagic life that may last even more than 6 months, in order to increase the dispersion of the species.

Architectonica perspectiva is a species classified as “endangered”. This is due to the uncontrolled collecting of the shell as well as to the always greater anthropocentric development of the beaches, causing a progressive reduction of the coastline and, where present, of the coralligenous.

Architectonica perspectiva was last modified: May 20th, 2021 by Giuseppe Mazza