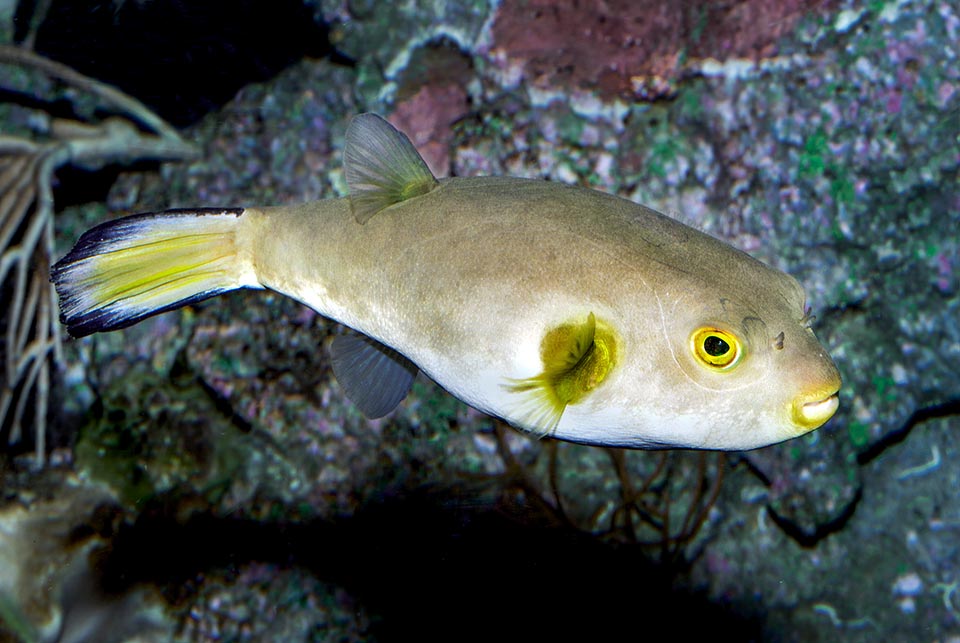 The Immaculate puffer fish,  Arothron immaculatus (Bloch & Schneider, 1801), belongs to the class of the  Actinopterygii, the ray-finned fishes, to the order of the  Tetraodontiformes, and to the family of the  Tetraodontidae, the most numerous of the group, that counts 28 genera and about 200 species, mostly marine, but present also in the fresh and brackish waters of the tropics.

The name of the genus Arothron, comes from the Greek “α-“ (a-), privative, and “ρόθρον” (rothron), = nostril. In fact, in these fishes the nasal polyps do not have openings, hence they are “without nostrils”, even if it seems that, in some way, they perform the olfactory functions.

The specific name immaculatus, immaculate in Latin, refers to the clear livery, without the fanciful drawings that usually characterize the pufferfishes. 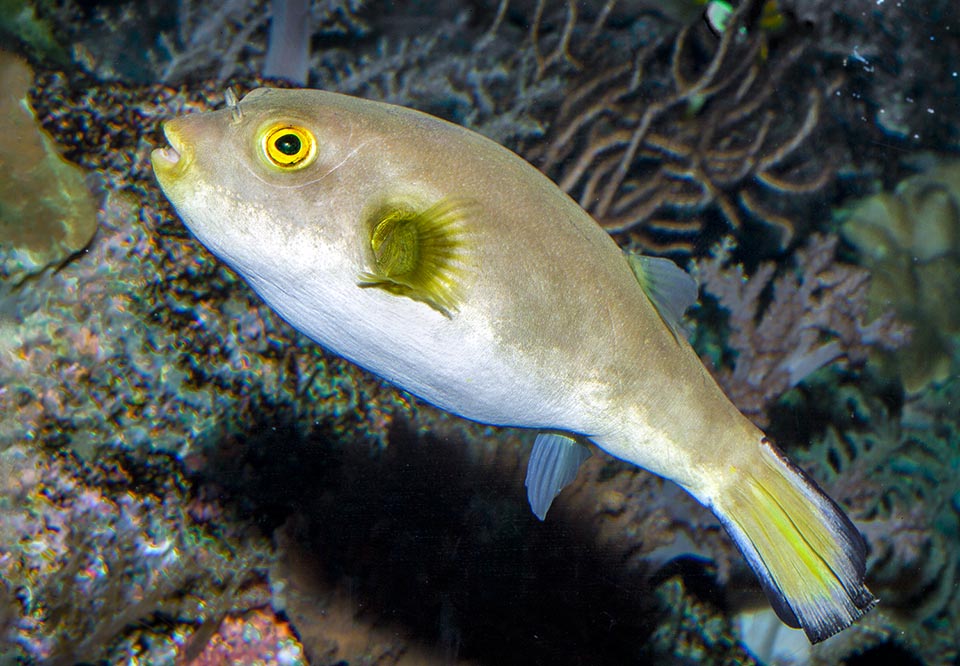 Arothron immaculatus has a quite vast distribution in the tropical Indo-Pacific. Indicatively, we find it from the Red Sea and South Africa up to Australia and Japan, which marks the northern limit of the species. Eastwards, it then reaches the coasts of New Caledonia, Vanuatu and Samoa.

It lives in relatively shallow waters, between 3 and 30 m of depth, in coral environments, but, mainly, on the sandy clastic bottoms and the seagrass meadows. It does not hesitate in venturing in the brackish waters of the estuaries and is often comfortable among the muddy roots of the mangroves rich in crustaceans and shells to nibble. 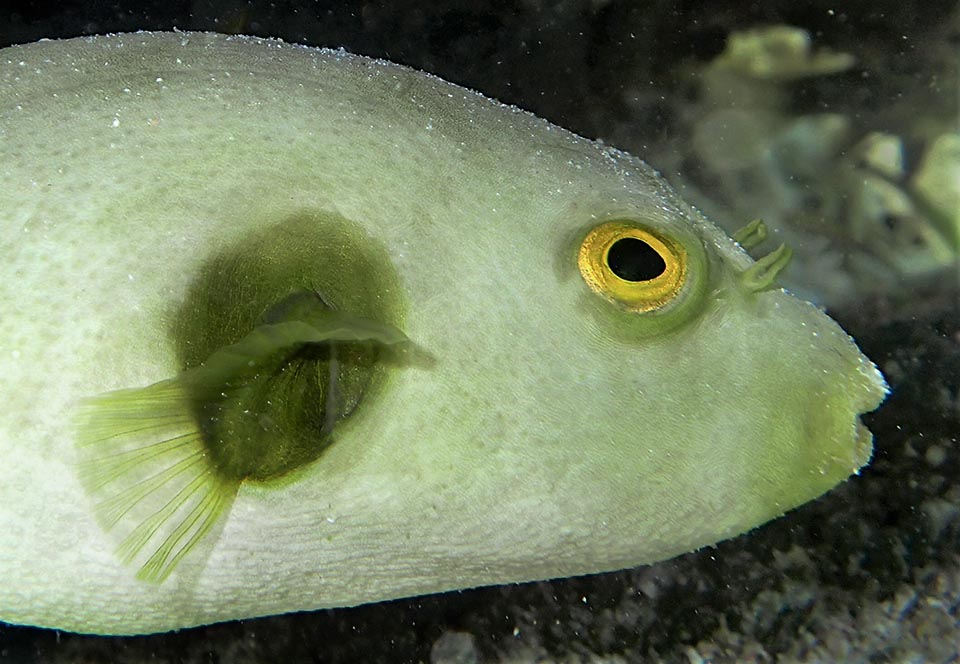 Only habit the golden eyes, the big dot at the pectorals base and two typical black traits on the upper and lower side of the yellow caudal © Dawn Goebbels

The body, approximately oval, does not exceed the 30 cm in length. Usually, it is brown-pale greyish, tending white towards the ventral side, covered, but the snout and the caudal peduncle, by small spines that replace the scales. At the base of the pectorals we note a showy brown-yellowish or black circular dot, and characteristic is the black border on the upper and lower sides of the yellow caudal fin.

The juvenile forms of the specimens living in the Pacific waters have dark longitudinal stripes on the abdomen and this could create confusion with Arothron manilensis which, however, has them well marked over the whole body.

Arothron immaculatus is therefore in its whole a fish with pale solid colour, at least till when it swims calmly in coral environments and its chromatophores do not intervene, creating, for mimicry reasons, dark mottled dots and greenish tones. 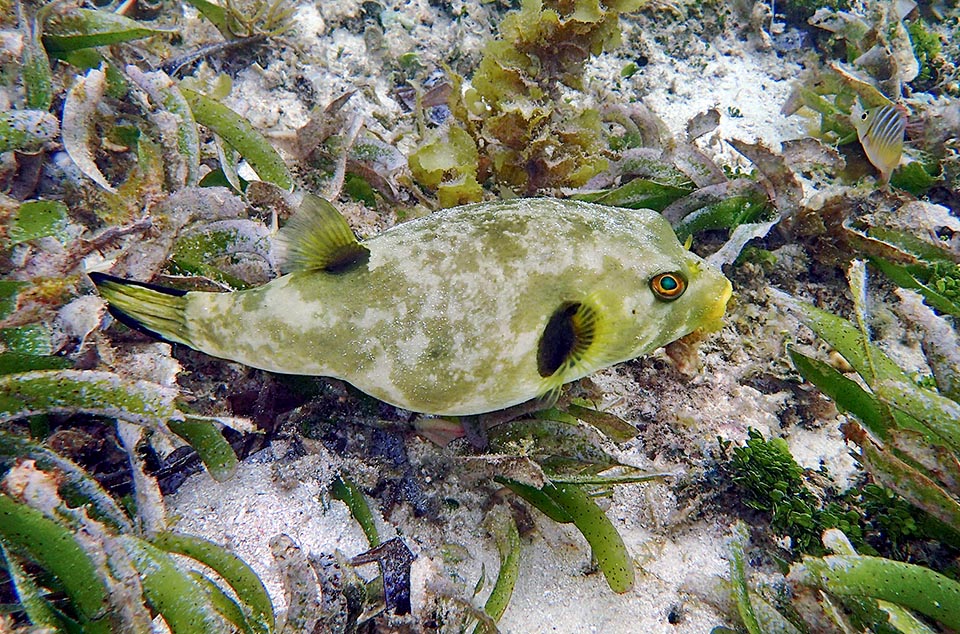 When, as here, it hangs out in submerged prairies, act however the chromatophores creating mimetic dots and colours © Dawn Goebbels

Then, we have to add, as remind the synonyms Dilobmycterus sordidus (Rüppell, 1829) and Tetraodon sordidus Rüppell, 1829, that, more than “immaculate” it is a fish often “sordid”, with a decidedly dirty look, seen its thick and thin spiny coat holds, with obvious mimetic advantages, also the mud where it moves.

The snout is short with two new holed tentacles, “Y” shaped, and like all Tetraodontidae the two teeth present on the jaws are merged in a plate forming a powerful beak. The yellow colour of the iris stands out so much that some call it Yellow-eyed puffer fish and also the lips are often yellowish. 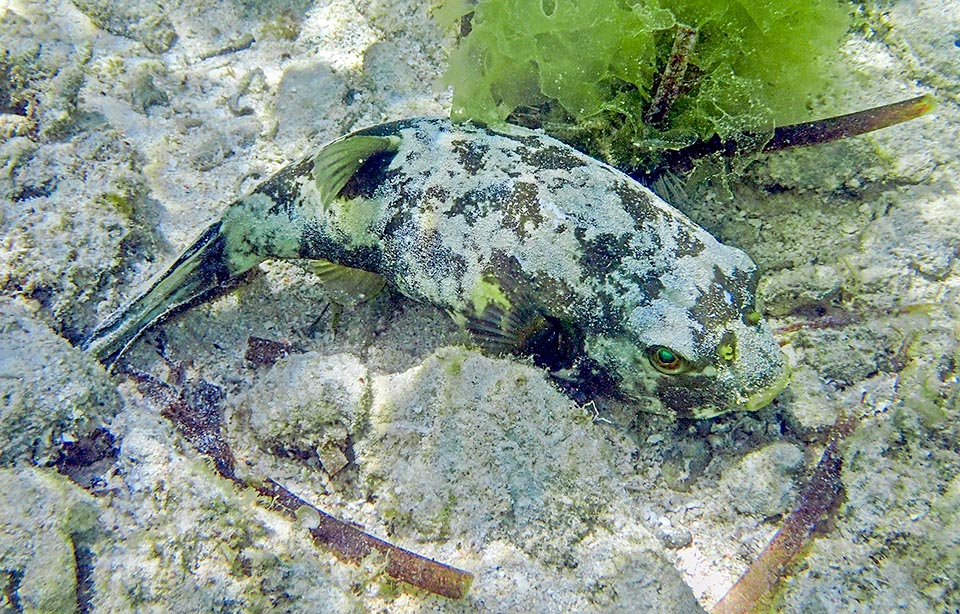 Here resting with yet different hues on clastic bottom, not immaculate at all, nay, dirty of mud, as evidence the two synonyms naming it “sordidus” © Dawn Goebbels

When in danger, like all puffer fishes, also Arothron immaculatus swells by swallowing water till it assumes an almost spherical shape. The stomach expands dramatically, while a membrane, blocked inside by the teeth, seals the mouth.

Obviously, when in these conditions it cannot swim any more, but surprises the aggressor because of the sudden change of size and it becomes much more difficult to catch. 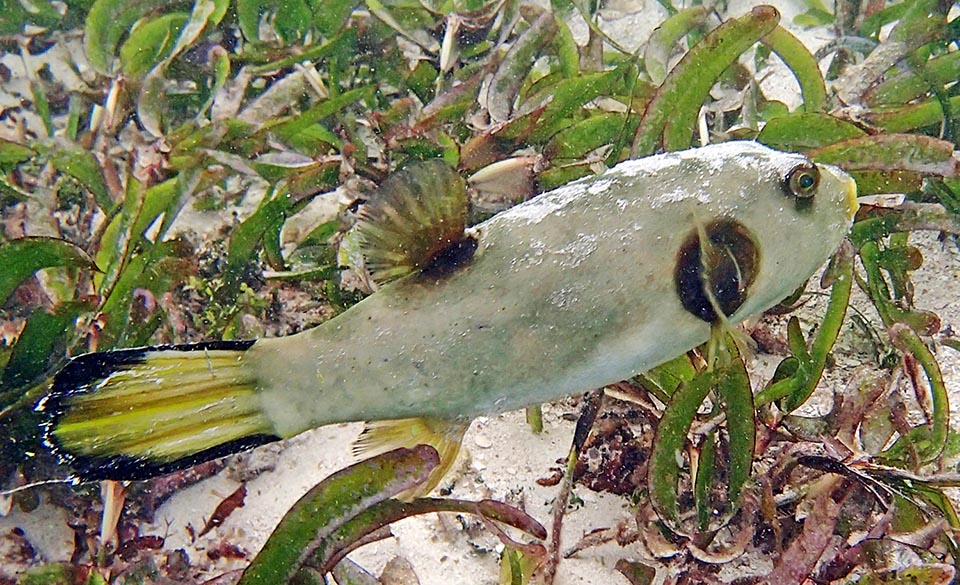 With two solid dental plates crushes, as if nothing, crustaceans, molluscs and sea urchins carapaces that form its choice dish, but also eats sponges and other benthic invertebrates such as sea urchins. Likes also the remains of dead animals and grazes plants and algae full of poisonous bacteria it hosts as symbionts © Dawn Goebbels

Moreover, this unusual look, typical to the puffer fishes, reminds the predators that the skin and the entrails contain the tetrodotoxin, poison hundred times stronger than the cyanide, that paralyzes the nerve centres by blocking the breathing.

It is produced by symbiont bacteria and concentrates mainly in the liver and in the gonads. If ingested, the eggs are almost always fatal. This is well known by the Japanese certified cooks who prepare the fugu, a typical local dish based on puffer fishes, throwing away skin, gonads, liver and bowel. It seems that the small quantity of toxin remained gives a slight euphoria to the clients with tingling in the lips and in the tongue. In fact, a test more of stupidity than of courage, like all drugs.

But experiments on guinea pigs with the flesh of the Immaculate puffer fish have shown that the muscular part is a food capable of contrasting the development of diabetes. In-depth studies on the matter are underway with the hope of a medicine. 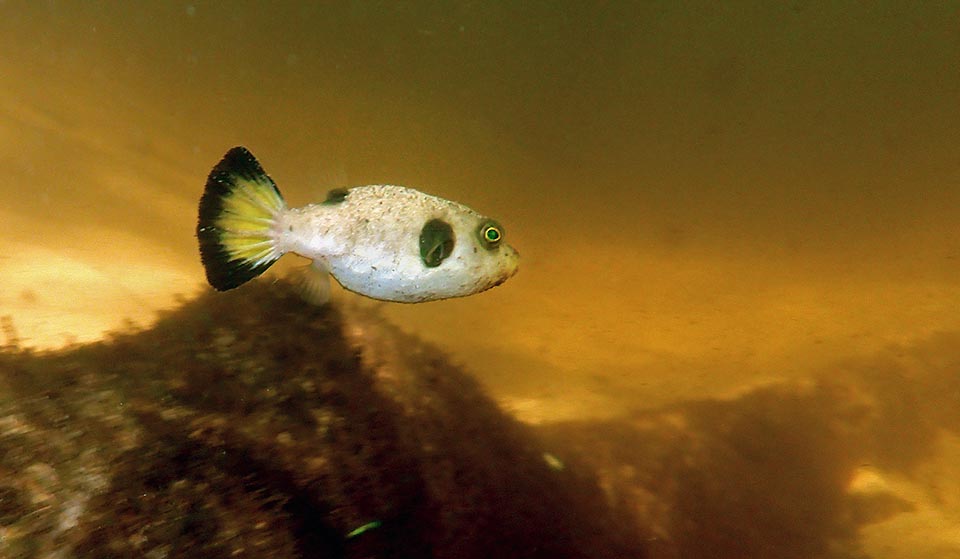 Young in moving turbid water of a mangrove coast. When in danger, like all puffer fishes, also Arothron immaculatus swells by swallowing water till it assumes an almost spherical shape. Obviously, when in these conditions, it cannot swim any more, but surprises aggressors for the sudden change of shape and is very difficult to catch. More, the entrails of these fishes cumulate the famous tetrodotoxin, poison 100 times stronger than cyanide that paralyzes the nerve centres blocking breathing © Dawn Goebbels

Arothron immaculatus nourishes mainly of crustaceans and molluscs, but also of other benthic invertebrates such as sponges and sea urchins. It does not disdain the detrita and grazes algae loaded with poisonous bacteria, marine herbs and mangroves.

For the reproduction, the male digs a nest in the sand to entice the female to lay and fertilize better the eggs. The resilience is good, with populations that can double in less than 15 months, and seen that it will never have food problems with such very vast diffusion, the vulnerability index is presently (2020), low, marking only 25 on a scale of 100.